Will Islam surpass Christianity by 2050?

Muslim population is projected to increase by 73 percent and make up 30 percent of the world’s population. Christians would make up 31 percent. 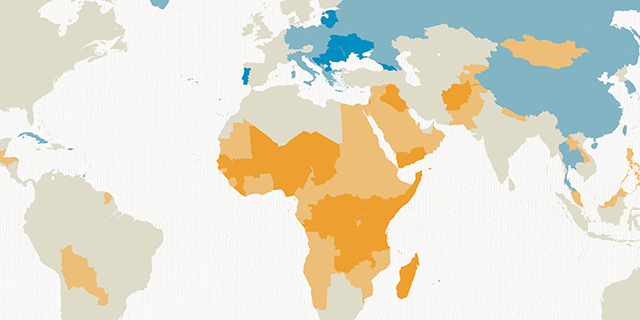 According to a new report from Pew Research Center, by 2050, followers of Islam will match those following Christianity, with the number of Muslims surpassing Christians globally by 2070.

The report explores expected changes from 2010 to 2050 in the size and geographic distribution of eight major religious groups: Buddhists, Christians, Hindus, Jews, Muslims, adherents of folk religions, adherents of other religions and the unaffiliated. 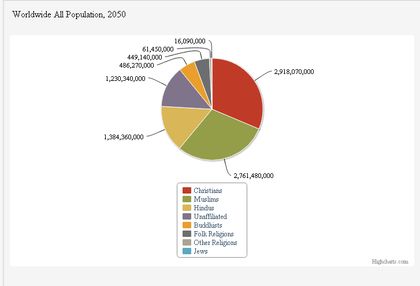 The study analyzes the projections from multiple angles, including sections on fertility rates, life expectancy, age structure, religious switching and migration. It also projects religious change in nearly 200 countries and territories and looks at how religious composition is likely to change from 2010 to 2050 in six different regions of the world

Pew reports that Christianity was the world’s largest religion in 2010, with an estimated 2.2 billion followers representing nearly a third (31 percent) of all 6.9 billion people on Earth, while Islam had 1.6 billion followers, the 23 percent of the global population. 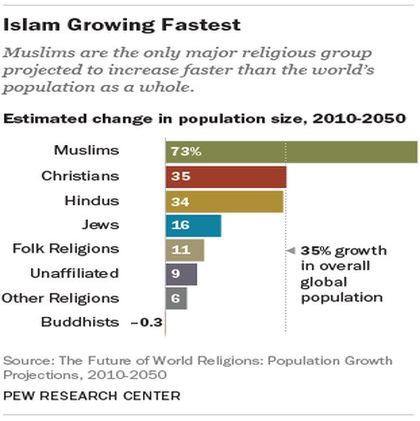 By mid century, Christianity would no longer be the main religion in countries like Australia, the UK, France, New Zealand and the Netherlands. The Christian population in the U.S. will decline by 12 percent (from 78 percent to 66 percent) in the same time period, while unaffiliated are expected to rise 10 percent (from 16 percent to 26 percent)

According to the study, the reason for this trend depends on several factors: Fertility, youthful populations and people switching faiths. The report informs Muslims have the highest fertility rate, with an average of 3.1 children per woman – compared with Christians at 2.7 children per woman. 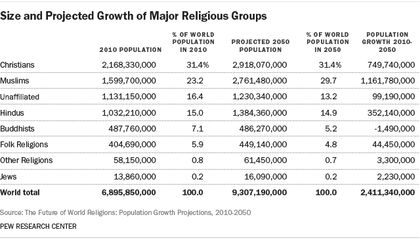 “The main reason Muslims are growing not only in number but in share worldwide is because of where they live”, Alan Cooperman, Pew's director of religion research, explained. “Muslim populations are concentrated in some of the fastest-growing parts of the world.”

In 2010, more than quarter of the world’s total population was under the age of 15. The Muslim population has the highest percentage of children younger than 15 years, which made up 34 percent compared to Hindus at 30 percent and Christians at 27 percent.

Atheists, agnostics and other people who do not affiliate with any religion – though increasing in countries such as the United States and France – will make up a declining share of the world’s total population.

The projections find that, if current trends continue, by 2050:

Published in: Evangelical Focus - world - Will Islam surpass Christianity by 2050?