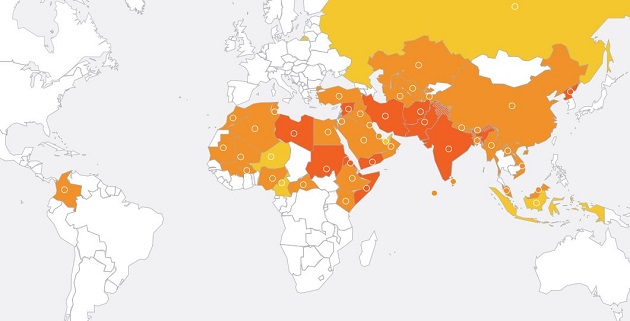 Open Doors International has released the 2020 World Watch List, which is led once again by North Korea, Afghanistan and Somalia.

The annual survey lists the fifty countries in the world where it is most difficult to live as a Christian. The analysis based on information collected between November 2018 and October 2019 shows that at least 260 million Christians living in 73 countries face a level of persecution measured as ‘extreme’, ‘very high’, or ‘high’.

Only last year, several tragic attacks against Christians made headlines. 250 were killed in three churches and hotels in Sri Lanka on Easter Sunday, and Christian leaders have been killed and kidnapped in Burkina Faso.

But the WWL also measures other types of persecution, in areas such as family and community life. “In some countries -- China and Eritrea, for example – it is governments that pressure Christians, sometimes with violence. In the Middle East, South-east Asia, East Africa and the Sahel, it is other forces that make life for Christians insecure. In the Sahel, especially, the rise of Islamist militancy has become a challenge not only to Christians but also to the existence of states and governments in the region, and thus to the rest of the world”.

MILIONS UNDER PRESSURE IN CHINA, INDIA AND IRAN

In China, state-sanctioned and ‘underground’ churches have been harassed or shut down in at least 23 provinces, in an increasingly hostile context. In Xinjiang, at least one state-sanctioned church is known to require congregants to queue for facial recognition checks.

In the 1,400 million country, “religion is banned from the public sphere; some teachers and medical staff have been pressured to sign documents saying they have no religious faith”. In some areas, says Open Doors, “elderly people have been told their pensions will be cut if they do not renounce their Christian faith. All this comes against a backdrop of increasingly all-pervasive surveillance via facial recognition and other technology”.

China, the country with largest number of Christians, has risen four places, from number 27 last year to 23. Read more news about China.

Another large and influential country, India, continues on number 10. “Hindu nationalist extremism has grown after the BJP-led government under Narendra Modi won a second term in May 2019”, says Open Doors. “The analysts of the World Watch List registered a minimum of 447 incidents this year. However, fewer Christians were killed than last year”. Read more news about India.

In Iran, 194 Christians were arrested, 114 in one week just before Christmas 2018, and several house churches were raided across nine cities. The country continues on number 9 of the WWL. Read more news about Iran.

These are the top 50 countries of the Open Doors 2020 World Watch List:

Christians in Algeria have experienced a very difficult year as authorities closed down a dozen of churches, including the largest community of the Protestant Church of Algeria (EPA) federation. Believers protested peacefully in the streets of Tizi-Ouzou and other cities, and the World Evangelical Alliance and other international organisations and international bodies such as the European Union highlighted their case. Read more news about Algeria.

Morocco, also in the north of Africa, also rose in the list. Despite timid signals of opening, pressure in all areas of life remains ‘very high’. Read more news about Morocco.

Burkina Faso “has risen faster and farther on the list than any other; in WWL 2019 it was not even among the top 50”, the Open Doors report says. “At least 50 Christians are known to have been targeted and killed for their faith. In the north, violent Islamic militants have singled out villagers wearing crosses to kill them. Churches, schools and Christian NGOs have been attacked, or have closed out of fear; militants attack with impunity”. The West African country was traditionally known for its religious tolerance and. Read more news about Burkina Faso.

In the next days, Evangelical Focus will publish further detailed analysis articles based on the Open Doors 2020 World Watch List.