Children and adults were trampled in an event of self-declared ‘apostle’ Boniface Mwamposa in Tanzania. The veneration of ‘miraculous’ products collides with Bible doctrine. 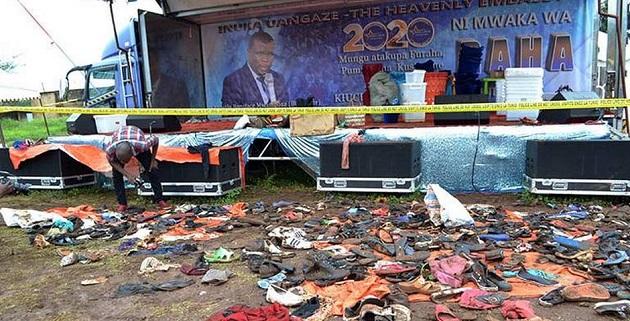 The site after the stampide in the north of Tanzania. / Reuters

The authorities of Moshi (a town north of Tanzania) are investigating what happened in an event organised by the group Rise and Shine and its leader, Boniface Mwamposa.

At least 20 people, including 5 children, died in a stampede during the religious activity. 16 others were injured.

In an event with hundreds of people, the preacher, who calls himself ‘Apostle Bulldozer Mwamposa’, invited attendants to walk on ‘anointed oil’, which according to his teaching, has curative characteristics. The rush to do so caused the trampling of over many people.

A witness told news agency AFP that the scene was “horrible”. People were “trampled on mercilessly, jostling each other with elbows (…) It was like the preacher had thrown bundles of dollars about”.

The pastor was arrested later for his role in the incident, news agency Reuters said.

Tanzania’s President John Magufuli sent his condolences and called for better security at such large events.

The Protestant Reformation abolished such ideas as the sacramentality of objects or rituals, establishing the Biblical base for a relationship with God by Grace through the sole faith in Jesus Christ, the only mediator. This excludes any other human or materials mediators.

Nonetheless, some congregations and spiritual leaders who call themselves evangelicals still use these kind of objects with alleged supernatural powers which clearly collide with the Biblical faith.