“There has always been persecution in China, it is not because of the coronavirus”

The Chinese Christian Church in Spain closely follows the religious freedom changes happening in its home country. “The government wants all evangelical churches to be subject to the organisation of the Three Autonomies”. 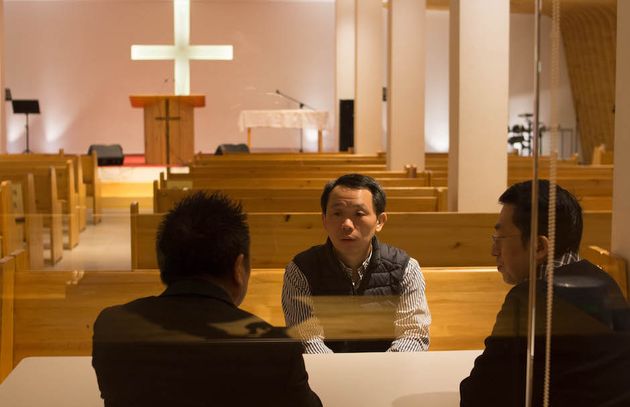 Koikam Fu, in the center, talking with Zhengbo Chen, on the left, and Rongen Li, on the right, in the premises of a Chinese church in Barcelona. / Jonatán Soriano.

This article is the second in a series of reports on the Chinese Christian Church in Spain. You can read the first one here.

Entering the premises of the Chinese Christian Church in Spain in Barcelona, it is easy to turn the attention to a thread that runs along the horizontal side of the left wall, from which hang photographs of groups of children, youth and adults.

Many photos that show the active routine that defines this community, from Sunday schools to camps, group meetings and concerts. In addition to being a spiritual congregation, the church also serves as a cultural bond and it is in constant contact with the rest of the Chinese population in the area.

“We will do our best in this epidemic to help those who are concerned, no matter who they are. Everyone expects the church to take care of them with the love of the Lord”, explains the pastor of the congregation, Koikam Fu.

The conversation for this article took place before the Spanish government decreed the state of emergency and implemented a series of preventive measures to combat the spread of the coronavirus.

However, China had already taken measures that restrict mobility, transportation and religious gatherings for weeks, something that is not new in the Asian country..

In fact, according to the magazine on religious freedom and human rights in China Bitter Winter, in addition to the closure of many places of worship to avoid contagions, many churches are not allowed to broadcast their religious services online either.

A law for the management of religious information on the Internet, of September 2018, stipulates that “no organisation or individual, including those authorised, may transmit or disseminate religious activities, including praying, burning incense, worshiping, or baptism, either online, by text, photo, audio, or video”.

“THE CENSORSHIP STRATEGY DOES NOT MAKE RELIGIOUS DISTINCTIONS”

It is difficult to bring up the issue of religious persecution in a conversation absorbed by the news of the coronavirus. But the leaders of the Chinese Christian Church in Spain themselves get to this point.

Rongen Li, pastor of another of the communities that the church has in Barcelona, points out that “all over China, worship services and large gatherings have stopped”.

“But it is not because of the coronavirus. Control is always there and there has always been a lot of persecution. It is not only the churches that have had to close, but everyody is at home. Businesses, schools, stores, all have closed, except hospitals and pharmacies. Especially in the Hubei area, where Wuhan is, the epidemic center”, says Rebecca Sun, who helps with the translation during the talk.

The president of the Chinese Christian Church in Spain, Zhengbo Chen, intervenes to explain that “only one person from each family can leave the house two days a week to buy food, and only for one hour”.

Despite acknowledging that “in the face of the epidemic, the censorship strategy is at the national level, without making religious distinctions”, they all know that “the Chinese government wants all evangelical churches to be subject to the organisation of the Three Autonomies. If they don't subscribe to that, the authorities go after them”, says Li.

On December 30, the official news agency of the Chinese government, Xinhua, published a brief statement explaining that the National Administration of Religious Affairs had published “a set of regulations on the management of religious groups”.

According to Xinhua, the measure stated that “the religious affairs departments of popular governments are the administrative organs of religious groups and should guide and supervise the operations of the different groups”.

The decision also determines “how religious groups should designate their official officers, carry out their work and manage their own affairs”.

Measures like this have led the organisation Open Doors to consider China as the 23rd country in the world where Christianity is most persecuted. Two years ago it was in 43rd place. In its latest report, published earlier this year, the entity reveals that China is the place where most Christian worship places were attacked or closed during 2019: 5,576 in total.

“The Chinese government advocates atheism with an attitude that resists God. Even if religious activities are allowed, they must be included in the government system. They want religion to serve political power; but from a biblical perspective this is often not God's will”, Chen says.

THE NATIONALIZATION OF RELIGION

In the evangelical sphere, the government only allows the existence of churches linked to the organization of the Three Autonomies.

The churches of this institution, Chen says, “seek to be autonomous in terms of preaching, not allowing the participation of foreigners but only of Chinese preachers”.

“Furthermore, they do not subscribe to any denomination but define themselves solely as a Chinese church, and are controlled by people of the country, without outside help or influence. They try to avoid contact with foreign Christians and they also do not receive donations from outside, they control their own finances”, he underlines.

“Even if a pastor from a Three Autonomous Church in one region has to go to another province to preach, he cannot do so without the organisation's prior supervision. You have to request a permit”, says the pastor.

According to Li, “the government hinders the work of those who do not want to submit to the Three Autonomies, or they directly do not allowed them to meet. They make you close or control you more closely”.

The Chinese government seeks a scenario of unanimity in the country's evangelical population, forcing them to integrate into the institution to continue to exercise their faith in community.

“They are putting video surveillance cameras in the churches of the Three Autonomies. In some, you even have to include political content in the middle of the service, like singing the anthem, putting the flag, and things like that. Those under 18 are not allowed to go to Sunday school”, Li stresses.

“THE VIRUS HAS TIGHTENED THE CONTROL OF RELIGIOUS FREEDOM”

Chen believes that this situation has become worse because of the coronavirus. It has “tightened the control of religion and personal freedom”.

China is also the country where most Christians have been sentenced to prison or labor camps, according to Open Doors, with 149 people in 2019.

“They do not control the churches outside China very much. We are quite free. Although some say that there are political agents outside China who could be spies”, says Fu with the moderate relief of someone who uses his religious freedom, but does so thousands of kilometers away from his native country.

Published in: Evangelical Focus - world - “There has always been persecution in China, it is not because of the coronavirus”

1
The terror of the Khmer Rouge
2
Pre-Millennialism, Post-Millennialism or Amillennialism?
3
The ‘Imprisoned Spirits’ of 1 Peter 3:19-20
4
10 differences between Martin Luther and John Calvin
5
980 hate crimes against Christians reported in Europe in 2020
AREOPAGO PROTESTANTE uses “COOKIES” in order to guarantee the proper functioning of our website, improve its security, obtain better efficiency and personalisation, collect statistical data and show you relevant advertising. Click “OK” to authorise its use . If you reject the use of “cookies”, AREOPAGO PROTESTANTE cannot guarantee the functionality of the website. Learn more about our COOKIES POLICY at the bottom of the page.