Philippine Christians say “care and compassion for the poor is needed”, not “shots”

President Duterte told security forces to “shoot to kill” those who disobey the preventative measures that have been declared by his government during the Covid-19 crisis. 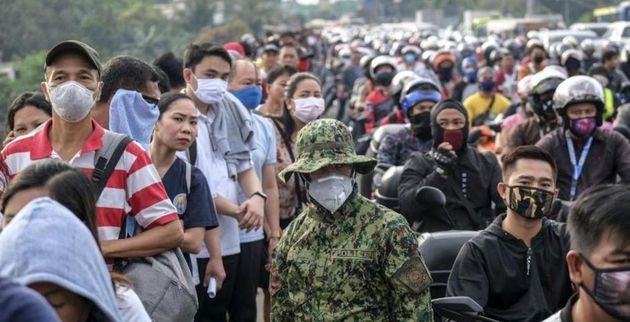 The Philippines is one of the countries in southeast Asia which has put in place one of the strictest security measures in the pandemic. / @Cronistacom

President Rodrigo Duterte from the Philippines has caused controversy, yet again, after a statement regarding the Covid-19 pandemic.

In a televised speech on 15 March, he told security forces to “shoot to kill” those who disobey the preventative measures that have been declared by his government.

“My orders to the police and military... If there is trouble and there's an occasion that they fight back and your lives are in danger, shoot them dead”, Duterte explained.

“Is that understood? Dead. Instead of causing trouble, I will bury you”, he threatened a group of about twenty people in the San Roque neighbourhood, in Manila, who were protesting in front of the police demanding that the government helps them to get by in this crisis born out of the pandemic.

The Philippines is one of the countries in southeast Asia which has put in place one of the strictest security measures in the pandemic. The government closed Luzon (the largest island in the archipelago where the capital Manila is located) to air, sea and land travel.

He put under curfew a population of 48 million people. The lockdown will last at least until April 14th and, during that period, schools, government offices, shopping centres, bars and restaurants will remain closed.

Duterte’s words caused an outcry amongst human rights organizations and student groups in the country. One of the first ones to publicly criticize the president’s statement was the National Council of Churches in the Philippines (NCCP).

This body denounced Duterte’s excesses, who has affirmed in the past that “God is stupid”.

“After listening to the President threaten the desperate and the hungry, as Christians, we insist that in this health crisis, care and compassion for the poor is what is needed. Callous remarks and threats are not what are needed right now, especially as Holy Week is fast approaching. What is needed is food,” said Bishop Reuel Norman O. Marigza, General Secretary of the National Council of Churches in the Philippines (NCCP.)

“The order of the President to 'shoot those causing riot' is sending a message that the government lacks genuine concern for our poor sisters and brothers who are growing desperate every day from hunger”, Bishop Marigza said.

The NCCP leader also raised concern over the government’s “fixation on arrests and imprisonment” in a time of a public health crisis.

Social media is abuzz over the fact that there were more than 17,000 people arrested while there were only around 3,000 who were tested for Covid-19. “Mass testing and a systematic distribution of food and other assistance is imperative right now”, Marigza added.

EVANGELICAL CHURCHES GET READY TO COPE WITH THE EPIDEMIC

For its part, the evangelical churches published a statement a few weeks ago in which they offer guidelines for the present confinement.

“The spread of the virus, needless to say, has also brought challenging questions related to the religious life of Filipino”, says the document, signed by Noel Pantoja, national director of the Philippine Council of Evangelical Churches (PCEC).

“First, we must consider the Hebraic understanding of the holistic human self. Careful readers of the Old Testament, particularly the Holiness Code in Leviticus 17-26, will notice that God is concerned with humanity’s holistic well-being. We must make sure that our decisions and actions consider the well-being of the community we belong to. We must be willing to refrain from doing things that endanger the life and well-being of others”.

The PCEC also stressed that “zeal and knowledge must go together”, requesting the communities “consider facts as God’s signposts to guide us in making faith-based decisions”.

They recommended that Christian groups to follow the government and WHO’s advice to “avoid organizing large gatherings and going to large crowds” and affirmed that “the church must become a part of the solution, and not be another problem”.

The Evangelical body did not ignore the issue of social and humanitarian help and affirmed that “we must make every effort to take care of our bodies and the health of others”.

Published in: Evangelical Focus - world - Philippine Christians say “care and compassion for the poor is needed”, not “shots”