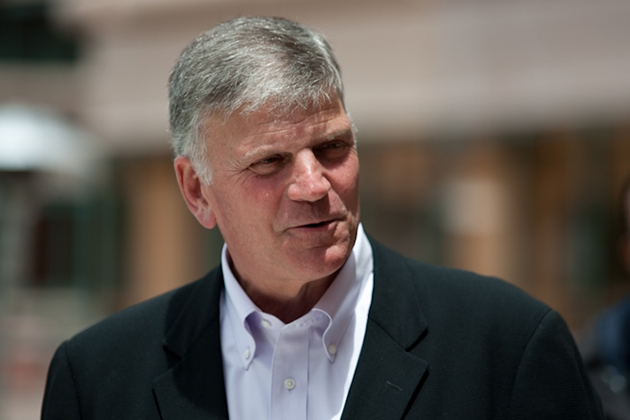 Leading Christian evangelist Franklin Graham has been hitting the headlines in the USA after revealing that the Billy Graham Evangelistic Association will be changing Banks following Well Fargo’s recent pro-lesbian advertising campaign.

Speaking from his 1.6 million-strong public Facebook page, Graham called upon Christians throughout the United States and beyond to begin boycotting businesses which are actively promoting homosexuality.

His status, which has already been liked almost 100,000 times and shared over 40,000 times since Friday, said the following:

“Have you ever asked yourself–how can we fight the tide of moral decay that is being crammed down our throats by big business, the media, and the gay & lesbian community? Every day it is something else! Tiffany’s started advertising wedding rings for gay couples. Wells Fargo bank is using a same-sex couple in their advertising. And there are more. But it has dawned on me that we don’t have to do business with them. At the Billy Graham Evangelistic Association, we are moving our accounts from Wells Fargo to another bank. And guess what—we don’t have to shop at Tiffany & Co., there are plenty of other jewellery stores. This is one way we as Christians can speak out—we have the power of choice. Let’s just stop doing business with those who promote sin and stand against Almighty God’s laws and His standards. Maybe if enough of us do this, it will get their attention. Share this if you agree.”

Wells Fargo, the bank in the midst of the controversy, has since emphasized its respect for the diversity of every client.

Graham, however, responded in an interview with the Observer, by saying that he is not against doing business with corporations that serve gay customers but with companies that are openly extolling a homosexual lifestyle.