According to the Evangelical Fellowship India, “lynching, threatening, community ostracization and disruption of gospel services” are the most common incidents. The lack of legal literacy and the reluctance of police to register cases means that many other attacks are not reported. 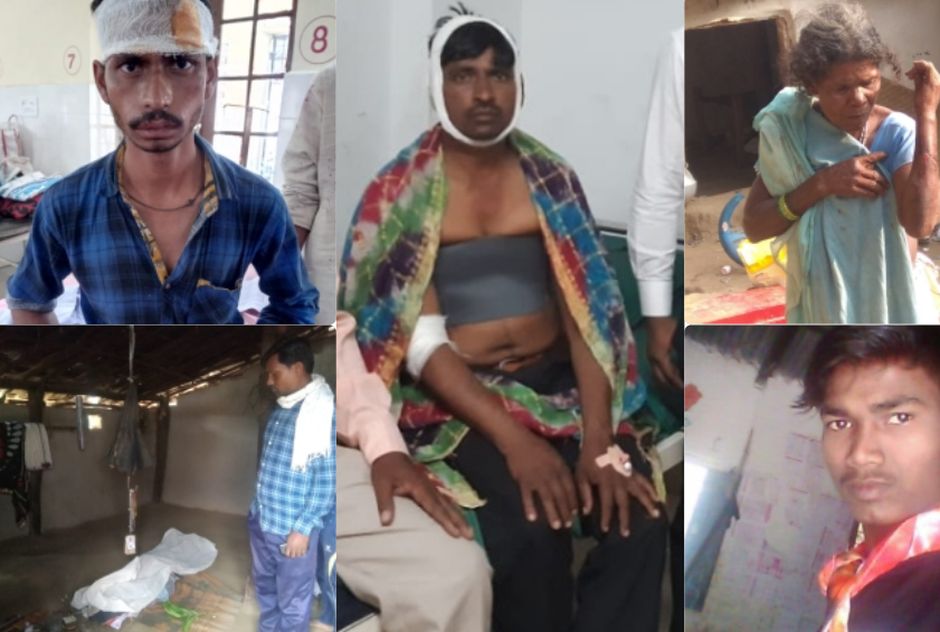 Images of incidents against Christians in India in 2020 collected by the EFI Religious Liberty Comission report. / EFI

The half yearly report of the the Religious Liberty Commission of the Evangelical Fellowship of India (EFIRL), confirms that there have been 135 cases of hate and violence against Christians in the first six months of 2020.

“The absolute sense of impunity generated in the administrative apparatus of India by the Corona pandemic lockdown, and the consequent absence of civil society on the streets and in the courts, has aggravated the environment of targeted hate and violence against Christians in India major states and the capital”, the report points out.

According to evangelical entity, “lynching, threatening, community ostracization and concerted efforts to stop worship and gospel-sharing” are the main incidents against Christians in India.

They also denounced that “the victims have no recourse to the normal systems of reporting to the police, and severely restricted access to courts for relief”.

The EFIRL explains that “the near collapse of the media, the inability of activists to go to distant villages because of the lockdown and the restrictions on transport, has severely constrained accurate collection of data of the persecution of religious minorities”.

“Especially in extraordinary situations of social isolation as under the Covid curfew, the Christian community questions how safe they are if the Muslims are so brutally targeted by religious political fanatics structured in seemingly well organised formations on the social media”, it underlines. 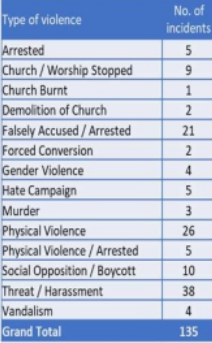 Main incidents against Christians IN 2020./ EFI.

“Crime is either unreported, or under reported”

The EFIRL stresses that “it is important to point out that the numbers of cases recorded by the EFI network and other Christian groups are only indicative, and the actual numbers may be much larger”.

“Even in normal times, the police were loath to register cases. Communally motivated crime is either unreported, or under reported. The situation has worsened”, they add.

For the EFIRL, “the reasons for underreporting are fear among the Christian community, a lack of legal literacy and the reluctance/refusal of police to register cases”.

“The police have been very reluctant and slow to register cases involving cognizable offences despite being duty-bound to do so under the Code of Criminal Procedure. Even in the cases registered with the police, most never come to court”.

They point out that “there have been many other indications from the government and the ruling party of changes in laws and many policies, which will impact the Christian community together with other marginalised groups in many ways”.

Uttar Pradesh and Tamil Nadu once again the worst regions

As in the previous years, “Uttar Pradesh has the dubious distinction of topping the persecution scale with 32 cases of hate crimes. The southern state of Tamil Nadu also made headlines with some very troubling and terrible cases of violence”.

Meanwhile, “the tribal states of Chhattisgarh and Jharkhand, where the governments changed with the defeat of the BJP in the elections in 2019, saw a renewed spurt of persecution with 24 and 10 cases on our records”.

The report also presents recommendations to “ensure the rule of law and the security of religious minorities in India”.

It appeals to the government of India and the local governments of the states named in the report “to ensure stringent action under criminal law against all those who channel hate speech with the intention of of inciting violence and hatred against the Christian community and other minority groups” .

They also call on them to “prosecute police officials who fail in their constitutionally mandated duty to enforce the law of the land [..] and conduct sensitization programs for the police officials regarding laws on religious freedom as envisaged in the Indian Constitution” .

The EFIRL “especially asks the state governments of Uttar Pradesh and Tamil Nadu, to deal stringently with the various right-wing organizations operating in these states whose primary agenda is to create an atmosphere of fear among the Christian community and other religious minorities”.

Published in: Evangelical Focus - world - 135 incidents against evangelicals reported in India in the first half of 2020