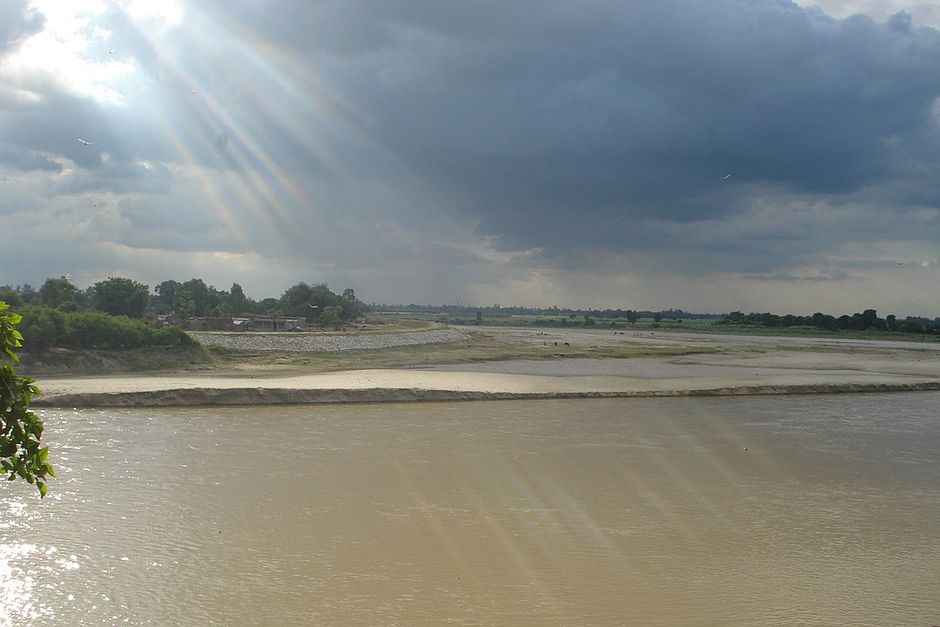 Police who did nothing to stop a fierce attack on a church service in Uttar Pradesh, India also beat and threatened the Christians while arresting them under false accusations of fraudulent conversions, sources said.

A mob of 15 to 20 Hindu extremists earlier this month assaulted men, women and children of Heavenly Gospel Mission Church in Shahjahanpur District, with some saying, “We will continue to hit you until you abuse and curse Jesus”, church members said.

After beating the seven men of the congregation with wooden batons and the 10 women and 10 children with the church chairs, they dragged four Christians and the Hindu owner of the rented building outside and threatened to kill them as they further assaulted them near parked police cars with officers who did nothing to stop them, according to a Christian identified only as Rajat in a video on social media.

“We were dragged out barefoot with threats by the attackers who told us that they will break our hands and legs and kill us”, Rajat said on the video.

Church pastor H.S. David told Morning Star News that the assailants did not ask them anything when they burst into the Jan. 3 worship service, but only pulled down the metal sliding gate so that none of them could escape and began beating them as they cursed Christians and Christ.

“They literally dragged five of us [including the Hindu owner of the hall] from inside the hall to the road outside; the beating only intensified there”, Pastor David said.

He added: “They forced us to be in the Murga position [translated “Rooster,” a stress position for punishment in parts of the Indian subcontinent] and then kept on beating us with sticks and their legs”. Soon police officer J. Pratap Singh arrived, according to Rajat.

“The policeman never asked us why we were being beaten”, Rajat said in the video. “Instead, Singh started to beat us with a baton before he arrested us. He even verbally abused the Christian women standing there and threatened to arrest them as well”.

“He then proceeded to beat us”, Pastor David told Morning Star News. “He was completely hand-in-glove with the extremists who were pressing him to book us. Though we were inside the police station, we did not feel secure in the presence of the police. We were very scared”.

When police took the injured Christians to a medical clinic, the doctor declined to treat them, Pastor David said. “The doctor never even touched us”, he said.

“He just asked us verbally where we were hurting and wrote something on a paper and handed it over to the police. We did not even get to read what he had written”.

Officers then took them back to the police station, where they were forced to sign two documents, he said. “We could not get to read what was written on them for the police were forcing us”, Pastor David said. “We do not know what we signed”.

After making the Christians wait a little longer, police released them at about 8:30 p.m., after confiscating some of their belongings: four Bibles and Christian literature, as though they were evidence to accuse them of forcible conversion, along with a keyboard, table, diary and other items, he said.

Congregation members were as emotionally traumatized as physically injured, said the pastor, who sustained several internal and external injuries.

“I have swelling in my legs because of the beating. I was hit on my buttocks and back with batons both inside the church and outside”, Pastor David told Morning Star News.

“They kicked my chest. The police beat me up very hard on my thighs, and I was repeatedly slapped. Because of the slapping, one of my ears is discharging some fluid. I am unable to sit properly”.

When the assailants had taken the four Christians and the Hindu outside the worship hall to continue the assault, they told them the hitting would continue unless they praised the Hindu god Rama and cursed Christ, he said.

“We were already so much in pain, and the assaulters would just not relent”, Pastor David told Morning Star News with visible anguish. “After the physical torture did not come to an end, we decided to do what they were forcing us to do – we cursed Lord Jesus Christ”.

The pastor said he and other men who were the first to be assaulted did not find out until later, to their shock, that the women and children were also beaten.

“We were dealing with our own injuries while being beaten mercilessly – we did not realize that women and children were also being attacked in a most ruthless manner as well”, Pastor David said.

“One of the attackers was beating a 5-year-old child’s father, so he ran and begged him not to hit his father, but the attacker hit the child, and he flung and fell at a distance”.

All the children were beaten, and mothers attempting to protect them were hit even more, church members said.

“Whatever they found, they hit us with it,” said a sobbing 18-year-old identified only as Neha, who suffered a broken bone in her hand. “They hit us with chairs, a table, wooden sticks, legs and fists. They showed no mercy. They hit men, women and children alike.”

Her 6-year-old sister was also beaten, she said. “My mother and I, along with my five younger sisters, were inside the church when the attack took place”, she told Morning Star News. 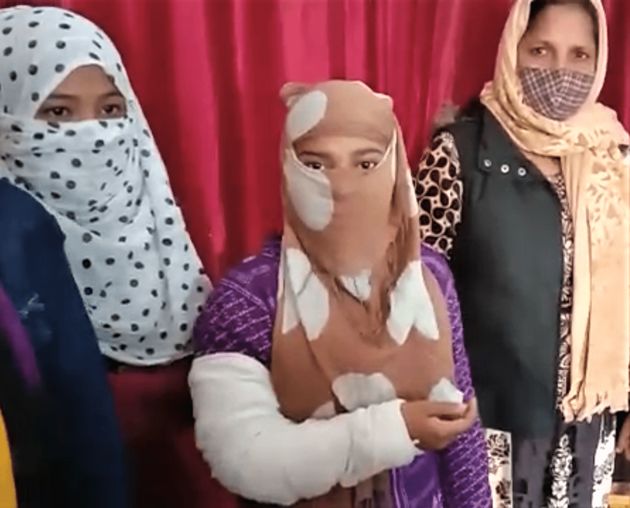 Hindu extremists broke the hand of a girl, in an attack on her church in Shahjahanpur. / Morning Star News.

“All my sisters were beaten including my youngest, who was hit by a chair and sustained internal injuries. My mother was also beaten when she tried to question the attackers as to why they were ruthlessly hitting the brothers”.

Neha said she did not know what struck her. “Someone hit me from the back. I don’t know if he used a chair or a wooden baton,” she said. “There was a lot of chaos. We were all crying and trying to safeguard little children”.

Neha, who no longer has a father, said the pain in her hand has impeded her ability to take care of her home and younger sisters while her mother goes to work every day.

“There is so much pain in my hand that I wake up in the middle of the night and cry because of the severe pain,” she said.

Hearing the commotion, the Hindu landlord of the hall that the Christians rent, Suresh Gupta, came running and tried to reason with the assailants, the pastor said.

“Suresh told the Hindu extremists that we were good people and that we have never tried converting anyone, but they became terribly angry at him and started beating him as well”, Pastor David said. “They accused him of betraying their community”.

It was then that the Hindu mob dragged Gupta and the four Christians – Pastor David, Rajat, Jagan Kumar and another identified only as Ajay – out of the hall to continue assaulting them outside.

Before police released the Christians, a leader of the Hindu extremist Vishwa Hindu Parishad (VHP, or World Council of Hindus), Rajesh Awasthi, approached Pastor David and threatened him.

Shahjahanpur police charged the Christian victims of the assault under Section 3/5(1) of Uttar Pradesh’s newly enacted “anti-conversion” law with “unlawful conversion from one religion to another by misrepresentation, force, undue influence, coercion, allurement or by any fraudulent means or by marriage”.

Ramlakhan Verma is named as the complainant. Pastor David said he does not know the person who filed the complaint and has never seen him. The First Information Report (FIR) filed against the Christians “is completely frivolous”, he said.

“We are poor people and live in a poor colony – how can we allure anyone with money or material [to convert]?” Pastor David said. “We are dependent on God for our daily sustenance. But they have cooked up charges against us”.

Police did not provide a copy of the FIR to the Christians, and when Pastor David sought to file a complaint about the assault against the Hindu extremists, the officer refused to accept it, said Prem Joel, a local Christian leader from the nearby city of Bareilly who along with other Christian leaders reached Shahjahanpur the evening of the attack.

“Pastor David wanted to file a complaint with the police and even gave a handwritten complaint, but the police refused to accept it,” Joel said. “The police officer is clearly siding with the Hindu extremists, and the behavior of the police is very disappointing”.

Joel and about 70 Christian leaders met with the superintendent of the police on Jan. 6 and submitted a memorandum, but he only suggested they talk with the very officer who beat them, he said.

The Christians also met with and gave a memorandum to the district magistrate, who assured them he would take action within three days, but nothing happened, Christian leaders said.

A local source speaking on condition of anonymity told Morning Star News that a minister from the Bhartiya Janata Party (BJP) is putting a lot of pressure on authorities in this case.

“An officer from the police department told me that shortly before the new year, a meeting was called by the state government, and they were told to not let any conversions happen at any cost”, the source said. “They were also told to bring the converted back into the Hindu fold”.

Police comment on the allegations against them could not be obtained due to security concerns.

Pastor David has received reports from the area Christians that Hindu extremists were searching the area for Neha, he said.

“On Jan. 5, the attackers came to Neha’s colony and were searching for her”, he said. “We do not know for what. They also came to my colony but did not find me”.

The next day police officers came to his area and were heard saying that the Hindu extremists should “cut the pastor in pieces” and they “would take care of the rest”, sources said.

The Sunday before the Jan. 3. assault, a man had shown up and recorded a video of worship service, Pastor David said. “When we confronted him and asked him what he was doing, he shouted at us and threatened us”, he said.

The hostile tone of the National Democratic Alliance government, led by the Hindu nationalist BJP, against non-Hindus, has emboldened Hindu extremists in several parts of the country to attack Christians since Prime Minister Narendra Modi took power in May 2014, religious rights advocates say.

India ranked 10th on Open Doors’ 2021 World Watch List  of the countries where it is most difficult to be a Christian, as it was in 2020. The country was 31st in 2013, but its position worsened after Modi came to power.