Ancient Sumerian proverbs in light of its biblical counterpart

The tablet itself consists of 3 fragments that are pieced together, and 102 of the original 202 proverbs are preserved and legible. 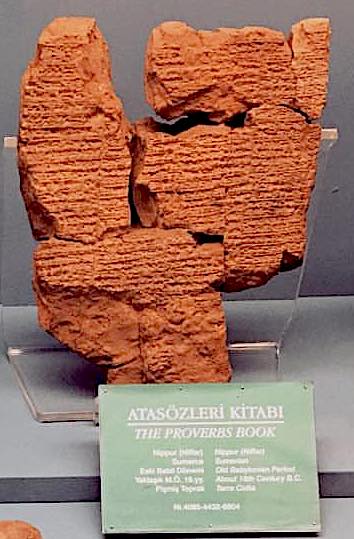 The Proverbs collection displayed in the the Ancient Orient section of the Istanbul Archaeological Museums belongs to the Isin Larsa period, approximately 1900 to 1800 BCE.

However most of these proverbs are probably older and were most likely past down from generation to generation as part of an earlier oral culture.

The tablet was most likely used in the education of scribes. Copying proverbs was an often used exercise by apprentices to perfect their writing. Many of these tablets tended to display clumsiness.

However, given the quality of the writing on this particular tablet, it is possible that this was a master copy written by a master. The translation of this tablet can be read below.

1.3 Don't cut the neck of that which has had its neck cut
1.7 To destroy something is in the power of God. There is no escape.
1.8 "Let my bread be left over, let me eat your bread!" Will this endear a man to the household of his friend?
1.9 If bread is left over, the mongoose eats it. If I have bread left over, a stranger consumes it.
1.11 You don't speak of that which you have found. You speak of that which you have lost.
1.12 Something which has never occurred since time immemorial: Didn't the young girl fart in her husband's lap?
1.14 Don't talk about what hurts you!
1.15 Wealth is far away, poverty is near.
1.16 He who possesses many things is constantly on guard.
1.18 Wealth (like) migratory birds never finds a place to settle.
1.28 When a purchase is settled, it is soon out of mind.
1.47 Although the pea-flour of the home-born slaves is mixed with honey and fine oil, there is no end to their lamentations.
1.48 (Coarse) barley-flour in the fields is meat and fat.
1.52 There is no baked cake in the middle of the dough.
1.65 In the city of no-dog, the fox is overseer.
1.66 In the city of the lame, the halt are couriers.
1.74 Things are traded in the city, but (it was) the fishermen (that) caught the food supply.
1.76 Like a clod thrown into the water, may he perish as he slowly disintegrates.
1.81 To accept a verdict is possible. To accept a curse is impossible.
1.82 What has been spoken in secret will be revealed in the women's quarters.
1.85 (If) the oars of a boat [slip into the water(?)], one must handle it like a raft.
1.89 Like a boat, he always comes up in the water.
1.91 My girlfriend's heart is a heart made for me.
1.103 He who eats too much cannot sleep.
1.105 A heart never created hatred, speech created hatred.
1.146 Marry a wife according to your choice! Have children to your heart's desire.
1.151 In marrying a thriftless wife, in begetting a thriftless son, an unhappy happy heart was assigned to me.
1.154 A thriftless wife living in a house is worse than all diseases.
1.157 A disorderly son, his mother should not have given birth to him. His god should not have created him.
1.159 An unfaithful penis matches an unfaithful vulva.
1.160 Marrying is human. Getting children is divine.

The Sumerian collection discussed here exhibits some similarities with biblical wisdom literature, particularly with the book of Proverbs. These collections were often loosely strung together, with little or not thematic unity to the collections.

Both traditions crafted some of the proverbs in a two-part form. The first part presented the advice; the second part provided the reason or motivation for following the advice.

However, one should be cautious about assuming any direct dependence.

When compared pared with the biblical wisdom literature, these collections demonstrate the extent to which Israel was a part of the ancient Near Eastern world.

Ancient proverbs reflect the worldview and way of thinking of ancient societies. Here is perhaps where a striking contrast appears between this Sumerian collection and its Biblical counterpart.

The Sumerian Proverbs collection is interesting in the way it reflects somewhat of a fatalistic attitude to life. Enjoyment of life is outweighed by laments and complaints that one is powerless to change certain fixed things.

These attitudes provide a striking resemblance the search of significance in modern man, but also contrasts deeply with the attitude towards life we find in the book of Proverbs.

One of the leading thematic elements in Proverbs is that man is not left alone in this world to figure out things on his own. God’s gift to man is His wisdom. Wisdom is given to us as a companion in this life to help us make the right choices.

Acquiring wisdom is simple. The fear of the Lord is the beginning of wisdom (Prov. 9:10). When the Biblical author speaks of fear, he doesn’t emphasize terror. Rather, he concentrates on aspects of awe, reverence, and humility: "Toward the scorners he is scornful, but to the humble he gives favor" (3:34).

It is this attitude that God cherishes in man, and it is to these that God provides grace and wisdom.

Wisdom is like an overflowing fountain of life. In finding Wisdom one gains insight into the Words of God (Prov. 30:3-6), is satiated and learns to enjoy life: “Come, eat of my bread and drink of the wine I have mixed. Leave your simple ways, and live, and walk in the way of insight.” (9:5-6).

Life itself is not viewed as a fatalistic chain of events in which we have no choice or say. The Book of Proverbs is structured as a set of instructions from a father to his son (1:8).

If the son choses Wisdom and Fear of the Lord he will live a successful and peaceful life. If the son choses the way of folly and evil (the diametric opposite of wisdom), he will experience ruin and shame. Note the aspect of choice. The fate of the child lies in his own hands. Unlike Mesopotamian thinking he is capable of changing his destiny.

This approach is very reminiscent of God’s words to Israel in Deuteronomy 30:15-18, “See, I have set before you today life and good, death and evil. If you obey the commandments of the Lord your God that I command you today, by loving the Lord your God, by walking in his ways, and by keeping his commandments and his statutes and his rules, then you shall live and multiply, and the Lord  your God will bless you in the land that you are entering to take possession of it. But if your heart turns away, and you will not hear, but are drawn away to worship other gods and serve them, I declare to you today, that you shall surely perish”.

Another important distinction is found in the portrayal of the feminine. Now, while in the Sumerian proverbs women tend to be viewed perhaps as a way to satisfy man’s desires. The Biblical Proverbs portray Wisdom as the voice of a woman! Wisdom is a guide, a companion. She is associated with creativity, prudence, discipline, discretion, strategy, good sense and competence.

Of chief importance, however, is that whether used in negative or positive examples women are viewed as companions, guides, or aides rather than a way of fulfilling men’s self-centered desires.

They are agents rather than objects. The epitome of this is to be found in the poem of Lemuel in chapter 31. Here we find the alphabetic and chiastic poem of the wise woman passed to Lemuel from none other than his mother!

A woman who is the anchor, charm, and source of pride for her family (31:23, 28-31). In this allegory, we do not have the objectified and weak woman of the Sumerian proverbs. We have quite an empowered image.

Here we have the ideal companion and guide created by God. The one who holds the key to the blessed life. It is through her empowerment that the family unit succeeds and man is able to find an anchor, a point of reference as he navigates through the tough decisions of life.

While the Sumerian proverbs tend to have a fatalistic view of life, they search for the meaning of life in having children; marrying well, and in self-sufficiency. Women are generally viewed either as obstacles or objects meant to fulfill men’s desires.

The Biblical proverbs, in contrast, lack that sort of fatalism. They view that a successful life is attainable through the right choices. God is generous in his gift of wisdom to those who approach him in a humble attitude.

Self-Sufficiency is not the key to success, accepting God’s sufficiency in his gift of wisdom is. Finally women are not objectified, they are empowered and viewed as guides, companions and as points of reference for successful living.

Marc Madrigal is a Pastor in the Istanbul Protestant Church Foundation in Turkey.