Around 200 people read the Bible publicly in Madrid’s Main Square, a place where “heretics”, followers of the Reformation, were condemned. 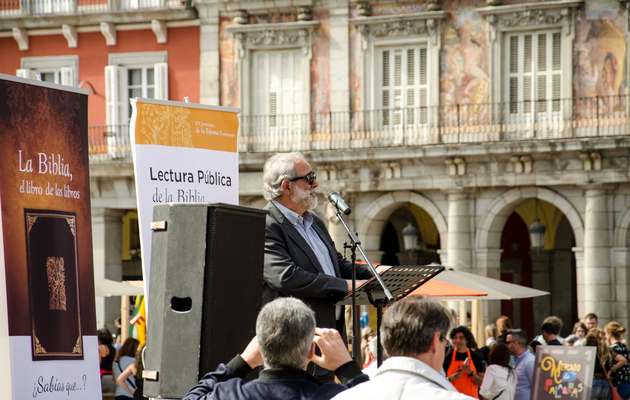 Last Sunday, April 23, Spaniards celebrated the National Book Day. Evangelical Protestants of Madrid used the opportunity to make a public reading of the Bible in the Plaza Mayor (Main Square) of the city.

The square was designed by the Spanish king Philip II and carried out by his royal successors: Philip III and Charles II. It is located next to the popular Puerta del Sol. 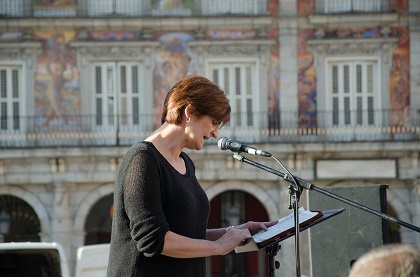 According to historians, five public trials of the Inquisition were held in the Plaza Mayor of Madrid since 1621; 162 were accused, of which 29 were sentenced to the bonfire.

Around 359 people died there for various reasons, on the gallows or in the club, until 1809.

READING THE BIBLE IN A FORMER INQUISITION SQUARE

Now, the Gospel of John was read in the same place where the "heretics", followers of the Reformation, were condemned. 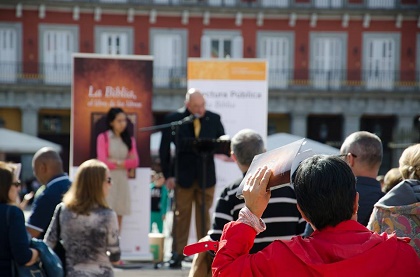 They freely read the Scriptures using a platform, a lectern and a microphone. They read the Bear Bible version, the translation of the Protestant monks Reina and Valera, who were exiled because of the Inquisition.

Men and women took turns to read the different chapters of the fourth Gospel, which filled the well-known square with the echo of its verses. 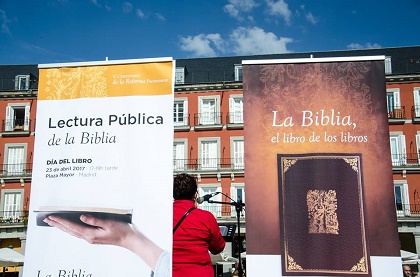 About 200 people in all were "living words" of the Book of Books during the two hours of reading.

The event was part of the activities of the 500th anniversary of the Protestant Reformation, and it was organized by the Spanish Bible Society and the Culture department of the Evangelical Council Of Madrid.

The Inquisition was created in Rome in the 13th century as a Court against the heretics and was entrusted to the Dominicans. In Spain the Inquisition began in Aragon, and the Catholic Kings established it for all the kingdoms in the 15th century. 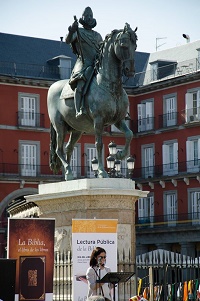 The first “Auto de fe” was celebrated in Seville on February 6, 1481. Although most of these trials were private, sometimes they were celebrated publicly.

The “Autos de fe” were not common in the court, so that the last one there, which was celebrated in 1632, was very solemn, as the work that Rizi painted in 1683 shows.

It represents what Jose del Olmo described in an official document. He was a member of the Holy Office, an agent of the Inquisition and a great master of Madrid (responsible for the buildings of the town), so he designed the construction of the theater where it took place. 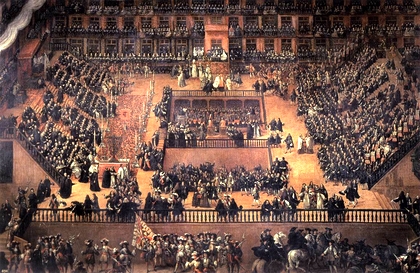 The “Auto” was held in the Plaza Mayor and lasted a whole day. Charles II, his wife Maria Luisa and his mother are in the royal stand, which is in the background. The important people of the court are in the balconies.

On the left, there is a rich carpet, and over it, there is an altar with the green cross, symbolizing the hope of forgiveness of the reconciled, and the banner of the Holy Office.

At the side, the stairs of the public offices, and the throne of the General Inquisitor, who is still next to the stand of the king, after administering an oath.

In the center of the picture, we see two prisoners dressed as in the fifteenth century, with breastplates and “sambenitos” with flames, the rapporteurs or readers of the causes and the sentences in the pulpits, and some Dominicans with the preacher in the central pulpit.

On the right, there are the stands for the Inquisition's relatives and the inmates in person or in a statue (those who are dead or have fled), which carries an inscription with their crimes and a box with their bones.

Inmates could be punished with various penalties and, by abjuring from their mistakes, they became “reconciled”, or they could be “relaxed” (condemned to death in a club, or sentenced to the bonfire if they were repeating offenders).

In the foreground we see the soldiers of faith and the asses who carried the condemned to death to the outskirts of the city, to be executed by the secular justice.

Among those soldiers, there is a male figure in the bottom center of the picture, carrying a big drum, usually used in this type of ceremonies.