“Spanish evangelicals were silenced for many years”

The Unamuno prize was awarded to journalist Jose Maria Calviño, for propelling the first evangelical program in the Spanish public broadcasting system. “I only did what was fair”, he said.

Thirty years ago, the Spanish public broadcasting system was the only television all Spaniards could see, and its religious programming was only catholic.

Jose Maria Calviño was the director of the Spanish public TV from 1982 until 1986. He understood that the confessions deeply rooted in Spain (Evangelicals, Jewish and Muslims) should also have a place to share their message and identity.

For the first time, thanks to Calviño´s negotiations, the Roman Catholic church lost the exclusivity of religious programs on the Spanish television, and the first evangelical program was broadcast: Tiempo de creer (Time to believe).

“I ONLY DID WHAT WAS FAIR”

The Spanish online evangelical news website Protestante Digital, along with the RZ Foundation for Dialogue between Faith and Culture, awarded the “Unamuno, Friend of Protestants” prize to Calviño in a ceremony that took place in Madrid on February, 11. 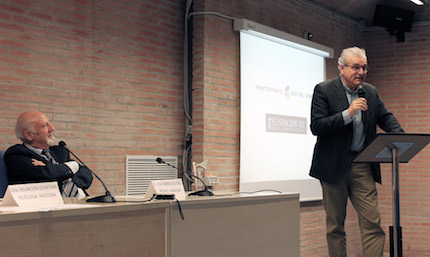 The former TV director said he “was honoured with the prize, although I only did what was fair, I do not deserve this prize.” He also affirmed that he “identifies with Unamuno, as an advocate of each person´s freedom to look for the truth wherever they think is the best place to do it.”

Calviño explained, how during his years as a University student in the sixties, Spain was living a religious transition. He added that it was then when he “could see how evangelicals had been persecuted and silenced since the years of the Inquisition until then.”

All those experiences led him to propel the freedom of conscience, which, according to Calviño, “is related to the way Protestants study the Bible”, and the freedom of religion in the Spanish public television.

“HE ASSUMED RELIGIOUS DISCRIMINATION AS HIS OWN PROBLEM”

Juan Antonio Monroy, pastor, writer and President of Protestante Digital, participated in these negotiations. He remembered that Calviño “assumes religious discrimination against evangelicals as his own problem.”

Jose Pablo Sanchez is now the director of Buenas Noticias (Good News), the evangelical program in the public network that is heir of that first program, which is now celebrating its 30th anniversary on air.

Sanchez also pointed out the importance of Calviño´s work. “Calviño took the evangelical churches out of the ghetto, propelled the creation of other evangelical TV programs, contributed to the distribution of the Bible, and started to recognise the importance of Protestants in the Spanish history.”

For the first time, the RZ Foundation for Dialogue between Faith and Culture) co-hosted the Unamuno prize.

Its president, psychiatrist and international author Pablo Martinez emphasised the importance of understanding the dialogue not as “a battlefield” but as “a crop field” because, he said, “we have too many battlefields and not enough working fields where the aim is not to win, but to convince.” 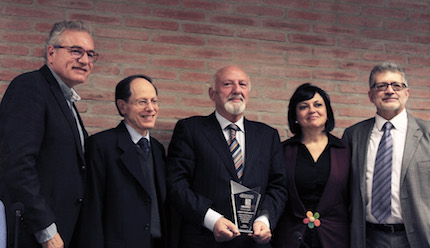 THE VISION BEHIND THE PRIZE

Asun Quintana, philologist and Women Counsellor of the Madrid Evangelical Council, explained that it was Miguel de Unamuno who, in one of his last speeches, said "You will win, but you will not convince”, referring to those who did not tolerate the freedom of conscience and religion.

Dictator Francisco Franco sentenced Coco to death because of his beliefs, and Unamuno tried to stop the execution.

That is why, in 2006, Protestante Digital created the “Unamuno, Friend of Protestants” prize, to “honour a person or an institution in Spanish society that, not being Protestant, has done something in favour of plurality and the normal coexistence between Spaniards, defending freedom of religion and evangelical culture.”

Published in: Evangelical Focus - culture - “Spanish evangelicals were silenced for many years”