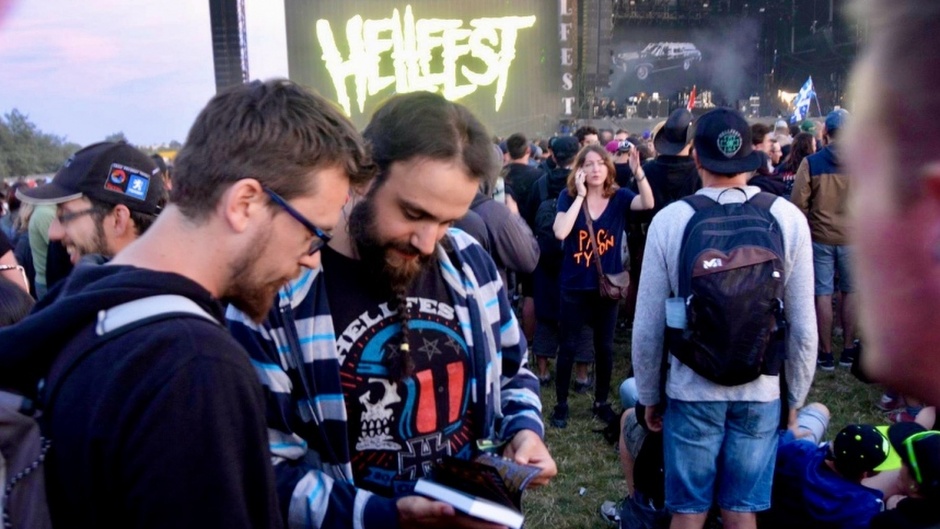 The members of ‘Metal Mission’go to the ‘Hellfest’ every year to share the gospel with the attendees. / Metal Mission via Livenet.ch.

The biggest rock and metal festival in France and one of the biggest in Europe, ‘Hellfest’, took place from June 17 to 26 in the French city of Clisson.

Its 15th edition was held over two weekends instead of the usual one week, with 7 days of concerts and parties, due to the cancellation of the last two editions because of the pandemic.

Famous bands such as Scorpions, Whitesnake, Deep Purple or Nightwish, among many others, played at the festival.

Throughout the festival, evangelists of the Christian ministry ‘Metal Mission’ approached the visitors to share their testimonies of Jesus and the gospel with them and offer them Bibles.

They gave around 1,000 Bibles during the festival. It is the ‘Metal Bible’, a work featuring the New Testament edition Sower, accompanied by testimonies of celebrities of the hard rock and the metal who are now Christians.

Prior to the ‘Hellfest’, they held a fundraising campaign to finance the purchase of those 1,000 bibles. Their initial goal of €3,850 was far exceeded.

One of the testimonies that appears in the Metal Bible is that of the singer Brian ‘Head’ Welch. The co-founder of the group “Korn”, who became a Christian in 2005 and regularly testifies of his love for Jesus. Watch the interview Evangelical Focus did with Brian 'Head' Welch in 2020.

In a photo shared by “Jeunesse pour Christ" (Youth for Christ) France on Twitter, the artist poses together with members of ‘Metal Mission’ who say they “are super grateful for all that was shared, the Bibles distributed and the meetings we had. Thanks again to everyone for your donations, prayers and support”.

‘Metal Mission’ is a group “of about 20 passionate people who work on the evangelization of unreached people, who often believe they are disqualified from the faith because of the music they listen to, but who are open to spiritual questions because those questions are part of this style of music”, says its website.

The members of this ministry go to the ‘Hellfest’ every year to share the gospel with the attendees.

They also work with local churches to provide a place to develop their faith for those who accept the gospel.