Church evicted in Belarus: “The state suppresses everything they identify as an enemy”

An interview with the pastor of New Life Church in Minsk, Vyacheslav Goncharenko: “We are praying for this nation, that we have a great revival”. Other churches and secular groups have expressed solidarity with the evangelical community. 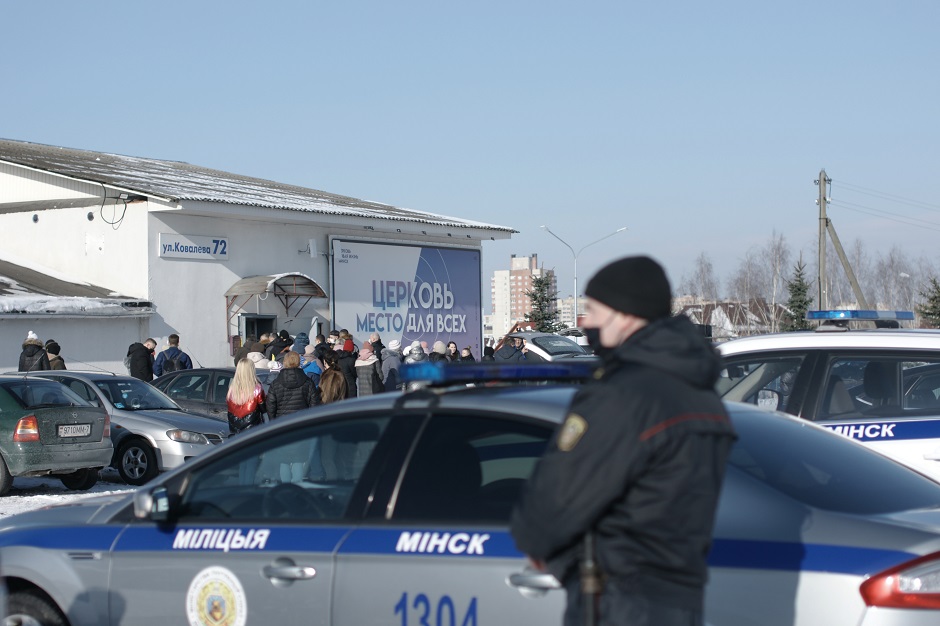 The struggle of an evangelical church which has lost its building, has put again the focus on the situation of Belarus, a country that in 2020 saw large protests for freedom and justice.

New Life Church, one of the largest local churches in capital city Minsk, lost its building on 17 February 2021 after police officers forcibly entered their premises to evict the Christian community from a land they own.

The church usually gathered over 1’000 people in three Sunday services, and they have planted a network of twenty other churches in Belarus and Azerbaijan in the last years.

Senior Pastor Vyacheslav Goncharenko Leonidovich analysed the situation in an interview with Evangelical Focus and shared his hopes to see a Christian revival in Belarus. 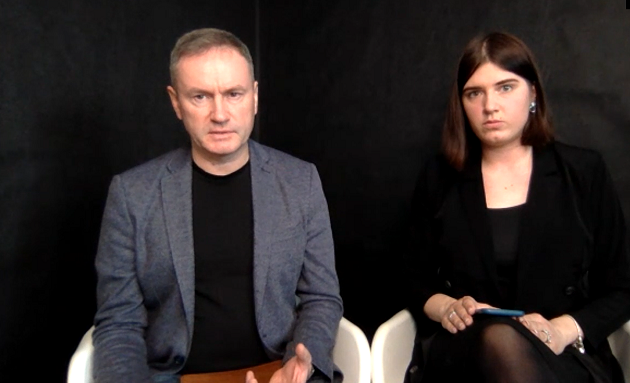 Pastor of New Life Church in Minsk, Vyacheslav Goncharenko Leonidovich (left), and translator Valerie Polivenok, during the interview with Evangelical Focus, on 24 February 2021.

Question. On 17 February, police officers and other authorities entered you church building in Minsk by force, to evict you and shut the premises down.

Answer. Yes, we were shocked because we did not expect them to do it this way. It was not the first time, but other times the people of our church stood in a chain, arm with arm, to defend the building – and after some time, officers would go away.

This time it was different, they threatened us with arrest and fines and we were powerless to defend ourselves. So, when they entered and cut the entrance with a circular saw we were shocked. I was staying there and thought, ‘is this truly happening?’

We would have expected this kind of situations in the Soviet Union times, when churches were persecuted. It might be the first case in the history of modern Belarus that we face this kind of injustice, a situation in which they entered forcefully in a church and evicted us.

Q. There were about 60 church members inside the building at that time. What were your emotions and conversations at that moment?

A. When the police entered in our building, those inside continued to pray, we had a prayer meeting going on. Since they did not stop, they [the officers] turned off the sound system. They went on the stage and said everyone had to exit the building, and of course they started to leave.

I was just outside the building, because the officers did not allow me to enter. As our church members were exiting, I saw some crying. It was a very sad situation, we were witnessing how we were losing the building we have used for 19 years.

Q. For more than a decade, you have had a legal fight in the courts with the authorities of the city. Why did they evict you?

A. The main problem is that the city of Minsk administration made the decision to take our land.

The cause is an “unpurposeful use” of the building, because it was an old cowshed when we bought it. All our efforts in this time to make this building registered for religious purpose were rejected. By not giving us the permission, they were punishing us. They did not give us an alternative place where we could gather, either.

Earlier, we used a cultural space of the city, but they threw us out, and for 4 years we were using different places. So, we bought this farm, and we tried to register with the official documents. Very tired of this struggle, we just started to have worship services there, because it is our place. And this is why the Minsk authorities have made the decision of taking the building and the land from us.

In fact, the original official purpose of the building is to farm cows, but the law says that this is an industrial zone, and it is not allowed to have cows in this area. Frankly, we are sure this issue could be solved very easily if the authorities would just be open to have a dialogue with us.

For years they have sent officers to close the case and evict us, and last week, they succeeded.

Q. In 2020, there were many protests in Belarus for more democracy and against the regime of President Lukashenko. Many said the August election was not fair, and evangelical Christians have been involved in that movement for freedom as well. As a church, you published a video supporting the protests. Do you think this is what has caused the authorities to punish you now?

A. Democratic movements in our country are saying that we are the victims in this case, that the eviction has to do as well with our political positioning, which we made public.

But I cannot say for sure that this has been the only reason that we have been evicted. Maybe, and we said this. I think it is a way of intimidating us. As a pastor I will share my opinions, and as a church we should explain our attitude and views freely.

But before, we were also persecuted in this way. Then we had not said anything about politics. In our history as a church, we have had some very tough moments. There are many now in our country that are oppressed and feel powerless, this might be perhaps the reason that the authorities think now was the best time to take what they wanted away from us.

Q. In this situation, have you received the support of other citizens in Minsk and of other churches?

A. As our case has been highlighted in the mass media, many have heard about the church. And we have seen a really huge support. The pastors of many churches have supported us, as well as believers and also non-believers. Many are seeing that the power of the State suppresses everything that they identify as an enemy.

We are very grateful for the support of many.

Q. On your social media you have shared images of meetings outdoors, in the snow, with prayer and worship. What are the plans of the church life in the next few weeks?

A. Since we do not have the main building, we are having services just outside. Actually, we were surprised that they allowed us to be there, since now in our country any meeting without the permission of the State is considered to be illegal. But we went just to pray.

We are a registered church. We do a lot of social work and everyone knows that. There were even times that the authorities thought of joining us for social projects because they were successful.

So, we gathered outside the church building, and we plan to continue to do so, because we believe something will change.

And of course, we are also doing home services, and it could be as well that some of the other churches will open their doors for us. We are grateful for any kind of support. For instance, yesterday a church opened their doors for us to have a leader’s meeting in their premises.

We believe that God will give us victory in these difficult times. 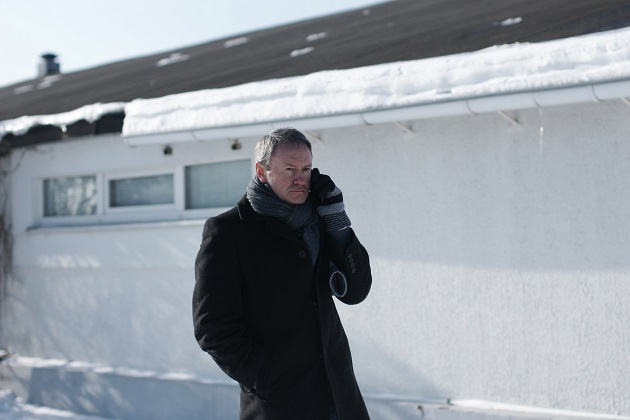 Vyacheslav Goncharenko Leonidovich, outside the church building, the day of the eviction.  / NLC

Q. As a church, how do you pray for this situation?

Answer. We are praying that God gives us a spirit of victory so that we can go ahead. We ask God to say His word to us, on how we should pray. We also pray that we can go back to this building, since we feel that it belongs to us.

But we are also praying for the future. Actually, this building could not be enough for us soon – we are thinking of a new building. When a church does not have its building, many questions arise, such as: were to meet during the week, all the activities. Even to do this interview, we asked one of our brothers to lend us this space. And now all the staff are working from different parts. We feel everything is a bit of a chaos now, mixed up, and we would like to find some order.

But we also pray that God gives us the discernment to know how to fulfil our purpose to share the gospel and reach our country with the good news.

In 1992, I heard the voice of God saying there was a purpose of bringing people to Him in numbers of a half a million people. Since then, we think, according to our church’s statistics, that we have reached with the message of the gospel about one million people. We have planted the seeds of the gospel, and now we are expecting a huge harvest, to gather the fruits. We are asking other people as well to pray for this.

Q. How can Christians in other places of the world pray for Belarus?

A. Since 2020, we feel we are standing in this moment right before a revival. We see that our nation does no longer want to deal with this evidence of evil, lies. We as a population are ready to resist this. People want to separate themselves from this evil and have a desire to become pure. And this is not only that people want to get rid of the government, but many, including non-Christians, are striving for kindness and fairness. This is really evident in our country now.

So we ask you to pray for our country an all these good starts in the hearts of people. May God bless these beginnings. Pray that hearts of people turn to God, and find their only hope in Him, and have a supernatural encounter with Him. We are praying for this nation, that we have a great revival.

Watch the video of this interview:

Published in: Evangelical Focus - europe - Church evicted in Belarus: “The state suppresses everything they identify as an enemy”