Thousands joined “March for Life” in Germany and Switzerland

Christians from diverse backgrounds, local churches and several organisations gathered on September 17th in the main cities of Germany and Switzerland to celebrate the annual “March for Life”.

The aim was to publicly express their support for laws and initiatives which protect the life of unborn human beings. They also expressed their concerns about intiatives which promote euthanasia.

In Berlin, the organisation spoke of a “record attendance” of 7,500 people, who walked through the city in a silent march. The event ended with a worship service in which the “eternal value God gives to of every human being” was reminded to all attendants.

A good life should be guaranteed for every baby both before and after birth, speakers said.

100,000 unborn human beings are aborted in Germany every year.

The German Evangelical Alliance was among the supporters of the march.

More than 1,000 police officers protected the gathering. Several pro-abortion groups had called to organise counter-demonstrations, boycott the march, infiltrating the gathering and boo at the attendtants.

According to news agency Idea, the noise and loud music of these radicals altered the worship service that closed the event. Some political parties had publicly supported these disruptions. 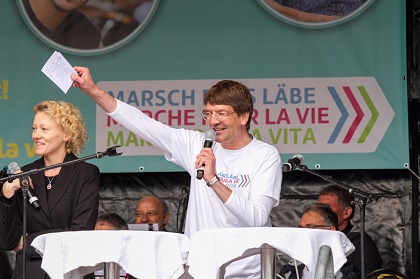 In Switzerland, the gathering (see photos) brought together about 1,700 Christians. In Bern, the authorities had authorised the meeting in front of the Swiss parliament, at the Bundesplatz square.

The three main Swiss languages (German, French, Italian) were used to communicate the need to protect human life in a country in which “new steps are done to erode the right to live of human beings”.

Attendants prayed to God for forgiveness, and live music an several messages of Christian leaders and politicians closed the event. 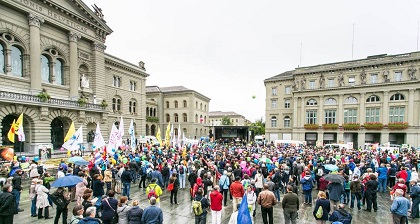 About 100 radicals tried to boycott the event in Bern, playing loud music and shouting slogans. Condoms were thrown at the participants of the event and a smoke flare was used. A strong police cordon prevented the group from reaching the area where the Christian event was happening.

In the weeks pior the Swiss march, buildings of Christian organisations like the Evangelical People’s Party (EVP) and evangelical church ICF were attacked with paint. The night before the march, the home garage of the President of the Swiss Evangelical Alliance -who attended the meeting- was smeared. 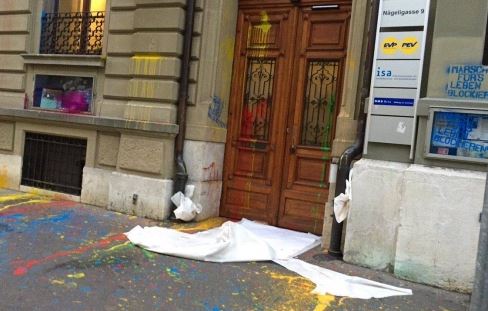