EEA: “What happened in Lund paves the way for all Protestant churches and confessions”

The European Evangelical Alliance publishes a press release: “When a Pope understands Luther better than many Protestants do”. 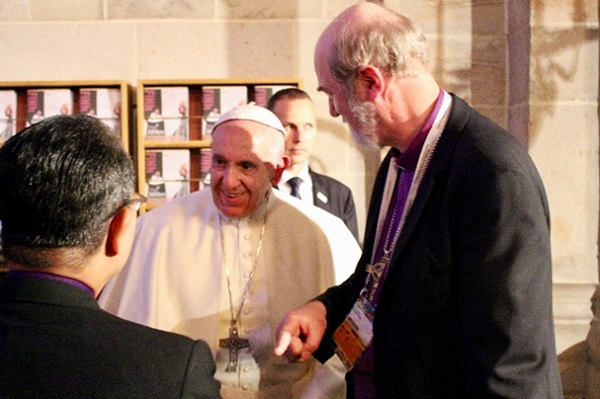 One week ago, Lutherans and Roman Catholics held the Joint Ecumenical Commemoration of the Protestant Reformation in Lund (Sweden). The participation of Pope Francis originated to diverse opinions in Protestant and evangelical circles.

Representatives of the World Evangelical Alliance (WEA) and the European Evangelial Alliance (EEA) were invited and attended the events in Lund. Among them were WEA’s Secretary General Efraim Tendero as well as the EEA and WEA Theological Commission Chairman Thomas Schirrmacher.

“The Lund event can be seen as part of a process of peace making within global Christianity”, the EEA press release says. “One could argue that, in a sense, Catholics and Lutherans signed a peace treaty. They regret having used armies, secular powers, and disinformation to fight each other, and they now want to deal with their differences through peaceful discussion, no longer using non-spiritual weapons.”

The EEA summarises some of the key ideas of the Lutheran-Catholic commemoration and mentions the joint statement signed at the Ecumenical Prayer in Lund in which the parts “confess and lament before Christ that Lutherans and Catholics have wounded the visible unity of the Church. Theological differences were accompanied by prejudice and conflicts, and religion was instrumentalized (exploited) for political ends.”

Martin Luther’s concern for the “sola gratia along with his call for reform, were acknowledged as ground breaking by all participants”, the EEA says.

‘NO SECRET AGENDA OF POPE FRANCIS’

“The so called sell-out of the Reformation, which has been announced by all sorts of critics and conspiracy theorists, has simply not taken place”, writes EEA's Schirrmacher.

“Since the preparation of the event in Lund was of the utmost importance to the World Evangelical Alliance as well as to many other people, I not only talked with the leaders of the Lutheran World Federation very extensively, but also met with the Pope four times in recent weeks”.

“With that said, I would like to point out that I cannot understand how some voices claim that the Pope does not mean what he says and that he, as a Jesuit, is pursuing a secret agenda, completely different from what he says in public. Pope Francis is deeply convinced that the Holy Scripture, the Gospel, and the Holy Spirit possess the required power to lead the churches to a greater unity in the long term, and to enable each Christian to personally witness about salvation and hope in Jesus Christ to a dying world.”

The EEA press says: “The fundamental recognition of Luther's basic concerns by the Catholic Church is no cause for Protestant triumphalism. It must be borne in mind that the Reformation led quickly to further divisions, to polarization, to religious nationalism, as well as to the spread of pride and hatred.

And adds: “Just in time, the pope tears down 500-year-old walls and replaces conflict by serious talks, self-criticism on both sides, and by the desire that the necessary disputes within Christianity should be shaped by love, not by the desire to defeat each other.”

ON THE THEOLOGICAL DIFFERENCES

“Instead, these differences would have to be thoroughly discussed, although the similarities certainly predominate. In this sense, he called World Christianity to show solidarity to a suffering world, and together help the poor, the sick, the oppressed, and the persecuted.”

The EEA concludes by saying: “The signing of a cooperation agreement between Caritas International and the World Service of the Lutheran World Federation, makes clear that theological differences should not be discussed at the expense of the needy, but as a common struggle for truth”.

Published in: Evangelical Focus - europe - EEA: “What happened in Lund paves the way for all Protestant churches and confessions”