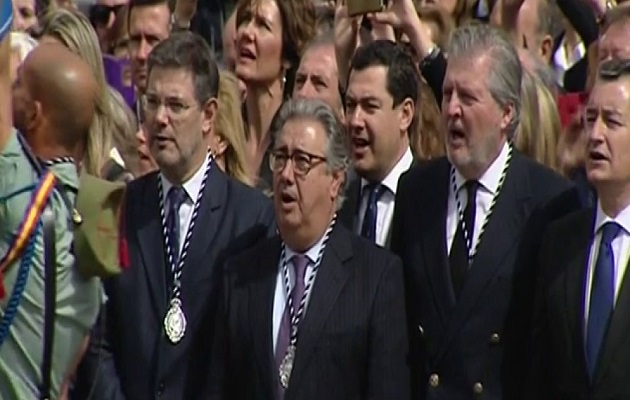 The Spanish Federation of Evangelical Entities  (FEREDE) has published a statement criticising the participation of public authorities and representatives of the army and the state's security forces in some of the Catholic ceremonies celebrated during Easter.

The Federation that legally represents evangelicals in front of the State denounces that the presence in some Catholic processions of the ministers of Justice, Defense, Education and Interior, “not only damages the non-confessional status of Spain, but also violates the norms of democratic coexistence”.

FEREDE appeals to the prudence that should characterise the expression of public devotion of anyone who holds public office.

The Spanish Evangelical Alliance (AEE) also asks the authorities for caution when they participate in ceremonies related to one specific confession.

“If the ministers attend the central acts of the Catholic liturgical year, they should establish a program of similar assistance to all the central celebrations of the different religious communities”, the General Secretary of the AEE, Jaume Llenas, says.

It would be better that public authorities chose to attende cultural events organised by the faith groups, such as conferences, rather than worship services.

The FEREDE also reference to the participation of the military in Catholic acts, a long tradition in Spain.

“The relation between the Catholic church and the the Armed Forces - uniforms, hymns, symbols and flags, belong to and represent all Spaniards - is offensive because it discriminates millions of citizens who profess other religious beliefs, negatively affecting the coexistence and union of all Spaniards”, a document states.

The fact that such Catholic ceremonies are granted a military status means that attendance is mandatory.

In its statement, FEREDE warns about a “regrettable setback to confessional and identity positions typical of other times", referring to Francisco Franco’s dictatorship.

“With this type of gestures, repeated again and again, far from advancing in the Church-State separation, Spain seems to walk in the opposite direction”, it adds.

The federation insists to establish “a clear, precise protocol, that regulates the participation of public officers and representatives of State institutions in any religious act, and that is not open to particular interpretations”.

Meanwhile, the Evagelical Alliance links the closeness between public authorities and religious institutions to the historical hegemony of the Catholic culture in some European states, including Spain.

“In Spain there is still a lot of work to be done. Starting with our Constitution, which continues to mention the majoritarian religion, to the decisions of many authorities who continue to name virgins as perpetual Mayors”.

According to the AEE, these practices “affect the equality among citizens, and some receive priority attention over others. It seems that religious normalisation is still far away. We deal with two extremes, the remains of a confessional state, and an exclusive laicism”, Jaume Llenas points out.

“We ask the state to respect them in the same way, giving them a neutral, equal and non-privileged treatment, which is the greatest form of respect that a democratic state can offer to citizens of any religious denomination”, the Ferede says in this regard.

EVANGELICALS SHOULD ASK FOR A “NON-CONFESSIONAL STATE”

The AEE says evangelical communities in Spain should work towards a total independence of faith confessions. “When we want the same thing they [Catholic institutions] want, we forget that we have not been sent to parasitise the State, but to free it from the ties it has to various types of powers that restrict its independence”, Llenas says.

“We must work for a model of a non-confessional state, which does not finance the different confessions with public money”, the AEE Secretary General concludes.