The beauty of God’s air under our wings

The European Disability Network (EDN) coordinated a series of workshops in Tallinn about how the Christian community can and should take into account people with disabilities. 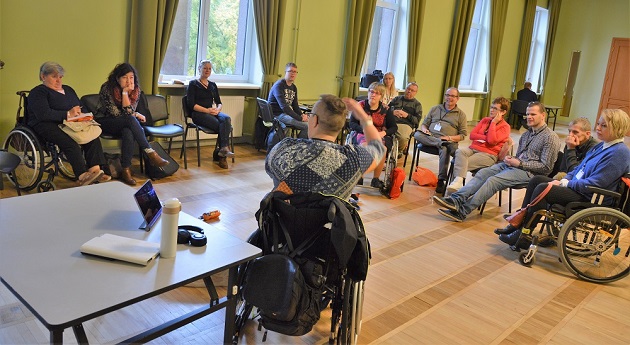 The track about the topic of disability, at the Hope for Europe conference in Tallinn. / Jordi Torrents

“Dreams take me to a place where every detail is perfect”. These words are the first four verses of the poem Air under the wings written by Hildegunn Gronvold-Rossland.

Hildegunn is an energetic Norwegian. She gives thanks to God for each new day. She became a Christians when she was twelve years old and now she is always accompanied by a beautiful dog named Connie. Twenty years ago she was diagnosed with a strange syndrome (Ehler Danlos) and began to live with the pain, with surgeries and with the disability.

Hildegunn was one of the participants this week (from 8 to 13 October) at the Hope for Europe conference organized by the Evangelical Europe Alliance (EEA) in Tallinn, Estonia. 370 representatives from 37 countries under the slogan United in diversity. United in a transversality that is specified in 17 thematic networks; one of which represents, perhaps, one of the greatest expressions of diversity, which refers to the topic of disability. 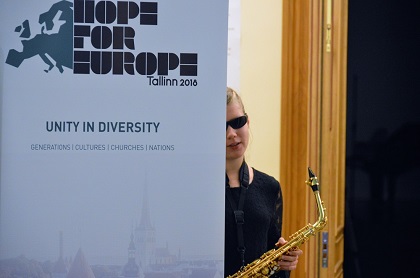 The network, coordinated by the European Disability Network (EDN), had workshops and presentations on the different types of disability (physical, sensory and intellectual) and our role as Christians. One of the main aims was to strengthen bridges and networks and be partners with the same vision of the Kingdom of God.

Therese Swinters: “We need to be more visible”

Therese Swinters, facilitator of the EDN network and responsible for the Belgian NGO Gemeenten in Gehandicapten (Church and Disability), explained that people with disabilities “need to be more visible”. Referring to the networks about disability, she said that “the most desirable would be that they should not have to exist, but we still need this kind of work to give support and to know each other”. She considers that information and awareness in the churches is needed and explains the example of a blind person who wanted to be an elder in his church: “But you cannot, you are blind”, was the answer he received.

Swinters reminds that it is estimated that between 10% and 15% of the population have a disability, and that churches should be the first to be open, inclusive and able to take into account the skills of each one.

Baiba Baikovsa: “Disability is not part of the person”

Baikovska (from Latvia) has been collaborating with Swinters in the coordination of EDN for some months now. She remembers how, when she was a year and a half old and became ill, the doctors told her parents to “leave me in the hospital, that it was not worth it to take me to school, but my parents were brave”. She studied at the University of Riga, where someone spoke her about God and his ability to love unconditionally. “I understood that God loves me as a person”. Baiba’s disability is considered a visible one, but she explains that there are invisible disabilities, often “chronic diseases that hinder daily activities at work, in school and in social life”.

Baikovska explains that “disability is not part of the person, it is part of how we can develop and manage in society”. When invisible disabilities are addressed, “there is fear of being stigmatized”.

On this subject, the head of the Reachglobal ministry, Jim Baker, points out that “the key must go through the fact of feeling welcome in the churches, whatever our reality may be”.

Courage to be: “Show our abilities”

As a complement to the workshops, in Tallinn it was also possible to see the exhibition of paintings Courage to be done by Estonian and Latvian artists, most of them with a disability. They wanted to “show our capabilities” and remind us that there are still people with disabilities “with the stigma of not being able to be independent or even to love”.

One of the works, for example, showed the silhouette of the body of a woman fleeing, but with wounds that seem to chase her. Its author, Lauma Palmbaha, explained that it represents “the suffering of a woman”, but also “the gratitude to God for the joy of living”. Another painting, done by Tiia Järvpöld, shows herself with her wheelchair: “It is difficult for us to be happy as women when we have special needs, but I think that a woman in a wheelchair can also show her femininity”.

One responsible of the exhibition tells that Gauguin once told Van Gogh that he was painting too fast, but the Dutch genius replied: “No, what really happens is that you look too fast”. Then, “we must look more calmly too, seeing how the beauty of God is expressed through other hands and other capacities”.

Hildegunn shared about the needs of deaf people. She herself does not hear anything in one ear, while she has social deafness in the other (when someone is able to hear but with the problem of confusing words).

How can we work in churches to include people with hearing disabilities? Hildegunn details options such as a system of arcs to amplify sounds or have someone to translate into sign language. Two options, however, not always within the reach of the churches, so she also proposes to “deliver the content of the preaching or the songs printed and, when speaking, using short and clear ideas, look people in the face and talk more slowly”. This would be helpful not only for deaf people, but also for older people (or even not so elderly) who may have hearing problems. 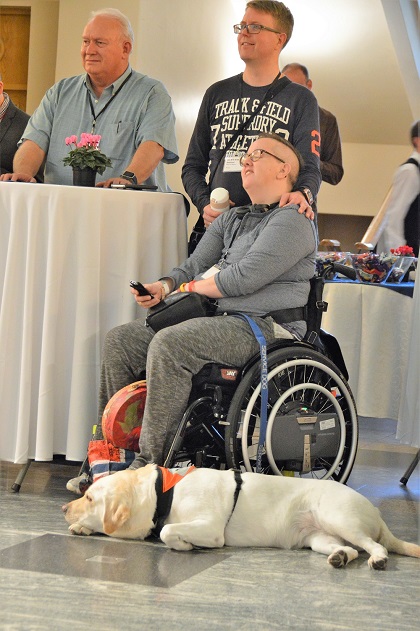 In the same category of sensory disabilities, Vera Suberte (from Wings for Wheels in Latvia) explained that there is also a need to work on the inclusion of people with visual disabilities in the churches because they use to feel isolated.

Martina Köninger: “Having a disability is not a sin”

Another person who participated in the Tallinn EDS network ws Martina Köninger (from the disability forum of the German Evangelical Alliance). Therese Swinters, in her name, tells that Martina had two twin sons. One of them, with a hearing disability due to a neurological problem. According to Martina, there is a clear message for both churches and governments: “Being different is not a problem. And if it is, we must find solutions”.

She has a direct message to some churches: “Having a disability is not the result of any sin”. As a more direct example of that, there is the story of the blind man and Jesus, who talks to him asking what he can do for him. Martina considers that “Jesus says that we are all imperfect, so we do not always have to pray for healing when we meet a person with a disability. If we pray for someone it is to honor God”. When other people work with deaf people, they must not forget that “the Gospel is the real language of the heart”.

Martina reminds everyone that there are 275 million deaf people in the world and that 5 million are totally deaf, “one of the least reached population groups by the Gospel”. 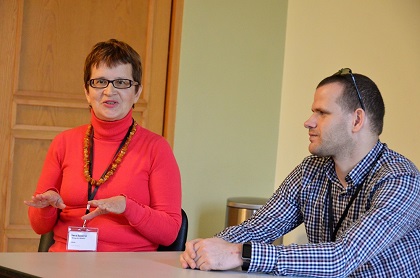 Normunds Zarins: “The church must be our inclusive community”

Normunds is Latvian, lives in Sweden and is a specialist in stress treatment through different therapies. His reflection is based on the idea that “we are all different, we all have special needs and we must flee from labels”. So, “our attitude is key to deal with people with disabilities, because for us to explain to others which needs we have can cause feelings of sadness and frustration”. 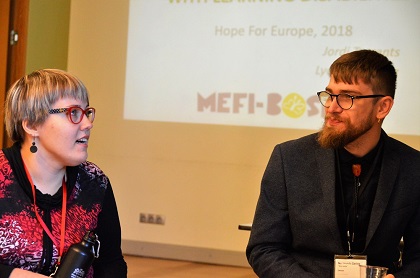 He recommends not only speaking clearly, but also learning to be together and remember that “where I am, there is Christ. And to testify about Him is to be there. And this includes being with people with intellectual disabilities”. He remembers that when he was born Latvia was part of the Soviet Union “with an excluding society, with few opportunities for families” and explains that, from his own experience, in small societies “it is easier to feel included”. “The church must be our inclusive community, able of making us strong and developing our faith”.

Lydia González, social worker, coordinates in Terrassa and Barcelona the Mefi-Boset ministry, which works with adults with intellectual disabilities.

Her reflection confirms the need to work with people with intellectual disabilities from the churches because “they do not usually have access to the Gospel”. To facilitate this inclusion we can start with support and physical adaptations, in the language or just in the understanding about their presence in a normalized way. “If we do not adapt to the needs of people, we cannot communicate. If someone with a wheelchair cannot enter, maybe we should preach outside. If a deaf person cannot hear us, maybe we should use sign language. If a person does not understand preaching because it is too dense, maybe we should simplify it”.

Thinking especially of adults with intellectual disabilities, it is important to work with their families (usually old parents), with a big financial pressure and often isolated by incomprehension or prejudices.

“If people with disabilities are not part of the churches, we will have a church with a disability. Without these people the church loses the opportunity to count on all the members of the body that reminds us the Bible and loses its abilities and its gifts”, Lydia said. What can we do? “Let's be accessible, be friendly with families and offer support without judgment or without being upset by people who can move or make noise”.

This is how Hildegunn’s poem ends:

“But I do need to see that

in my will, my faith and my longing,

and even my little progress

lies the force that gives air under my wings.

Published in: Evangelical Focus - europe - The beauty of God’s air under our wings