First ever coalition government in Spain 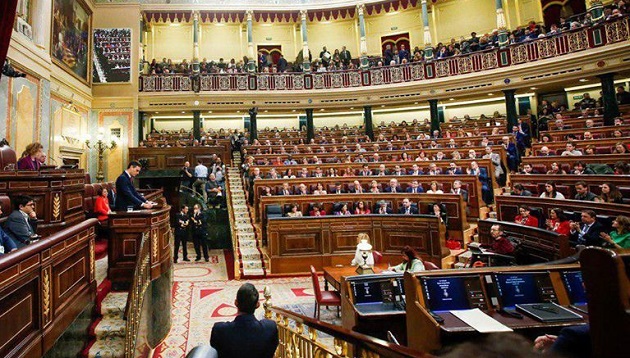 “Terrorists”, “fascists”, and other insults were heard during the three days of debate in the Spanish Parliament in Madrid before a vote that gave Social Democrat Pedro Sánchez a new mandate as Prime Minister.

His Social Democrat party PSOE and the young leftist party Podemos will share a government after an election in November that showed the big division between three blocs. The right, the left and the pro-independence and regionalist parties (not only in Catalonia, but also in the Basque country and other regions) have radicalised their discourses in the last months.

Shouts, chants and disqualifications marred an investiture session that became the most heated in decades. Issues like extinct terrorist group ETA, the Civil War, and the role of King Felipe VI came into the centre of the debate with a degree of hostility that was mirrored by social media users. The rising far-right party Vox, the third group in the Spanish parliament, has been key in the increasing polarisation of the socio-political context.

Much of the attention fell on the main pro-Catalan independence party ERC and nationalist Basque parties PNV and EH Bildu, all of which finally helped the new government achieve a narrow win to start the term: 167 in favour, 165 against and 18 abstentions.

The new government plans to increase taxes on the wealthiest and strengthen the health system and other areas that have experienced severe cuts in the crisis years. Pedro Sánchez also vowed to pass a climate crisis law, and regulating the housing market.

In the last years, evangelical Christians have called to work for reconciliation and dialogue between regions, the end of corruption, equality for all faith groups. They have also defended the dignity of life and expressed their rejection to gender ideology in schools.

Christians mostly oppose the new euthanasia law promised by the new government, as well as the plans to pass an ambitious pro-LGBTI law – a proposed legislation that has been criticised by the Spanish Evangelical Alliance for threatening freedom of speech and religious freedom.

The agreement of the Social Democrats and the Leftists also includes that religion subject will lose weight in state schools.

Spain is a non-confessional state, but it has not yet put an end to the ‘Concordat’ signed by the Franco dictatorship with the Vatican in 1953, which gives Roman Catholic church special privileges, including tax money.

Prime Minister Pedro Sánchez defines himself as an atheist in a country that traditionally has been Catholic.

Evangelical Christians are the fastest-growing faith minority, but most young people define themselves as non-believers.