Catholics, Anglicans, Jews, Muslims and Hindus presented a joint manifesto against the euthanasia law that could be passed by the Spanish Parliament in the next few weeks. 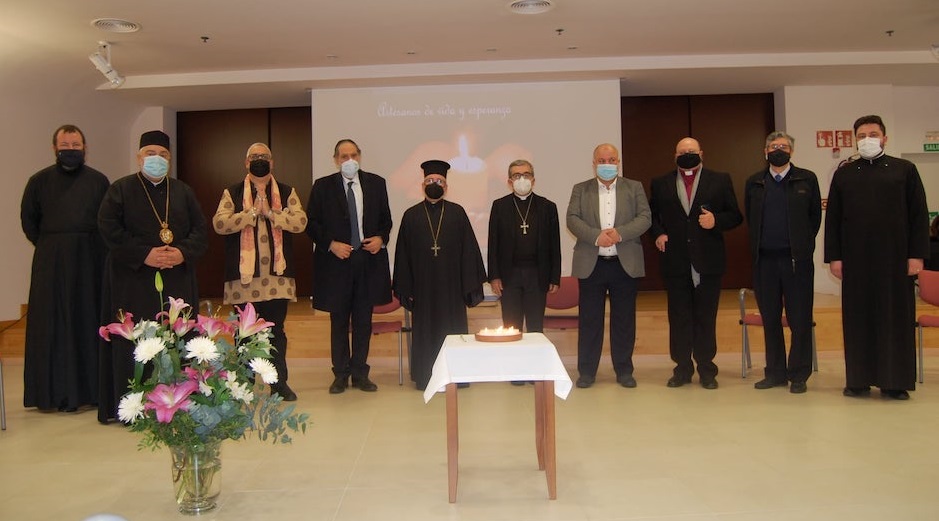 The religious leaders that signed the manifesto against euthanasia in Spain, December 2020. / ReligiónEnLibertad

Representatives of six religious groups in Spain presented a joint manifesto against the euthanasia law that could be approved in the national Parliament in the next few weeks.

The document, entitled “Artisans of life and hope”, has been signed by the Spanish Roman Catholic Church, the Episcopal Reformed Church of Spain (Anglican Communion), three Orthodox Church branches, the Islamic Commission of Spain, the Hindu Federation and the Rabbinic Council of Spain.

The text sees the draft law (which has the support of a political majority) as an “attack against life” and proposes to strengthen palliative care instead of opening the door to assisted suicide.

“We ask our authorities to edify a society based in the inviolable value of the dignity and the human life, and we reject laws that attack them. Today we are especially concerned about the processing of the euthanasia law. We defend an adequate legislation”, the religious representatives say.

The manifesto was presented on 11 December, in an inter-religious dialogue event organised by the Roman Catholic Church. The Anglican representative, Bishop Carlos López, underlined the need to “care for one another and respect life”. The Orthodox representative Demetrio underlined “the human body does not belong to the State”, while the President of the Hindu Federation, Juan Carlos Ramchandani pointed out that the issue was of enough urgency to “leave theological differences aside”.

The manifesto says these faith communities are “open to dialogue” and ask politicians to “make sure” that all views of the citizens on the issue of end of life are included, “so that together we all enrich each other”.

The law to legalise euthanasia could be passed by the Spanish Congress of Deputies very soon, after the draft law presented by the leftist government was debated in September and the amendments of the conservative opposition parties were rejected by the majority.

Evangelicals: Dangers of seeing patients as a “burden”

The Spanish Evangelical Alliance, which did not participate in the gathering, had already explained its position on this draft law in March, calling to develop palliative care, among other measures.

“The number of patients who consider euthanasia as an option diminishes drastically if the alleviation of pain is facilitated, and human accompaniment and resources to combat hopelessness is offered”, they said.

The evangelical body also warned about the danger of spreading certain ideas about death in the political sphere. “It is dangerous to build and social opinion that says that terminal patients are a burden”.

The Bioethics Commission of Spain, an independent official body of experts linked to the government’s Health Ministry, also published a document that was very critical with the terms of the proposed law.

“There are solid reasons in the area of healthcare, ethics, law, as well in the socio-economic area, to reject the transformation of euthanasia into a subjective right and a public service”.

This advisory group recommends to implement palliative sedation for the patients suffering great suffering, instead of applying euthanasia.

“Legalising assisted dying means opening a path towards the reduction of the value of the protection of human life. This path could lead to has frontiers that are very difficult to predict, as the experience in our context [Europe] is showing”.