A Pew Research survey shows that 47% of religiously unaffiliated adults have experienced any form of online harassment. It happens most among those under the age of 30.

A recent study from the Pew Research Center, found that United States white evangelicals are the religious group most targeted and harassed online due to their religious views.

This new survey is an appendix of an earlier report which analysed the state of online harassment in the United States as a whole, and showed that 41% of adults have been harassed online.

Of those who said they faced online abuse, “19% believe they were targeted because of their religion. When looking at Americans overall, not just those who have been harassed online, that share is equivalent to 8% of the overall population”, Pew points out.

23% of Protestants harassed because of religion

Among them, “23% of Protestants as a whole say they believe they were the target of online harassment because of their religion, compared with 15% of Catholics and one-in-ten of those who are religiously unaffiliated”.

Regarding Protestants, the survey found that “white evangelical  online harassment targets (29%) are more likely than white non-evangelical targets (11%) to say they believe they were harassed online because of their religion”.

They also explain that “there are not enough respondents in the survey’s sample who are Black, Hispanic or Asian – or who are part of specific religious groups – to be broken out in a separate analysis for this question”.

Furthermore, “there are also differences among those who describe themselves as having no religious affiliation. For instance, 21% of atheists who have been harassed say they were targeted with abuse online as a result of their religious views, compared with smaller shares of targets who are agnostic (6%) or nothing in particular (8%)”, the survey underlines. 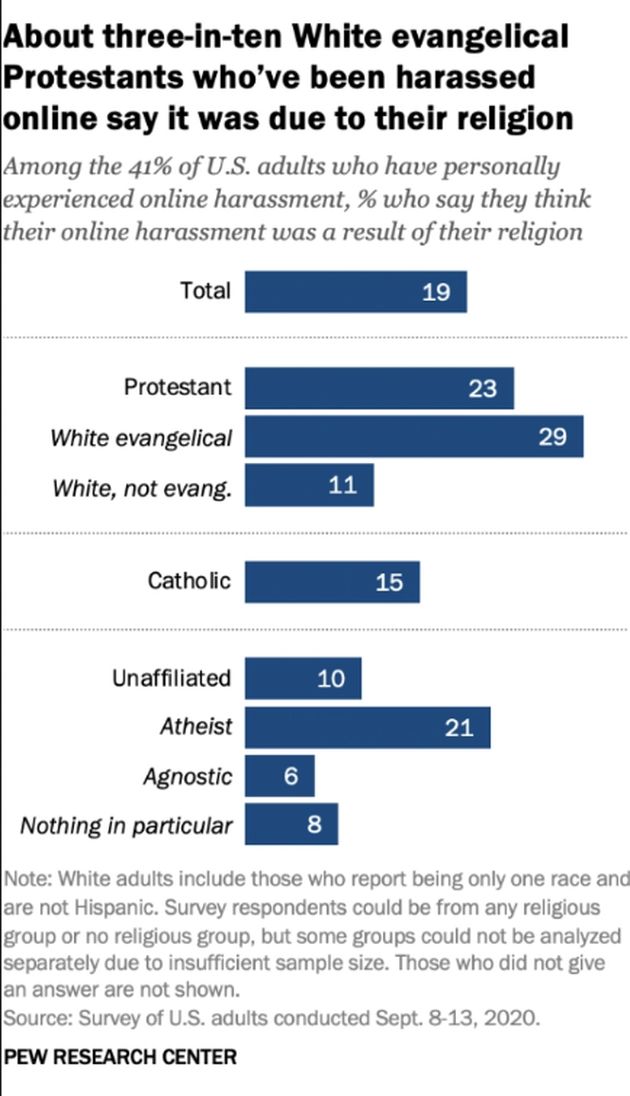 19% of the US adults surveyed believe they were targeted because of their religion, / Pew Research.

Broken down by sex, race and political views, the research points out that 21% of men and and 16% of women claim to have experienced harassment on the internet due to their faith, while 18% of whites said the same, along with 16% of blacks and 21% of Hispanics.

Furthermore, “white Republican targets are more likely to cite religion as the reason they believe they were targeted compared with White Democratic targets (21% vs. 14%)”.

As well as asking about religion as a possible reason for harassment, the survey asked about four other possible reasons: political views, gender, racial or ethnic background and sexual orientation.

“Political views are the top reason cited for why people think they had experienced abuse. There are no differences among Protestant, Catholic and religiously unaffiliated online harassment targets when it comes to saying they were harassed online because of their political views”, the authors of the survey says.

In the study adults were asked if they had experienced any of the following abusive behaviours online: physical threats, stalking, sustained harassment, sexual harassment, offensive name-calling or purposeful embarrassment. 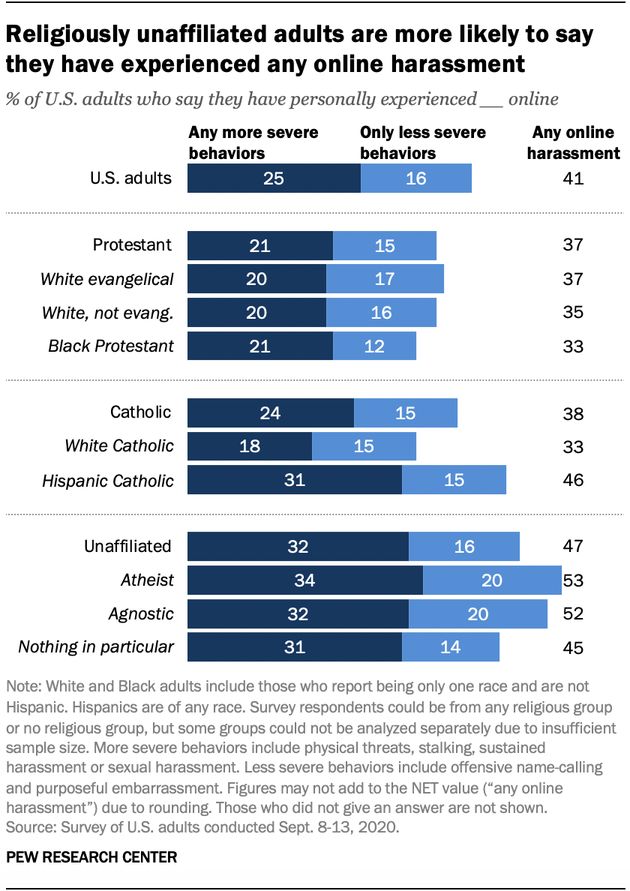 “Even though those who are religiously unaffiliated are less likely to cite religion as a catalyst for their harassment online, larger shares of this group are likely to say they have experienced online harassment of some kind”, the survey says.

It shows that 47% of adults who have no religious affiliation confirmed they have experienced any form of online harassment, with 53% of atheists and 52% of agnostics. By contrast, only 37% Protestants and 38% Catholics say the same.

Furthermore, “Hispanic adults who are Catholic are also particularly likely (46%) to have experienced these forms of harassment online”,the authors of the study add.

According to Pew, “much of this can be explained by the fact that younger Americans are more likely to be religiously unaffiliated and online harassment is more common among adults under the age of 30”.

Published in: Evangelical Focus - life & tech - US evangelicals say their faith was the main reason for being harassed online