US evangelicals divided by ethnicity in their voting intention

“Trump’s advantage comes from white evangelicals (73% to 18%), while African Americans evangelicals plan to vote for Biden (69% to 19%)”, a LifeWay Research survey says.

An image of the first US 2020 presidential debate. / Facebook NPR

According to a new survey from LifeWay Research conducted Sept. 9-23, “61% of US American evangelicals by belief plan to vote for Trump and 29% for Biden. Other candidates garner around 2% combined, and 8% are undecided”.

Among the evangelicals surveyed, President Trump’s advantage comes primarily from white evangelicals (73% to 18%). African Americans evangelicals overwhelmingly plan to vote for Biden (69% to 19%).

Among American evangelicals of other ethnicities, Trump has a 58% to 32% lead”.

“Different ethnic groups are more attuned to specific failures of our country and of specific candidates. One’s ethnicity and political party are more powerful in predicting the vote of someone with evangelical beliefs than their shared religious convictions alone”, Scott McConnell, executive director of LifeWay Research explained.

The survey points out that “improving the economy (72%) and fighting to slow the spread of the pandemic (58%) are the top characteristics registered voters say they are looking for in a presidential candidate”.

Maintaining national security (55%), addressing racial injustice (49%), personal character (48%) and the candidate’s position on immigration (48%), are the next most important factors in deciding their vote.

After all these issues, the survey, “which began prior to Supreme Court Justice Ruth Bader Ginsburg’s death”, shows that “a third (33%) say likely Supreme Court nominees are an important factor, as well as the candidate’s ability to protect religious freedom (32%), their position on abortion (31%) and their position on the size and role of government (30%)”. 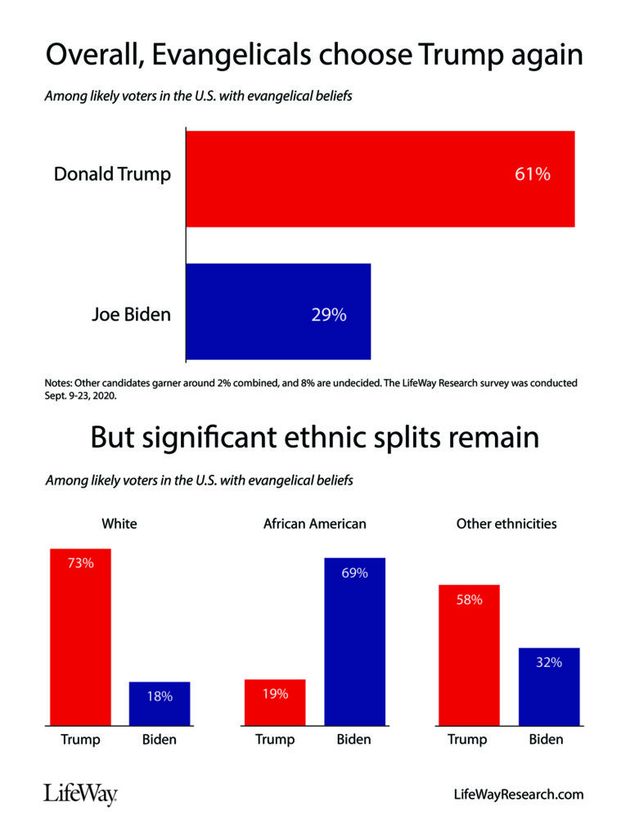 Survey on US evangelicals vote in the upcoming 2020 presidential election. / LifeWay Research.

On the other hand, “Biden voters are more likely than Trump voters to point to Covid-19 (75%), racial injustice (68%) and personal character (66%)", the survey reveals.

Religious freedom and abortion, deciding factors for the evangelical vote

Regarding evangelicals, “most are not single-issue voters. Eighty-nine percent of those with evangelical beliefs selected more than one important issue that is influencing their vote”, McConnell pointed out.

“Like other Americans, their top concerns reflect the current recession and pandemic, but more than 1 in 10 with evangelical beliefs will vote for the candidate they think will protect their religious freedom”, he underlined.

That is why “improving the economy (22%) and slowing COVID-19 (16%) remain the top issues, but the candidates’ position on abortion (11%), and ability to protect religious freedom (11%) are more at the top than for those without evangelical beliefs”.

However, “fewer evangelicals (8%) than other Americans (16%) say the personal character of the presidential candidate is the most important issue in deciding their vote”.

Published in: Evangelical Focus - world - US evangelicals divided by ethnicity in their voting intention