The Golden State Warriors basketball player became the all-time leader in 3-pointers (2,974). In the decisive game in New York, he was wearing a “In Jesus’ Name I play” wristband. 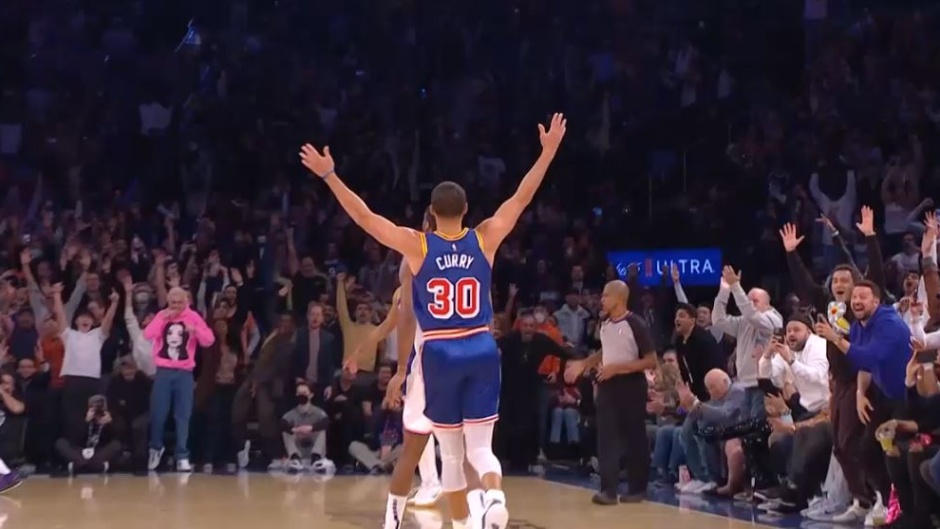 “Stephen Curry… The all-time three-point King in the NBA”, wrote the official account of the United States basketball league on 14 December as the point guard clutched his 3-pointer number 2,974.

The Golden State Warriors were playing against the New York Knicks in the legendary Madison Square Garden, and already in the first quarter of the game (a NBA game has four 12-minutes quarters) he surpassed the former record holder, Ray Allen, who travelled to New York to watch the match live.

In the post-match press conference, Curry commented: “Once I took the shot on the wing, it just felt good, looked good — it felt like we were at home (with all the fans cheering)”.

He finished the game with 22 points (including five 3-pointers) and helped the Golden State Warriors win and retain its place as best team in the NBA regular season so far (23 won, 5 lost).

During the game, Stephen Curry was wearing a wristband which says “In Jesus’ Name I Play”.

The man who is defined by many as ‘the player that has changed the game’ with his influence on the general improvement in long distance shooting, also spoke about his faith in a short video on social media after the match in which he expressed thankfulness to the fans, his family and God: “I can’t thank God enough for being there in this whole journey”.

Dream come true. In the Garden too . Thank you everybody for reaching out and showing love. This means so much to me and my family. #dubnation been with it since Day 1. 2974 and counting………..longevity, accuracy, volume, range #CrazyFaith pic.twitter.com/NAccgAqNmZ

Philippians 4:13 continues to be Stephen Curry's motto, a Bible verse printed on his personalised shoes.

The player born in Ohio has been vocal about his Christian faith for mamy years. In 2015, when he first won the Most Valuable Player trophy, he thanked “my Lord and Saviour Jesus Christ for blessing me with the talents to play this game, with the family to support me, day in, day out (…) I am his [Jesus Christ’s] humble servant and I can't say enough how important my faith is to who I am and how I play the game”.

The player has been active in charity projects in the area of fighting malaria and in improving the access to education of children in Oakland. Through his Unanimous Media film company, he has produced movies such as Breakthrough (2019) and Emanuel (2019), on the responses of family members of victims of the 2015 Charleston terrorist attack.