Fighting to prevent suicide and dispel its myths

Every 40 seconds, one person commits suicide. “Suicide is preventable if efforts are comprehensive and integrated”, the World Health Organisation says. 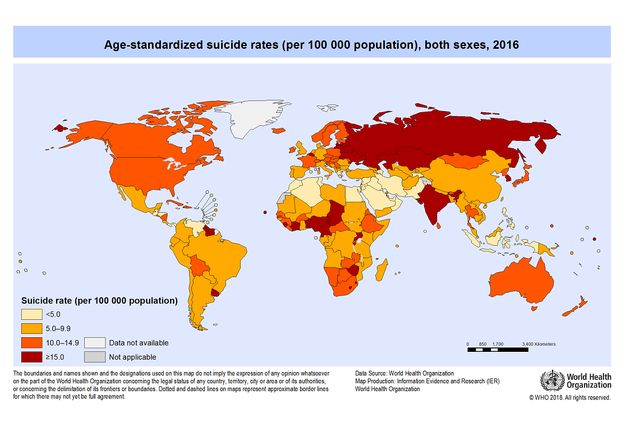 Suicide rates by age. / WHO.

Close to 800,000 people die due to suicide every year, which is one person every 40 seconds.

Additionally, there are indications that for each adult who died of suicide there may have been more than 20 others attempting suicide.

These data were pulished on September 10, World Suicide Prevention Day, by the World Health Organisation (WHO), which recognizes suicide as a public health priority.

Suicide occurs throughout the lifespan. It was the second leading cause of death among 15–29-year-olds and the 18th among the whole world population in 2016.

According to the WHO, “suicides are preventable. There are a number of measures that can be taken at population, sub-population and individual levels to prevent suicide and suicide attempts”. 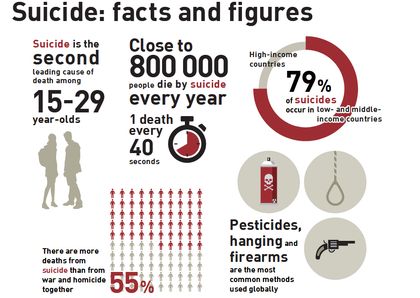 These prevention efforts “require coordination and collaboration among multiple sectors of society, as no single approach alone can make an impact on an issue as complex as suicide”, the WHO said.

“It is essential to put an end to the myths and misconceptions about suicide in order to facilitate the destigmatization of suicidal behavior, so that it will be easy for people with suicidal ideations to ask for help”, Nel A. González Zapico, President of the Mental Health Confederation of Spain, pointed out.

One of the most ingrained myths about suicide, is precisely the idea that it cannot be prevented.

It is true that “suicide is a serious public health problem; however, it is preventable with timely, evidence-based and often low-cost interventions [...] if suicide prevention efforts are comprehensive and integrated”, WHO explains.

Another mistaken belief is that people who commit suicide are selfish or brave, but the reality is that suicidal behavior is not linked to these qualities, but to a very high degree of suffering.

Contrary to popular belief, suicide attempts are not a wake-up call, but rather a manifestation of the person's desperation and pain.

Additionally, it is not true that those who want to end their lives do not warn about their intentions, since many people reveal them to their environment in some way or another. 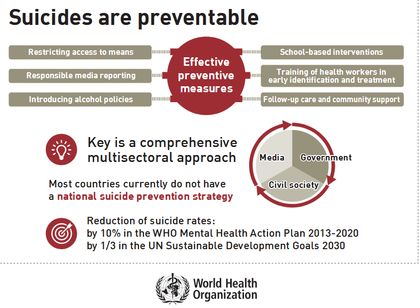 Suicide also affects the church. Recently, the case of a young pastor who took his life in California (United States) has shocked the evangelical community.

In an article published at Evangelical Focus, Paraguayan pastor Wolfgang Streich explains his personal experience, dealing with bipolar disorder and depression, which led him to attempt suicide twice.

Streich considers it essential for pastors to address this issue with sensitivity and care, avoiding condemning people who may suffer from depression, also having at hand tools for emergency interventions. In addition, he encourages the Christian community to develop “a theology of hope”.

Evangelical psychologist Esteban Figueirido said in a report on this matter, published in the Spanish news website Protestante Digital that: “What people mainly need to not to execute a suicide, is to have hope”.

Five years ago, the suicide of one of the children of Pastor Rick Warren sparked a significant movement of reflection around mental health, and how churches can help people who may be going through these situations.