“If we are Christ’s, we have no choice but to be alongside the weak”, Mukwege, who was also a member of IFES, said in a recent conference. 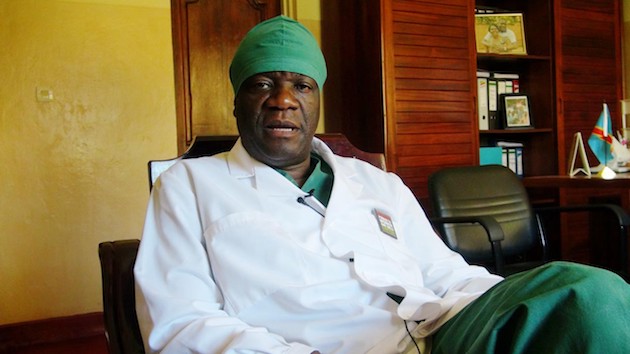 The Nobel Peace Prize for Denis Mukwege has been the recognition of a man dedicated to make a better world through his profession, in a context of extreme need, such as the Democratic Republic of Congo.

However, not many have talked about the importance of the Christian faith for this doctor who has specialized in the care of victims of rape and has become a leading activist against the “use of sexual violence as a weapon of war and armed conflict”, as the Norwegian academy said.

He founded the Panzi Hospital in 1999, which is managed by the Pentecostal Churches in Central Africa (CEPAC).

“In a region torn apart by war and years of horrific sexual violence, this man takes care of thousands of women, many of whom have been victims of brutal gang rapes. His medical expertise is saving lives and he is a bold advocate of gender equality in the country”, Daniel Bourdanné, General Secretary of IFES wrote in an article.

Mukwege is the son of a Pentecostal minister and was inspired to pursue medicine after travelling with his father to pray for the sick.

In a keynote speech he gave at the 12th Lutheran World Federation (LWF) Assembly last year, he recalled when he was with his father on a visit to the sick one day, he asked him, “Dad, you pray to the sick, but why not give them medicine? His father replied: “I'm not a doctor. My vocation was born that day”.

Mukwege studied in several countries, including Burundi, where he was part of the IFES Bible study groups. His training in medicine was developed mainly in France.

Shortly after returning to the Congo, “in 1996 the war broke out. That first war generated a new pathology in the Democratic Republic of the Congo: rape with extreme violence", he said.

THE IMPACT OF A WILD WAR

During the LWF Assembly, the doctor talked about the impact of attending his first victim: "When I treated my first patient, she had had her vagina totally destroyed by a firearm being fired point blank at her genitalia. What were initially thought of as acts by single madmen acting alone turned out some months later to be a planned systematic campaign of rape”.

According to Mukwege, “it thus became clear that these planned systematic acts of rape were being used as a weapon of war, with the aims of humiliating the enemy, destroying the social fabric, occupying abandoned land and mining raw materials and especially coltan".

CALLING TO SERVE THE WEAKEST

Although there are death threats about his life, Mukwege has continued with his work and denunciation.

“The church of today—and of tomorrow— faces a number of challenges: climate change, terrorism, migration, refugees, sexual violence and corrupt governments, particularly in Africa, who make and remake constitutions in order to protect their interests at the expense of the people”, he warned.

Mukwege believed that “if we are Christ’s, we have no choice but to be alongside the weak, the wounded, the refugees and women suffering discrimination”.

“If we are Christ’s, we must speak out, we must condemn evil. God has given the church the gift of speech for it to be the voice of the voiceless, to free the captives and always to watch for the coming of God’s kingdom”.

Although this path can lead to “meet adversity, opposition and persecution, we must not give up. We must keep on fighting to liberate the captives, to holding before us the kingdom promises and to make the words of Luther’s hymn our own: And, though they take our house, Life, honor, children, spouse,Yet is their profit small; These things shall vanish all: The city of God remaineth”, he concluded.

In addition to the Nobel Peace Prize, Denis Mukwege has previously been awarded the Sakharov Prize, given by the European Parliament in 2014.