Footballer Firmino, baptised: “My biggest title is your love, Jesus”

The Liverpool FC player was baptised by his teammate Alisson Becker. Half a million react to the video posted on Instagram: “I give you my failures and I will give you my victories as well”. 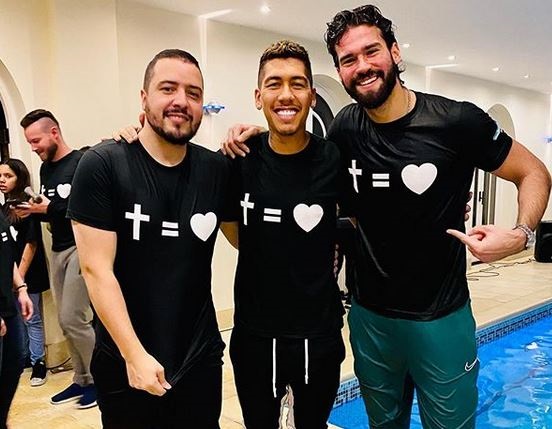 Brazilian football star Roberto Firmino has expressed his trust in Jesus Christ by getting baptised.

On 14 January, the 28 year-old Liverpool FC striker was baptised in a swimming pool, surrounded by family, friends and teammates.

After a time of worship, Firmino was joined by his wife Lari, a pastor, and teammate Alisson Becker to be baptised in water. The four of them were wearing a shirt with the message, “Cross = Love”.

Just before immersion, Firmino said: “Jesus is love, I can’t explain it… It is enough to trust, to believe in Him, and experience the Holy Spirit”.

Allison, a Christian who is very vocal about his faith, hugged his teammate and was in tears as he prayed.

A PUBLIC CONFESSION OF FAITH

Firmino later posted the video on Instagram, expressing: “I give you my failures and I will give you my victories as well. My biggest title is Your love, Jesus! ‘Therefore, if anyone is in Christ, he is a new creation. The old has passed away; behold, the new has come’ A new time”.

More than 2 million social media users viewed the video, over 500,000 'liked' it, and 13,000 responded with comments to Firmino’s public confession of faith.

OTHER CHRISTIANS AT LIVERPOL FC

Liverpool FC has several committed Christians among its players.

Alisson Becker, named best goalkeeper of 2019, has frequently spoken about his faith. “I’m a Christian, so I’m not a superstitious person”, he has said in the past. “I don’t feel lucky, I feel blessed and grateful for what God did in my life and in my family life”.

Jürgen Klopp, the manager of Liverpool is also an outspoken Christian. “Jesus is the most important person in history”, he said in an interview. “To be a believer, but not to wanting to talk about it - I do not know how it would work!”

Liverpool FC is Europe's top football team, after winning the 2019 UEFA Champions League in May. The team also leads the 2019-2020 English Premier League.