In ancient times carob pods were used to feed horses, donkeys and pigs, though they could also be used as a source of food for humans. 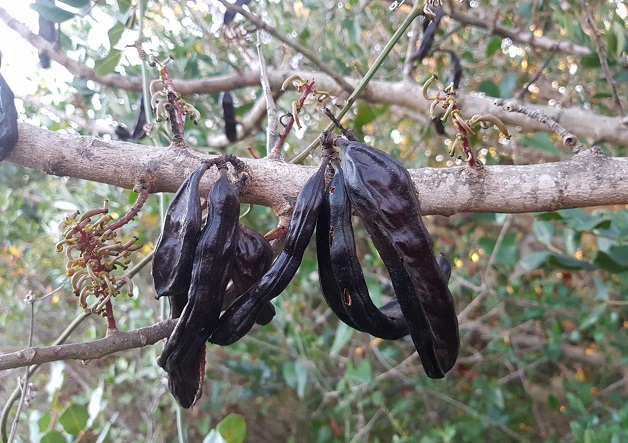 After he had spent everything, there was a severe famine in that whole country, and he began to be in need.

So he went and hired himself out to a citizen of that country, who sent him to his fields to feed pigs.

He longed to fill his stomach with the pods that the pigs were eating, but no one gave him anything.

The carob tree, which usually does not exceed 10 metres in height, has a short thick trunk and long branches, some of which bend right down till they touch the ground due to the weight they carry. Its leaves are perennial and are made up of several pairs (three to five) of small, smooth-edged, stiff, shiny, non-pilous, oval-shaped, leathery leaflets). The flowers typically form little clusters on the older wood, rather than on the youngest most tender branches, as occurs with most trees. There are female trees which produce only female flowers and the carob bean-pods, and male trees which bear no fruit, as all its flowers are male. In Spain, the latter variety are popularly known as Jewish Carobs (anti-semite prejudices?). Finally, there are also carob trees that produce flowers of both sexes, with a stamen and pistil. For this reason, the carob is often said to be polygamous, as it has these three different types of flowers.

The carob belongs to the leguminous plant-family, originating in the East, but liberally distributed all around the Mediterranean basin. It is abundant in Syria, Israel and Egypt, as it thrives in the poor chalky soil of these coastal areas. The fruit of the carob tree, carob beans, come in long, flat, hard pods measuring between 10 and 25 centimetres long and about 3 centimetres wide. Thy have a reddish colour and a pleasantly sweet taste. The generic term Ceratonia comes from the Greek word ceras, which means “horn”, due to the shape of the pods.

In ancient times carob pods were used to feed horses, donkeys and pigs, though they could also be used as a source of food for humans. During the Spanish Civil War and the post-war period, they became a staple, as people had no access to any other source of food. In Catalonia you can still hear the expression: “guanyar-se les garrofes” (to earn your carob-beans), meaning “to make a living”. Nowadays, on account of their high sugar content (up to 50%), carob beans are used in the cake-making and ice-ream industries, though they are also still fed to animals. A large proportion of the carobs produced in Mallorca, for example, are exported to Finland to feed the reindeer in Lapland.

The physicians of ancient Egypt made an adhesive from carobs, now known as “locust bean gum”, which they used to hold together the bandages in which they wrapped the bodies of their mummies. The unique properties of this product have enabled these bandages to remain intact through the centuries.

The Bible also refers to carob beans, or locusts, in the story of the prodigal son in the gospel of Luke (Luke 15:11-32). Those who are familiar with the Bible will, on hearing the term “carob pods” or “locust”, automatically recall this parable, as it is arguably the most glorious of all the stories Jesus told. The carob is inseparably associated with hunger. No one would eat them if any other type of food was available. And the prodigal son, a promiscuous self-centred, spendthrift, who preferred to live among pagans, found himself on the lowest possible rung that is was possible for a Jew to be on. He was reduced to living in squalor, looking after pigs and even eating the food that they ate, those abominable carob pods. He not only looked after pigs, he actually lived like one of them!

Sometimes we need to hit rock bottom in our lives before we see the reality of the plight we are in. This man began to take stock, and realised deep in his inner self that he had sinned against God and against his father. He realised that he was not worthy to be his father’s son, and decided that he would return home and ask to be made just another servant. Repentance and conversion are not just about having airy-fairy good thoughts, but about taking radical, life-changing action. The prodigal son got up and returned to his former home.

We all know how the story ends. The father saw his son from a distance. He had compassion. He ran with all his strength (which was considered ridiculous and undignified in an elderly Jew). He threw his arms around his son’s neck, kissed him, forgave him for his rebellion and restored him to his position as son. This is exactly what Jesus Christ still does today when someone repents and returns to Him, leaving behind his life of consuming carob pods.