The Egyptian vulture in the Bible

Why is it that, despite feeding on decomposing animal flesh, vultures never catch any diseases? 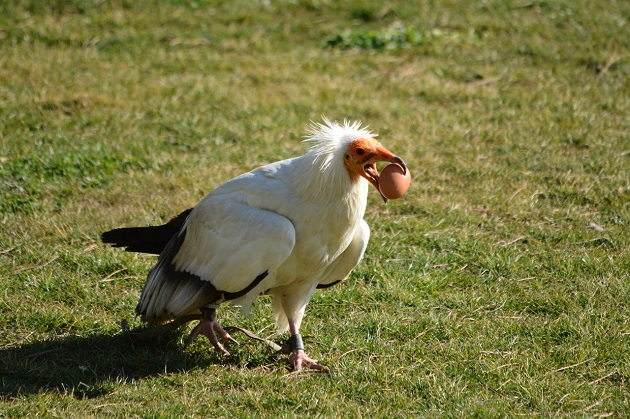 “These are the birds you are to regard as unclean and not eat because they are unclean: the eagle, the vulture, the black vulture…” (Leviticus 11:13)

The Hebrew word rãhãm (Lev. 11:18) or rãhãmah (Deut. 14:17) was translated into English, by the Committee appointed by King James of England in 1604 (the King James Bible), as “Egyptian vulture” (or alimoche, Neophron percnopterus).

The Egyptian vulture is quite common in both Israel and Egypt. In Egypt the birds were also known popularly as “Pharaoh’s hens”, and were regarded as his protectors. The Egyptian queens often wore a vulture shaped diadem on their heads. Besides, the Arabic word for the Egyptian vulture is very similar to the Hebrew word raham), which supports the case for this translation. The most likely reason for them being referred to as protectors was their tenderness and patience in caring for their chicks.

The common Egyptian vulture is one of the smallest vultures in the world, with a wing span of a metre and a half and weighing only about two kilos. The adults’ wings are the same colour as those of the white stork, black and white. When they are flying, and their wings are silhouetted against the blue sky, their white plumage looks spectacular. Their talons, in common with all other vultures, are relatively weak and have been adapted to enable them to run rather than for holding down prey.

They are distributed throughout the African continent, southern Europe, from Spain to the Middle East, and some parts of India.

One curious behaviour pattern of this species of vulture is their ability to break the eggs of other birds in order to eat them. They are even able to break ostrich eggs by throwing stones at them with their beaks or dragging them to the edge of a cliff and throwing them over. They frequent dung piles and rubbish dumps in search of carrion, excrement and the carcasses of animals. It is not surprising therefore that they feature in the Hebrew lists of unclean animals, as fowl that could not be eaten.

Apart from its beneficial role they play in ecosystems by eliminating carcasses, and therefore many possible sources of infection, and, by the same token, by protecting certain species in danger of extinction, as is actually the case with this bird itself, the Egyptian vulture reminds us of the words of Jesus when he referred to the “whitewashed tombs”, in relation to the hypocrisy of the scribes and the Pharisees: “Woe to you, scribes and Pharisees, hypocrites! For you are like whitewashed tombs, which outwardly appear beautiful, but within are full of dead people's bones and all uncleanness. …” (Matthew 23 v 27).

In spite of everything, every human being should be grateful for these necrophagous birds which are constantly ridding the environment of bacteria and parasites which could be detrimental for humankind and other living things. Why is it that, despite feeding on decomposing animal flesh, vultures never catch any diseases?

The secret lies in the distribution of their bacterial flora, and in the remarkable acidity of their stomach. Vultures were equipped with a mechanism which can kill the dangerous microbes, like the Clostridia and Fusobacteria, that live in the bodies of other decomposing animals. By contrast with human beings, most of a vulture’s microbiome (or bacterial flora) lives on the skin of its face and in the beak, while its intestine has relatively little. We humans, on the other hand, have a greater diversity of microbes inside our mouth, stomach and intestine than on our skin or on our face. 520 different types of bacteria have been found on the faces of these birds, and only 76 in their intestines, which means that during digestion vultures “fry” and destroy everything that passes into their stomachs. They even completely destroy the carrion’s DNA. By contrast, it is the bacteria that live in human intestines that cause us most problems.

In this way, despite appearances to the contrary, vultures and other carrion fowl, should not be held in contempt as ‘hypocrites’. On the contrary, they are animals which are of enormous value to the ecosystem and to humankind, as they constitute a mobile and free-of-charge sanitation factory, capable of eliminating thousands of tons of rotting flesh, which could pose a threat to public health. Therefore, we should respect them and protect them because, like every other created life-form, they reflect the design and the wisdom of God.

Published in: Evangelical Focus - Zoe - The Egyptian vulture in the Bible