“Atheism is loud and noisy, but does not have good answers” 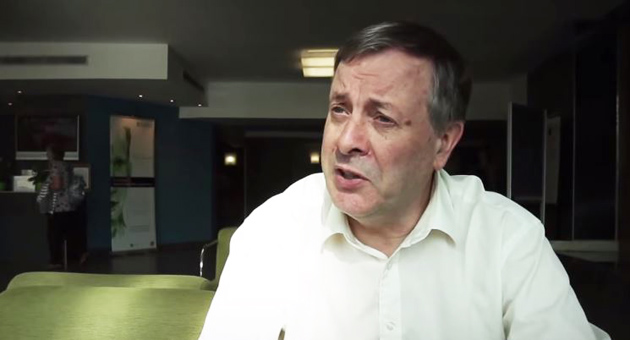 Alister McGrath thinks that the aggressiveness of the New Atheism is due to “it’s failure in predicting that religion would disappear”.

It is one of the ideas he shared at Forum Apologética 2014 (Barcelona, Spain). During his participation in the gathering, we recorded the following interview (see Video at the end of this article).

McGrath is one of the most prominent Christian apologists nowadays. After leaving atheism, he has publicly debated with well know humanists like Richard Dawkins. Born in Northern Ireland, he studied Chemistry in Oxford, and has now 3 PhD's.

McGrath is professor of Science and Religion at Oxford University and King’s College of London, as well as the president of OCCA (Oxford Centre for Christian Apologetics).

This is the short interview we had with him during a break at Fórum Apologética.

Q. How can Christians respond to the aggressiveness of the New Atheism?

A. They must not be aggressive in response, they must be gracious. They must be reassured that there are very good answers we can give, and we must give these answer calmly, graciously, but knowing that atheism is loud and noisy, but does not necessarily have good answers.

Q. Do you think society is starting to see some of the weaknesses of New Atheism?

A. I think that atheism has gained a very high profile recently through Richard Dawkins and others. And people have looked very closely at atheism, perhaps more closely than ever before. And they are realizing its very empty, very shallow, and very aggressive, and they feel this is not something they really like very much. So I see a movement away of atheism, and it may have had media attention for a short period, but now people have realized it has got nothing very much to say.

Q. What would you say to those Christians who are scared of science because it could challenge their faith?

A. I am going to say that the scientific method is neutral about the God question, it always has been, and it always will be. There is no need to be frightened by Science. What we need to realize is that Christianity gives us a framework, a way of looking at things that helps us to understand why the science works, that is able to fit in the sciences, but also gives us more than what the sciences can offer. The sciences are limited, they cannot tell us anything about the meaning of life, and scientists are human beings who want to know about meaning, not just about the structures of the world.

Q. What authors would you recommend?

A. I think I continue to recommend C.S. Lewis, was a very good writer. “Mere Christianity” is an excellent starting point. For those who are worried about science and faith, read John Polkinghorne, I think he has much to say that you would enjoy. And, of course, if you are really stuck, you can always try reading my own books, which might give some help as well.

Published in: Evangelical Focus - science - “Atheism is loud and noisy, but does not have good answers”