Paris and the World: a before and an after?

A Christian voice in a Paris that attempts to lay a green mantle over a mourning city. 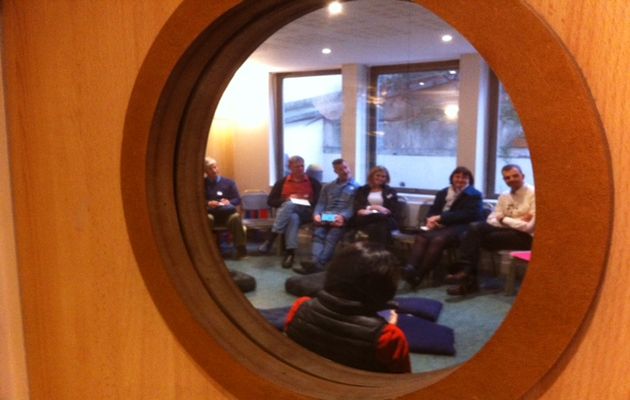 Workshop at the Christian conference in COP21

Part 1: A Christian voice in Paris

Paris today is a city struggling to overcome the terrible effects, images and resulting fears of the 13th of November attacks by terrorists.

Few uniformed police on the streets now, the bars and restaurants back to normality, despite a drop in tourism. Children playing in the parks and people strolling along the avenues, the Marianne monument to liberty, equality and fraternity in the Republique square now covered in flowers.

Candles and messages in different languages, and a city covered in messages about climate change and the COP21 conference in the Bourget.

This conference promoted by the UN is centering the attention of the media at present, with prophetic statements read out by high ranking politicians who jetted in for the start of the conference, but which generates great doubts from observers and journalists that the conference will end with agreements and commitments which countries will agree to or even then after agreement, carry out.

The aim is to reduce green house gases by the end of the century to 2% or less an increase from the pre-industrial revolution times.

For many the future of human existence on this planet is at stake and this is the last chance to avoid catastrophic consequences. According to 97% of scientists investigating climate change, the instability in the atmosphere resulting from the predicted increase in green house gases (GHGs) will lead to changes which will result in great political and economic instability. 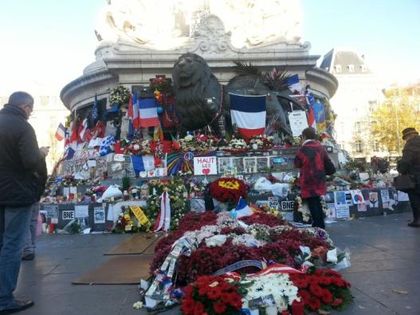 Despite this scientific consensus, the ‘top boxers’ of the world scene, the EU, the USA, India and China continue to scrabble in dialectic fights over the differentiation between the chief consumers to date: the emerging economies, avid for fossil fuels to create rapid economic development, and the rest of the world.

Economic development in the western countries in the last two hundred years has been made possible by the application of technology to fossil fuels, thus producing a great variation in the level of comfort and lifestyle of different countries, and political and economic systems, supported by their military forces, that strive to maintain the status quo.

But what was not expected was that the burning of these fossil fuels of coal, petroleum and natural gas would have such a great negative impact on the peoples of the whole globe, affecting, due to the changes in climate and weather patterns and sea level rise, populations that are more vulnerable to these changes, living close to sea level or depending on rainfall for their own subsistence.

It is also difficult to support the demands of the wealthier countries that the developing economies, such as India and China, should now restrict their consumption of fossil fuels so as not to produce so many GHGs, when the present problem has been caused by the same industrialised countries that are proposing these restrictions.

This is the 21st conference of the parts, the nations that have come together to find solutions to the problem.

Starting in the 90’s the countries have not come to any significant agreement on the reduction of fossil fuel consumption, as they did successfully with the ozone layer destruction in the Vienna Convention in 1985 and the Montreal Protocol in 1988. This is a good example of how countries can, with agreement, resolve global problems that affect all. 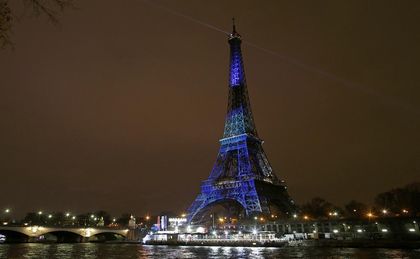 But with fossil fuels, there are much too higher stakes, for many countries. There seems to be too much to sacrifice, too much to lose, if what is proposed goes through.

What is the situation now, at this stage in the negotiations? “In the Paris Summit the issue is not just climate change, but also the capacity of the human race to govern the world”, says the Spanish newspaper El País’ correspondent. “As a replication of world government, this COP21 is rare. We have a multi-polar world without a multilateral government.

It will be a miracle if we have satisfactory and long term solutions, beyond the actual propaganda and the diplomatic and political show. In any event, the Paris conference is an excellent mirror of the present world geopolitical situation, where the weight of each of the countries is made manifest, those sovereign parts of the world that meet yearly with the at least lip purpose to save life in the world.” A miracle, he says.

A DAY-LONG CONFERENCE WITH CHRISTIAN VIEWS

In this Parisian scene a Christian voice has been present for the first time through the presence of the Philippine bishop Efraim Tendero, Secretary General of the World Evangelical Alliance, and Katharine Hayhoe, recognised climate scientist and an evangelical, in their participation in the green zone of the Le Bourget conference centre, in the northern suburbs of the city.

Taking place on the evening of the 4th of December, it was followed by a day-long conference in St. Michael’s Church, organised by A Rocha, the UK based Christian NGO, in collaboration with the Lausanne Creation Network.

This last initiative arose from the commitments acquired by more than 4000 evangelical leaders in the Lausanne III conference in Cape Town, South Africa in 2010. The Spanish Committee of Lausanne III, which had met the previous week in Madrid, included in its agenda for present and future work the care of God’s creation, reflecting the section in the document, ‘God’s peace for a suffering creation’. 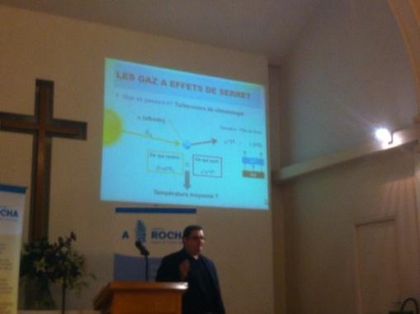 While the block of Greenland ice slowly melted in the square in front of the Pantheon, burial place of kings and queens and heroes of the French state (see image), the atmosphere in St. Michael’s church warmed up with the first presentation, that of Dr. Antoine Bret, physicist, on whether we can trust climate science.

His conclusion, shared by Katharine Hayhoe in her evening presentation, is that serious scientists no longer debate the question as to whether or not global warming is the result of man’s actions.

The presentations alternated between French and English, giving the translators a hard time, and the Oxford researcher Dr. Dominic Roser, presented the ethical implications of this system, and how we can have justice in a word with an increasing temperature.

The morning ended with a clear and concise presentation by Reverend David Bookless, author of ‘Planet Wise: Dare to Care for God’s World’, on what the Bible says on climate change and the present debate, rebutting the five main arguments Christians pose against trying to reduce global warming.

There followed five workshops, focusing on how local churches can reflect practically the biblical principles of creation care (Paul Hege), Signs of hope (Max Boegli),
God, Climate and Geology (Dr Chris Walley), reflections on the viability of science from Dr. Bret, and continued discussion on what the Bible says on climate change and our practical response, in the light of the Bible, from Reverend Bookless, A Rocha’s theologian. 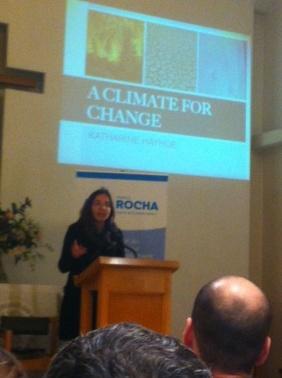 After further contributions, such as the response to the Philippines cyclone, the evening conferences took place, with Bishop Efraim Tendero and Katharine Hayhoe, author of ‘A Climate for Change’, ending with a brief summary from Dr. Henri Blocher (photo below), well known biblical scholar, who formed part of the Lausanne movement’s leadership between 1975 and 1980.

All the content of the day in English and French, will be available on the A Rocha website shortly.

PARTICIPANTS FROM ALL OVER THE WORLD

The participants were from all over the world, including tyhe USA, Ecuador, Canada, Singapore, the UK and many from France, but there was a significant absence of Spanish speaking participants, reflecting perhaps the limited importance that the biblical teaching on creation care is given in Spanish evangelical churches, although there is significant activity in South – America.

What is needed, according to the participants? ‘Changement climatique… changement de coeur’, said the banner. ‘Climate change… a change of heart’.

Paris, a before, and an after. Jesus is the Lord, the sustainer and redeemer of all creation, and expects us to serve Him and obey his commandment to be responsible stewards of creation, to love his good work, to care and look after it, and love all his creatures, animals and mankind.

There is no fear here, unlike the preoccupation of a world where the material seems to be slipping away. But more of this in Part II of this report.

Published in: Evangelical Focus - science - Paris and the World: a before and an after?