Ten years later: “It is no longer a spring but an Arab winter”

Evangelical leaders from the Middle East and North Africa analyse the impact of the uprisings that began in 2010, and the current situation.

2021 marks the tenth anniversary of the start of the 'Arab Spring' and the situation is far from the initial objectives./ Twitter @iehutin

On 17 December 2010, Mohamed Bouazizi committed suicide in the Tunisian town of Sidi Bouzid. Less than a month later, mass protests that began over his tragic end, spread across the country and led to the fall of President Ben Ali after 23 years in power.

The demonstrations created high expectations and spread to Egypt. A month later, they ended with the resignation of president Hosni Mubarak, after 29 years in power.

“It started in Tunisia with a simple man burning himself and Tunisians just demonstrating against de low payments or the economy that was collapsing. What happened in Tunisia became the epicentre of the Arab spring that spread in many countries like Egypt, Syria, Libya, some even Gulf countries and Yemen”, recalls the General Secretary of the Middle East and North Africa Evangelical Alliance (MENA), Jack Sara.

However, the expectations of the popular outcry dashed over the years or took even more unexpected directions. In Morocco and Algeria, the government managed to contain public indignation using violence, but the revolutionary germ has remained dormant in these territories throughout the decade, leading to new mass protests in Algeria, which ended 20 years of Abdelaziz Bouteflika's rule, and a new stage of the Sahrawi conflict in Morocco.

In Syria, the protests against Bashar al-Assad prompted a war that has lasted ten years, with more than half a million people dead, and it has provoked the resurgence of Islamic radicalism with Daesh (Islamic State).

The fall of Muammar Gaddafi in Libya was followed by the disintegration of the country and the beginning, in 2014, of a war that still continues.

Furthermore, the conflict in Yemen has left more than 7.4 million people in need since 2014, according to the UN Refugee Agency (UNHCR); and there have been demonstrations in Iraq again, against the precarious economic and social situation on a country that has yet to rebuild after the US invasion and the fight against Daesh.

“After ten years of the so called ‘Arab spring’ we do see a major changes in many of our countries. Nevertheless, it doesn’t mean it was a change for the better. What started as an Arab spring that was supposed to bring a positive results, did not do so”, stresses Sara.

According to the Algerian evangelical pastor Nourredine Benzid, “It is no longer a spring but an Arab winter, because all the legitimate hopes of the people who revolted against injustice, asking for freedom, social justice, respect, individual freedoms... They evaporated because today they are oppressed by their own government”. 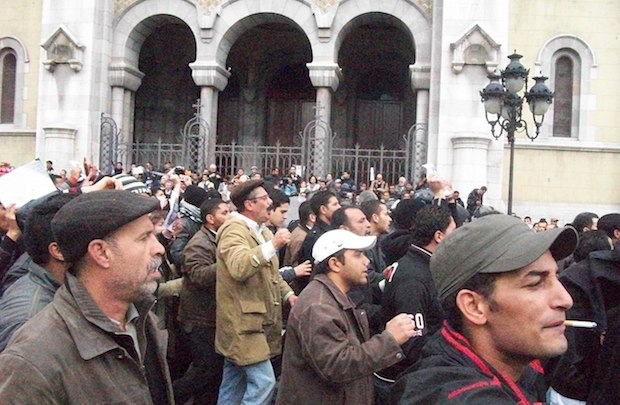 Tunisia became the epicentre of the Arab spring that spread in many countries of the region. / Magharebia, Wikimedia Commons .

Sara believes that “the situation is even worst in many countries” and others like Tunisia, “experienced changes, some of them positive and some of them negative”, but “the rest of the Arab countries, except for Egypt, have not changed for the better”.

The Director of the Bible Society of Egypt, Ramez Atallah, points out that “social and economic situation in Egypt is very difficult to assess. We are seeing a boom in all aspects of life with tremendous development projects, electricity, solar energy, transportation, bridges, highways…etc. We also have seen tremendous increase in business enterprises like fast food chains, speciality goods, everything you can imagine. Our car industry is booming with more cars being sold now than in several years ago”.

“However, alongside this, and because of the pandemic, we see incredible poverty and many people who are struggling to survive particularly in the tourism sector and other sectors that have been affected”, he adds.

The fall of Mubarak in 2011 was followed by a one-year interim government by the then head of the armed forces, Mohamed Tantawi. Elections were held in 2012 and the pro-Muslim Brotherhood candidate Mohamed Morsi won.

After half a year in power, new protests broke out and dragged on for several months. Barely a year after assuming the presidency, Morsi was arrested and the army once again took control of the government on an interim basis.

New elections were held in 2014, won by former military officer and one of the key figures in Morsi's arrest, Abdelfatah El Sisi, who was re-elected in 2018 and continues to hold the presidency.

Atallah recalls that “Christians joined in the demonstrations against the Mubarak administration as did most of the moderate Muslims in Egypt”.

“Many evangelical churches were in the streets helping people in need or injured. We know the great example of a church in El Cairo, Kasr El Dobara, which is very close to the Tahrir Square where the demonstrations took place. They built a mobile hospital in one of the halls of the church, where they help the injured people. They provided water, food and other things for the demonstrators. They also have a place where they sang songs for the Lord and prayed for Egypt”, underlines Sara.

According to Atallah, “some of the changes that the revolutionaries dreamed about were unrealistic and cannot be expected in a developing world country. The worldwide political scenario has proved that even so called free countries like the United States and Great Britain have a very turbulent and confusing political situation, with the British nearly equally divided for and against Brexit, and the Americans nearly equally divided from the right and the left”. 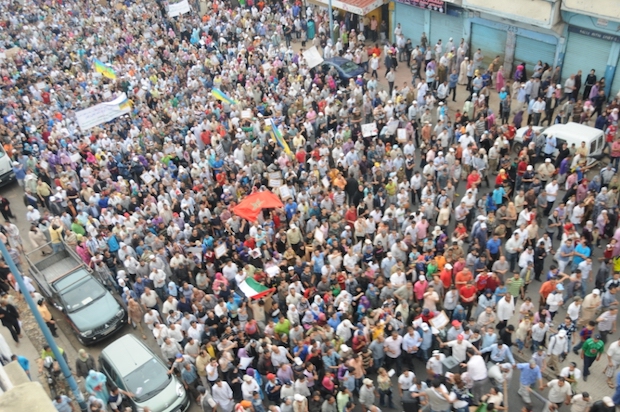 Although there were protests in Morocco, no significant changes have taken place there. / Magharebia, Wikimedia Commons .

“Egypt is the only country with positive changes in religious freedom”

“This kind of democracy is stifling and confusing, so our strong leadership in terms of government in Egypt makes things much more stable and secure”, stresses the Bible Society Director.

Some international institutions questioned the arrest of Morsi and the outlawing of the Muslim Brotherhood in Egypt, and human rights organisations have described the events of 2013 as a 'coup d'état'. Christian leaders in the country and in the region agree that some individual rights and freedoms, such as religious freedom, have improved.

“Egypt is the only country with positive changes in the area of religious freedom. I think the Egyptian Christians, and evangelicals in particular, are pleased and happy”, says Sara.

Atallah agrees that “Christians in general believe that Sisi has been good for them. He is the first President in Egypt’s history to attend the annual Christmas services at the Coptic Orthodox Cathedral and give a brief talk to all of Egypt. He is also one of the few leaders in the world who has spoken courageously against Muslim extremism and has condemned it . He has also called Christians ‘co-citizens’ and not just ‘Christian’”.

“Healthier atmosphere to raise our children than the secular liberal West”

Open Doors, an organisation that monitors the persecution of Christians around the world, considers that Egypt's attitude on this issue has been linear. The country has ranked 16th on its World Watch List for the last three editions.

“Egypt is not a country where Christian persecution is the norm. People who say so simply do not know reality. There is discrimination of Christians particularly in the South and in poor communities where Christians could be a small minority. But the fact that 30% of Egypt’s wealth is in the hands of Christians, that the richest families in Egypt are Christian, that Christians have high positions in government, universities and Parliament, shows that we are in the best time for Christians since the 1952 Revolution”, says Atallah.

The Bible Society Director recognises that “it is true that to help support the fight against Muslim radicalism there have been very strong restrictive laws and regulations, and in some cases, these have affected innocent people who have been taken along with the guilty ones”.

However, “these cases are highlighted in the media outside the country and make others think that there is much persecution, which is not the case. If you look at all the countries around us, Egypt is the safest country, the one that is growing faster, and where life goes on more normally than could be expected during this very difficult pandemic”.

Atallah adds that “Because Egypt is a country where the constitution says that we believe in God and because Christian and Muslim values are very close in terms of morality, committed Christians feel freer than in a Western country to express their opinions on their values. It is a much healthier atmosphere in which to raise our children than in the secular liberal West”. 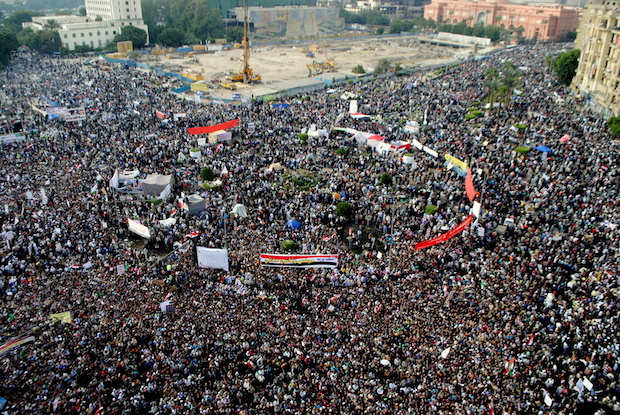 “Evangelicals should be involved in influencing positive political changes”

The General Secretary of MENA Evangelical Alliance explains that “in most countries evangelicals don’t want to be part of the politics. There are many feelings against it. They think politics are not for the church because the church should only be involved in evangelistic work. Except for Egypt, this is the general attitude of the evangelicals across the Middle East and North Africa”.

“The role of evangelicals is insignificant because they are not even recognized. The church is persecuted throughout the region without exception: if it is not the Islamists, it is the governments. The impact of evangelicals is much more spiritual than political, because we have no rights”, stresses the Algerian evangelical pastor Benzid.

According to him, “our presence greatly disturbs the political systems in place because millions of Muslims flee Islam to convert to Christianity. We are not accepted, but sometimes just tolerated for a limited time”.

While in some cases, such as Tunisia and Egypt, there is al moderate coexistence, in other countries the pressure on Christian minorities has drastically grown.

Algeria has moved from 42nd on the 2018 Open Doors World Watch List to 24th in the latest edition, after the government closed thirteen Protestant churches across the country.

The war in Libya has also intensified the presence of jihadism in the country, where Daesh executed a group of Christians in 2015 and released the images worldwide.

“Evangelicals should be involved in influencing positive political changes, to bring religious freedom, to bring democracy. Yet, sadly, evangelicals who are engaged in this are very few, if there is any. They withdraw from politics because they think our meaning should be more preaching”, concludes Sara.

Published in: Evangelical Focus - world - Ten years later: “It is no longer a spring but an Arab winter”