Evacuation in Afghanistan draws to a close after Kabul blasts

Two bombing attacks in Kabul's airport killed at least 90. European governments are hurrying to evacuate as many people as possible, some have already finished evacuations. 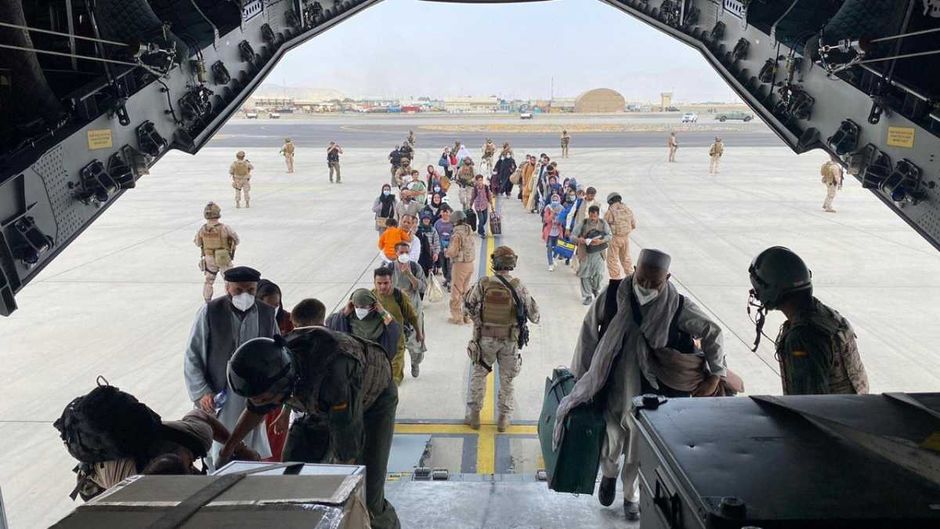 Afghans being evacuated in a Spanish plane. / Screenshot RTVE.

At least 90 people, including 13 US service members, have been killed this Thursday in two bombing attacks outside Kabul's airport, according to Afghanistan’s Ministry of Public Health and the US Central Command.

There are also more than 150 people wounded by the blasts. The attacks took place just hours after western intelligence agencies warned of an imminent threat, while most countries were racing to evacuate people ahead of August 31 withdrawal deadline.

John Kirby, Pentagon spokesman,explained that one of the explosions happened “at the airport's Abbey Gate" and “at least one other explosion happened at or near the Baron Hotel, a short distance from Abbey Gate".

Abbey Gate was the main entry point to the airport and primary security there has been provided by US Marines, while Baron Hotel was used by British soldiers and other allies as an evacuation handling center to process evacuees, before moving them up to the Abbey Gate.

Islamic State claimed responsibility for the attacks. Amaq news agency said on its Telegram channel that an IS member of its branch in Khorasan, known as ISIS-K, carried out “the martyrdom operation near Kabul Airport”.

US President Joe Biden spoke from the White House, calling the troops “heroes" and saying he was “outraged as well as heartbroken".

“We will not forget. We will hunt you down and make you pay. I will defend our interests and our people will every measure at my command”, added Biden.

American forces in Kabul are bracing for more Islamic State attacks. Marine Corps General Frank McKenzie, head of the US military’s Central Command, pointed out in a news briefing that they are they are “focused on other extremely active threat streams to the airfield. Those threats could be imminent" and could occur at any moment".

Many counties are hurrying to evacuate as many people from Afghanistan as possible and some of them have already finished it.

Germany’s Defense Minister Annegret Kramp-Karrenbauer said in a tweet this Friday that their troops are “all safely back from Kabul”. Germany’s armed forces have used Tashkent, Uzbekistan, as a staging post for evacuations from Afghanistan.

Spain has ended its evacuation mission, the country’s Presidency said in a statement. The Spanish Armed Forces has “evacuated a total of 1,900, Afghans and their families".

Two military planes carried out the last 81 Spaniards “including military personnel and embassy personnel" remaining in Afghanistan, along with four Portuguese soldiers and 85 Afghans and their families who had worked with NATO countries.

Ben Wallace, the UK Defense Secretary, said this Friday that the country's evacuation efforts will end in a “matter of hours".

UK's main processing center outside Kabul airport is now closed: “We closed the Baron Hotel, almost exactly on schedule. The explosion was horrendous. But it didn't hasten our departure, we were going last night”, Wallace told Sky News.

Wallace also said in a statement that more than 13,000 people had been evacuated in 14 days, but “It is with deep regret that not everyone has been able to be evacuated during this process”.

The French  government stressed in a statement that they will see its evacuation mission “through to the end and will maintain its humanitarian and protection efforts for Afghans under threat,” despite Thursday’s deadly attack.

Furthermore, the French Defence Ministry said that, as of Thursday evening, more than 100 French nationals and more than 2,500 Afghans had reached French soil after being evacuated from Kabul.

Evacuation finished in many European countries

The last Italian transport plane, carrying some 50 Afghans, is set to depart from the airport in Kabul this afternoon, news agency ANSA has reported. A total of almost 5,000 people have been evacuated from Kabul by the Italian military after the fall of Kabul.

Sweden has also ended its evacuation mission in Kabul. “All in all some 1,100 people have been evacuated by the Foreign Ministry. All locally employed embassy staff and their families have been evacuated”, foreign minister Ann Linde confirmed in a news conference.

Turkish Foreign Minister Mevlut Cavusoglu said earlier this week that Turkey has evacuated at least 1,400 people from Afghanistan, including around 1,000 Turkish citizens.

The Dutch government said on Thursday it had evacuated 2,500 people from Afghanistan since Aug. 15, with about 1,600 of them brought to the Netherlands. The Dutch ambassador left on the final flight on Thursday

Belgium, Poland, Hungary and Denmark have already ended the evacuation, with over 1,400, 900, 540, and around 1000 people airlifted respectively.

Meanwhile, Austria and Switzerland, are relying on Germany and other countries to help with their evacuation efforts. So far, 89 people have been airlifted evacuated and two to three dozens are still in Afghanistan. 292 Swiss citizens are out of Afghanistan.

Christian organisations involved in the reception of refugees

According to UK news website Premier, more than 100 churches in the UK have joined together to help welcome Afghan refugees.

Welcome Churches and Hospitality Pledge are two organisations encouraging the reception of refugees. Krish Kandiah, leader of the Hospitality Pledge project, expressed his satisfaction with the “speed with which churches have responded".

“We have identified some of the regions where these resettlement hotels are going to be. So, we are working with the Home Office to provide practical support. People have arrived with very little, so that churches have been sourcing prams and clothing...there are so many things that churches can do".

Prime Minister Boris Johnson announced that the UK will take in up to 20,000 vulnerable Afghan refugees through a special resettlement scheme, who are expected to arrive over the next year, although many will already be arriving during this week of urgent departures from Kabul.

Published in: Evangelical Focus - world - Evacuation in Afghanistan draws to a close after Kabul blasts