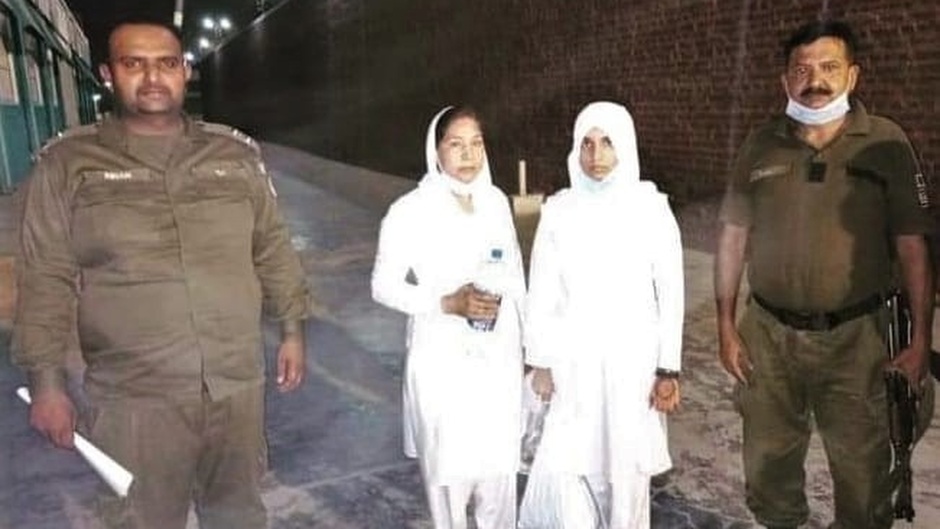 Usually those charged under Pakistan’s widely condemned blasphemy laws even with little or no evidence languish in jail for years until verdicts and appeals are exhausted. Nurse Mariam Lal and student nurse Nawish Arooj, arrested on April 9, received bail from a sessions court on Sept. 23, attorney Atif Jamil Paggan said.

They were charged in Faisalabad under Section 295-B of Pakistan’s blasphemy after an Islamist mob on April 9 strode into their workplace, Faisalabad Civil Hospital, and demanded “death to blasphemers.” Conviction for defiling the Koran is punishable by up to 10 years imprisonment and/or a fine.

“This is an unprecedented decision by any sessions court in a blasphemy case,” Paggan told Morning Star News.

He added that the bail was kept secret due to fears over security of the nurses from possible reprisal by Islamists, mainly the Muslim extremist Tehreek-e-Labbaik Pakistan (TLP), a formerly banned political party. Security fears also kept the judge from requiring the two women to appear at a court hearing on Nov. 8, Paggan said.

On the day the two nurses were accused, a Muslim co-worker attacked Lal with a knife.

“Both women are currently in a safe location,” Paggan said. “They are very happy and relieved after this court victory, and we are optimistic that the court will absolve them of the charge once the trial concludes.”

The defense’s hopes were buoyed after a key witness for the prosecution, a Muslim head nurse identified only as Rukhsana, failed to appear in court on Thursday (Nov. 18) for cross-examination, he said.

“She has sought exemption on maternity grounds, but we think that she is now avoiding the court because she had falsely accused Ms. Lal and Ms. Arooj over a personal grudge against the former,” Paggan told Morning Star News.

Lal told police that a senior Muslim nurse had directed her and Arooj to remove all old wall hangings and stickers, some of them inscribed with Koranic verses, from the psychiatry ward of the hospital. She said Rukhsana objected to Arooj’s removal of a half-torn sticker inscribed with the Durood Sharif, an exaltation prayer used for Muhammad, the prophet of Islam, from a wall cabinet.

In granting bail, Ahmad observed that both women had admitted to removing the sticker but denied they had done so with any ill intent to desecrate the holy inscriptions.

“Moreover, the prosecution failed to prove intentional defiling of the Koran inscription,” Ahmad said. “There was no witness who had seen the two women committing any disgraceful act with the sticker. Charging someone with blasphemy for simply holding a religiously-inscribed sticker is not sufficient evidence.”

The judge ordered their release on surety bonds amounting to 100,000 rupees (US$571) each, Paggan said.

Paggan said it would be impossible for the two nurses to return to work at the hospital.

“Ms. Arooj was a student, but Ms. Lal was a senior nurse there,” he said. “She cannot even demand her outstanding salaries because she would have to go to the hospital for it, and it’s definitely not safe for her.”

During their imprisonment, Lal’s neighbor, a Muslim, attempted to seize possession of her family’s house by invoking the blasphemy case, Paggan said.

“The man was trying to stoke anger in the neighborhood against the family, but timely intervention by the police helped us in protecting their property,” he said.

He said Islamist parties have not yet reacted to news of their release.

“We are hoping that the situation remains under control, but the danger of violent protests will always loom,” he said.

Phone video recorded by an unidentified hospital employee on the day of the incident showed a Muslim co-worker telling a mob that he had attacked Lal with a knife when he “saw her ask Ms. Arooj to tear off the sticker.”

“I could not remain silent over blasphemy of our holy prophet, so I attacked Mariam,” the assailant, identified only as Waqas, tells the group, who during the recording shout slogans praising Muhammad and call for the hanging of the two women. A member of the group states, “The prophet’s respect is more precious than my life or yours.”

As word of the incident spread, an enraged mob, including members of the TLP, converged on the hospital, raising fears for the security of the two nurses and other Christian workers.

“Fortunately, a large police contingent arrived just in time to take the two women into custody safely,” a source had told Morning Star News at that time. “We pleaded for the police not to register the FIR [First Information Report] before thoroughly investigating the allegation, but they succumbed to the pressure of the mob.”

The case followed an attack in January on another nurse. Tabeeta Gill, a nurse at a Karachi hospital and a gospel singer, was slapped, beaten and locked in a room by a violent mob on Jan. 28 after a Muslim co-worker baselessly accused her of blaspheming Islam.

Police initially cleared her of denigrating Islam’s prophet but later succumbed to pressure of a mob that converged on their station and charged her with insulting Muhammad, punishable by death under Section 295-C of the blasphemy statues.

False accusations of blaspheming Islam in Pakistan are common, often motivated by personal vendettas or religious hatred. The highly inflammatory accusations have the potential to spark mob lynchings, vigilante murders and mass protests.

The government’s failure to curb the misuse of the blasphemy laws is emboldening false accusers, rights activists and church leaders say.

Protestant Church of Pakistan President Azad Marshall welcomed the bail of the two nurses but said a stronger deterrent is necessary; he urged the court to take a holistic view of the case and punish the accusers if the blasphemy allegations prove false.

“We thank the Lord for intervening and will continue to pray for their acquittal from this false case,” Marshall said. “The ordeal that these two Christian women have suffered due to a false allegation is unimaginable. We also share the anguish and pain of all Christians who are languishing in jail dungeons for years on similar charges and pray that our Lord intervenes in their cases too.”

Marshall said that it was time the government realized how such accusations were ruining the lives of people regardless of their religious affiliation.

While punishment for blasphemy ranges from several years in prison to death in Pakistan, a person making a false accusation faces potential punishment of only six months in prison or a fine of 1,000 rupees (US$5.71). Successive governments have acknowledged that the blasphemy laws are blatantly misused, but little effort has been made to stop the abuses.

A Senate Special Committee on Human Rights and the Islamabad High Court in 2018 recommended that those making false blasphemy accusations be given the same punishments as those convicted of blasphemy, but the government dismissed the recommendation. It stated that anyone registering a blasphemy case at a police station must bring two witnesses.

Rights activists say it’s unlikely that any government will move to repeal or amend the blasphemy laws due to fierce Islamist sentiments in the Muslim-majority country. They say Pakistani authorities must be urged to immediately implement effective procedural and institutional safeguards at the investigative, prosecutorial and judicial levels to prevent abuse of these laws.

The U.S. State Department in December re-designated Pakistan among nine other “Countries of Particular Concern” for severe violations of religious freedom. Previously Pakistan had been added to the list on Nov. 28, 2018.

Pakistan ranked fifth on Christian support organization Open Doors 2021 World Watch list of the 50 countries where it is most difficult to be a Christian.