Christian to preside over Egyptian Supreme Court for the first time

The government chose Coptic judge Boulos Fahmy as head of the country's top court. Most in the Muslim community welcome the appointment. 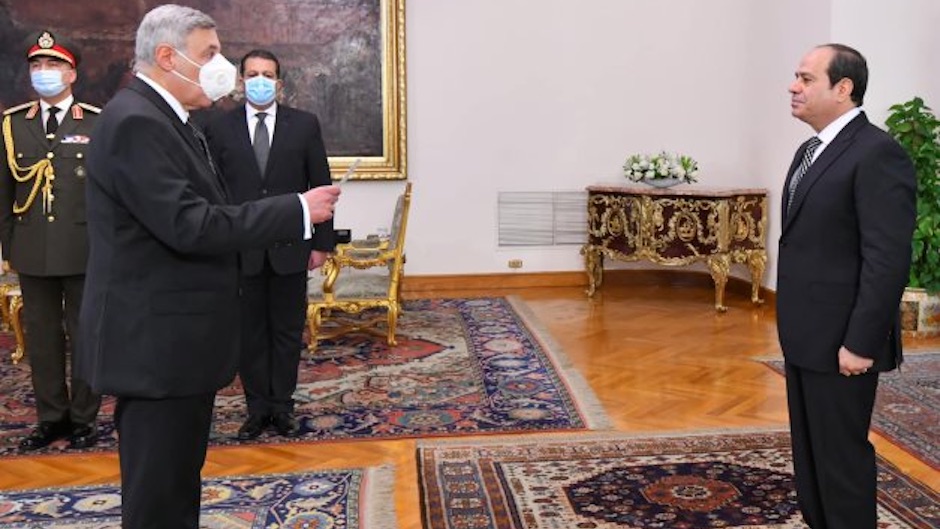 Fahmy (left) is sworn in by President El-Sisi / Egypt Today via ED.

Fahmy, who is 65 and the first Christian to hold that position, was chosen by Fatah el-Sisi from among the five senior judges on the 15-member court, as required by law.

The Christian judge succeeds Judge Saeed Marei, who, according to Mohammed Bassal, an Egyptian legal expert and editor of the newspaper Shorouk, has resigned due to health reasons.

Fahmy has been head of the court's General Secretariat since 2014. His appointment has been welcomed by many in the country's Muslim majority.

Moushira Khattab, head of the National Council for Human Rights, has described the decision as “historic” in the field of civil and political rights.

However, Ishak Ibrahim, an expert on Christian issues in Egypt, pointed out in a social media message that “it will not have a significant impact on eliminating discrimination and ensuring the opportunity for all citizens with justice and equality”.

“We will be able to say there is a significant improvement when we find the percentage (of Christians holding posts) has moved from around 2% to a percentage close to their numerical one”, he added.

Christians, who make up almost 10% of Egypt's 102 million people, have long complained of discrimination by the country's Muslim majority.

Since el-Sisi became president in 2014, most Christians have seen him as an ally and protector against Islamists. He often attends Orthodox Christian worship at Christmas as a sign of support for the Copts.

El-Sisi has taken other steps to empower Christians, such as appointing the first Coptic Christian woman as regional governor in 2018.

He has also allowed the building of churches across the country, after decades of restrictions.

Published in: Evangelical Focus - world - Christian to preside over Egyptian Supreme Court for the first time