‘Smile, you are in Guatemala, pro-life capital of Latin America’

The Guatemalan government celebrates a solemn act in the National Palace for the declaration of the country as Pro-Life Capital, with national and Latin American leaders. 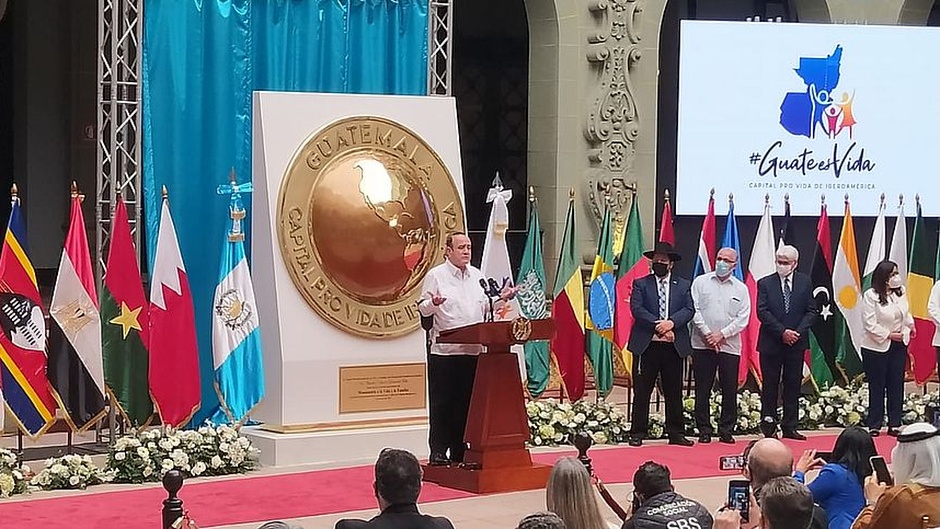 On 9 March, Guatemala was declared the Pro-Life Capital of Ibero-America, in a special event in which the government of the country also instituted the Day for Life and Family, and inaugurated a monument in what from now on will be called the Patio of Life of the famous National Palace of Culture.

The designation came a day after the Guatemalan Congress passed the Law for the Protection of Life and the Family, which seeks to protect life, the natural family and the institution of marriage between man and woman.

The first part of the ceremony took place in the Constitution Square, in front of the National Palace of Culture, and was attended by Guatemala's President, Alejandro Giammattei, as well as his government cabinet, nearly other 300 politicians (ministers, senators, parliamentarians and leaders from almost all the countries of the American continent). Representatives from 23 countries of the Ibero-American Congress for Life and the Family were also attending the event.

“Smile, you are in Guatemala, the Pro-life Capital of Ibero-America”, told the audience Aarón Lara, President of the Ibero-American Congress for Life and the Family. The evangelical entity working in the sphere of politics granted this recognition to the country.

“This day marks a before and after, because we are witnesses to a prophecy that announced that Guatemala would be a beacon of light to the nations, because it takes the lead in the defence of life in a direct, courageous and decisive way, which is why this country is an example to the world”, he added.

Lara explained that in recent years some countries on the continent have opted to “name the bad good and the good bad. Even international organisations put pressure on governments to introduce policies according to a gender ideology that is not in accordance with our cultures and faith”.

According to the President of the Ibero-American Congress for Life and the Family, “it takes great courage to defend life from the presidency and great integrity of character to work in favour of the family as the basis of our society”.

He pointed out that that is why the Ibero-American Congress decided to name Guatemala the Pro-Life Capital of Ibero-America, and to give them the gift of a sculpture called “Guatemala, light of nations”, which will remain in the Guatemalan National Palace.

“Mr. President, there are ideals for which it is worth risking the life, and this is one of them, your legacy will transcend the world”, stressed Lara.

President Giammattei and around 200 guests then went to the National Palace of Culture for the inauguration of the monument.

The first speech was given by the Guatemalan ambassador to the United Nations, Luis Lam, an evangelical Christian, who described the event as a celebration and thanked the Ibero-American Congress for Life and the Family for “the important role it plays as an organisation in the defence of life and the rights of families”.

He said that this designation came after the launch of Public Policy for the Protection of Life and the Institutionality of the Family by the Giammattei government in July 2021. “It is a project that the president took as a priority and that unified 99 government programmes in a joint effort”.

Lam recalled that Guatemala joined the Geneva Consensus, which states that abortion is not a human right and that the family is the foundation of society under a natural and biological concept.

“We are a beautiful and small country, but big in the heart of God, with a mission and mandate received in the form of a promise, to be a country of light to the nations. It is a new time in Guatemala, a beautiful light is shining that will illuminate our generations”, said the Guatemalan ambassador to the United Nations.

A light to the nations

Shirley Rivera, president of the Congress of the Republic, read in her speech the decree containing the Law for the Protection of Life and the Family, and pointed out that “the eyes of the world will be on Guatemala”.

She added that the country will be an example of how the nation has been lifted out of poverty and how it has created wealth, because “Guatemala, like its citizens, will be a rich nation”.

The Minister of Culture and Sports, Felipe Aguilar, read the ministerial agreement with which the patio located in the east wing of the first level of the National Palace of Culture will be called “Patio of Life”. The decree also states that every 9 March will be commemorated as the Day for Life and the Family.

Claudia Ruiz Casasola, Minister of Education, stressed that the family is the main educational institution, which is why there are policies to strengthen it as the basis of a healthy society. “I am sure that many nations will want to follow the path we have taken”, she said.

President Giammattei called on Guatemalans to unite to protect life from conception to natural death.

“We are a country that respects dissidents, that listens to those who protest, but we also ask everyone that instead of protesting, we unite to build that different Guatemala that we all want”, the President said.

The Roman Catholic Apostolic Nuncio Francisco Montecillo said in his speech that this declaration means Guatemala's commitment to defend the existence of the family, founded on marriage, which, according to Pope Benedict XVI, is the heritage of humanity.

“Being pro-life is not just being against abortion or euthanasia, although it does imply it, it is defending life, it is promoting life, with dignity for all human beings”, said the Roman Catholic Metropolitan Archbishop, Gonzalo de Villa.

Meanwhile, Mohamed Shalia, leader of the Muslim community in Guatemala, pointed out that the family is the heart of the community. “God created the family so that individuals can grow up in a healthy and safe environment. It is there that we learn kindness, mercy and compassion”.

Finally, Rabbi David Rushek, stressed that a light of hope and life was lit for those who cannot yet speak.

After the speeches, a group of children accompanied the President of Guatemala to inaugurate the monument to life, to close the ceremony.

Two metres high, in polished bronze and on a white base, a map of the world can be seen, where Guatemala has a shining light, representing that it is a light to other nations. At the top it reads “Guatemala” and at the bottom “Pro-Life Capital of Latin America”.

The attendees placed white roses at the foot of the monument, as a symbol of the innocent lives that will benefit from the newly approved policies.

Published in: Evangelical Focus - world - ‘Smile, you are in Guatemala, pro-life capital of Latin America’