Dozens killed in attack on Catholic church in Nigeria

A bomb and gun attack left more than 70 victims during a mass in the southwest of the country. 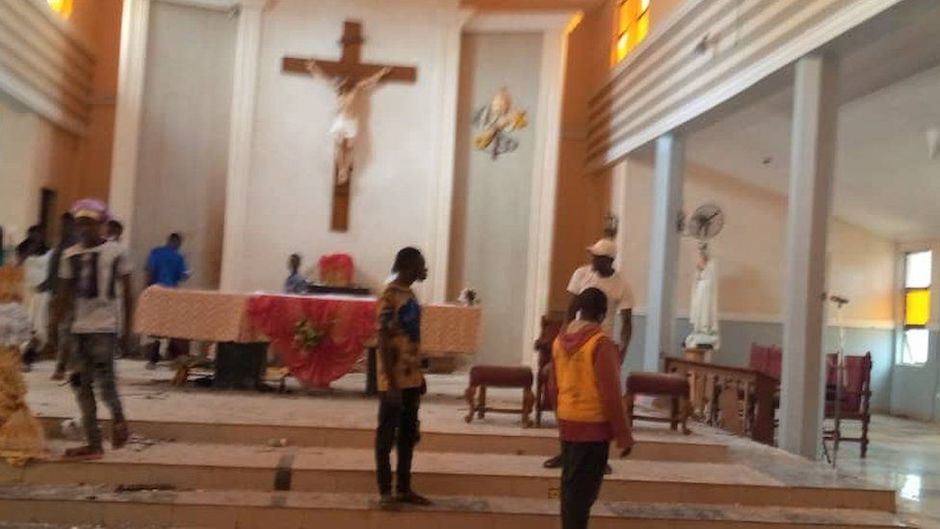 St Francis Xavier Catholic Church in Owo, after the attack on Sunday. / Image via BBC.

Terrorists launched a gun and bomb attack at the end of a Catholic mass in southwest Nigeria on Sunday (June 5), killing an estimated 70 worshippers, sources said.

A priest at the church, the Rev. Andrew Abayomi, told Morning Star News that as the worship service was coming to an end, the terrorists threw explosive devices on the church building and shot at worshippers.

“We were in worship mass when the terrorists attacked us. They shot at the congregation while breaking into the church by throwing Improvised Explosive Devices (IEDs) at the church building,” Abayomi said. “Some of us hid inside the church as they shot randomly at us. This lasted for about 20 minutes before they retreated.”

He said it was difficult to give details about the number killed and injured, as leaders were focusing on transferring the wounded to hospitals.

Owo legislative representative Adelegbe Timileyin told the AP that another priest at the church was abducted in the attack.

Among other Owo residents, Loye Owolemi, said about 70 worshipers were shot dead and others abducted when terrorists attacked the church service.

“Today is a black day in Owo town in Ondo state, as about 70 Christians were killed during an attack on a Catholic Church,” another Owo resident, Augustine Aluko, told Morning Star News. “The Christian victims were killed as they were in worship service.”

Ondo Governor Arakunrin Oluwarotimi Akeredolu, said it was a “black Sunday” in Owo.

“Our hearts are heavy. Our peace and tranquility have been attacked by the enemies of the people,” Akeredolu said in press statement.

“This is a personal loss, an attack on our dear state…I am shocked to say the least. Nevertheless, we shall commit every available resource to hunt down these assailants and make them pay. We shall never bow to the machinations of heartless elements in our resolves to rid our state of criminals.”

While no one immediately took responsibility for the assault, predominantly Muslim Fulani herdsmen were suspected. They have committed kidnapping and killings primarily in northern Nigeria but have been increasingly active in otherwise peaceful Ondo state, prompting the state government to implement recent restrictions on grazing.

Adeyemi Olayemi, a lawmaker in Ondo, told reporters that Fulani terrorists were suspected as they were likely retaliating for grazing restrictions implemented in response to an uptick in kidnappings in the state.

“We have enjoyed improved security since herdsmen were driven away from our forests by this administration,” Olayemi reportedly said. “This is a reprisal attack to send a diabolical message to the governor.”

“No matter what, this country shall never give in to evil and wicked people, and darkness will never overcome light,” Buhari said. “Nigeria will eventually win.”

In the 2022 World Watch List of the countries where it is most difficult to be a Christian, Nigeria jumped to seventh place, its highest ranking ever, from No. 9 the previous year.

1
10 differences between Martin Luther and John Calvin
2
Pre-Millennialism, Post-Millennialism or Amillennialism?
3
Funeral of Elizabeth II: “The Queen’s service had its foundation in her following Christ, God himself”
4
Brother Andrew, founder of Open Doors dies (1928-2022)
5
The ‘Imprisoned Spirits’ of 1 Peter 3:19-20
AREOPAGO PROTESTANTE uses “COOKIES” in order to guarantee the proper functioning of our website, improve its security, obtain better efficiency and personalisation, collect statistical data and show you relevant advertising. Click “OK” to authorise its use . If you reject the use of “cookies”, AREOPAGO PROTESTANTE cannot guarantee the functionality of the website. Learn more about our COOKIES POLICY at the bottom of the page.