A gunmen on a motorcycle opened fire outside Marmina church and nearby shop. More than 100 Christians have been killed in Egypt in the past year. 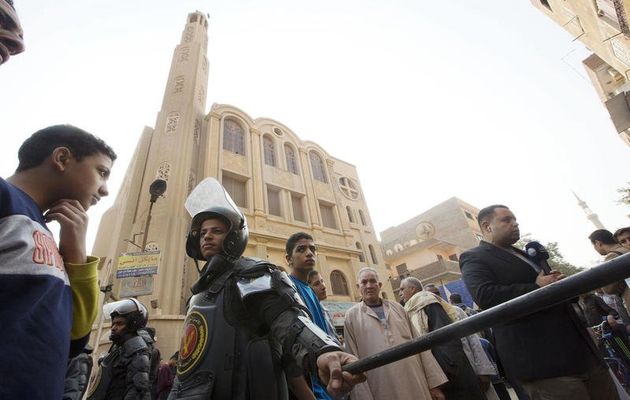 The attack happened at the Marmina church in the Helwan City district . / AP

At least nine people were killed in twin attacks on Coptic Christians, south of Cairo, the interior ministry says.

The attack happened at the Marmina church in the Helwan City district on the capital’s southern outskirts.

The dead include members of the congregation and a police officer killed in a shootout at the security post guarding the building. Several others were wounded.

KNOWN BY THE POLICE

According to the interior ministry statement, the attacker headed to the church, where he attempted "to trespass the church's perimeter security".

He also had an explosive device and a machine gun. "The security forces have dealt with the attacker and managed to arrest him after he was injured", the ministry said.

The ministry suggested he was known to security services, saying he was "one of the most active terrorist elements and he carried out several terrorist attacks which resulted in the martyrdom of a number of policemen and civilians".

The Coptic Orthodox church released a statement confirming the attack. “A terrorist attack has targeted the Church of the Martyr Marmina as unknown assailants fired gunshots, killing a person from the security force guarding the church as well as five of the people of the church, in addition to other injured individuals”, it said.

Egypt's Copts have in the past accused authorities of only token gestures to protect them.

Egypt is a Muslim-majority country and its Christian minority - mostly members of the Coptic Orthodox Church - make up around 10% of the population.

Last April at least 45 people died in twin attacks on Coptic churches in Alexandria and the Nile Delta city of Tanta.

At least 29 Copts were killed on a bus en route to a monastery in central Egypt in May and a Coptic Orthodox priest was stabbed to death in Cairo in October.

More than 100 Christians have been killed in Egypt in the past year. Most of the attacks have been blamed on, and in many cases claimed by, Islamists affiliated with Daesh.