“The state shall not establish an official religion. No citizen shall be discriminated based on their religion”, the new agreement between the government and the rebels says. 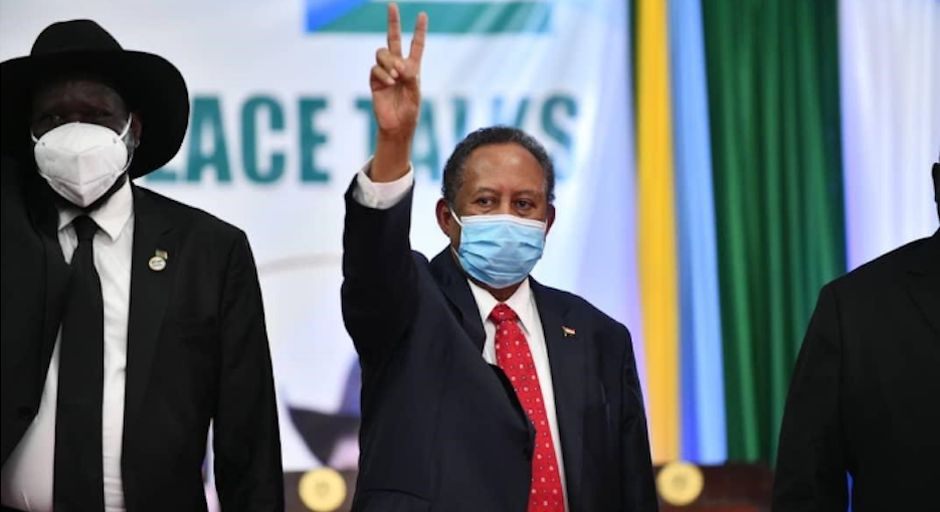 Prime Minister of Sudan, Abdullah Hamdok and the President of South Sudan, Salva Kiir, (left), after signing the agreement that ends the official status of the Islamic religion./ Twitter Memri Spanish.

The political transition in Sudan, after the fall of Omar al Bashir, continues to develop its program of recoverring the rights and freedoms that were seized during the dictatorship.

If in mid-July the government announced the elimination of the death penalty for the crime of apostasy, it has now removed Islam as state religion. The decision was made public during the peace negotiations between the government and the rebel groups.

The agreement has had two phases. The first was signed in Juba, the capital of South Sudan, on August 31, between the vice president of the Sovereign Council of Sudan, the provisional government, Mohamed Hamdan Dagalo, and representatives of the Sudan Revolutionary Front, an alliance that brings together 17 armed groups from the Darfur and South Kordofan regions.

Among the protocols included in the Juba document, is the creation of a commission for religious freedom that guarantees the rights of Christian communities in the southern regions of Sudan.

But some rebel factions were not present in the the signing. Therefore, Sudanese Prime Minister, Abdullah Hamdok, had to sign a new separate agreement with the leader of the Sudan People's Liberation Movement-North (SPLM-N), Abdelaziz al Hilu, in Addis Ababa.

This second document contemplates the elimination of Islam as the official religion of Sudan, a measure imposed 30 years ago by al Bashir.

“No citizen shall be discriminated against based on their religion”

“For Sudan to become a democratic country where the rights of all citizens are enshrined, the constitution should be based on the principle of ‘separation of religion and state’, in the absence of which the right to self-determination must be respected”, the document states.

It adds that “freedom of belief and worship and religious practice shall be guaranteed in full to all Sudanese citizens. The state shall not establish an official religion. No citizen shall be discriminated against based on their religion”.

The United States Commission on International Religious Freedom (USCIRF) was one of the first entities that applauded this decision, because “it will further promote the freedom of religion and belief in the nation. We encourage Sudanese Prime Minister Abdalla Hamdock to continue on this path of progress”.

Sudanese religious leaders are also satisfied with the agreement. “People here prefer to be cautious, but the peace agreement covers a large part of Sudan and it is very important that a signature has finally been reached. We are all very happy”, Tombe Trille, Bishop of El Obeid, capital of northern Kordofan, underlined.

Despite progressive advances in human rights, such as religious freedom, different international organizations assure that Sudan continues to have duties to fulfill.

The USCIRF pointed out that “bureaucracy has held up promised compensation claims for churches destroyed or confiscated during Bashir’s reign, who wanted to turn the country into the vanguard of the Islamic world” .

Furthermore, it called for full repeal of the blasphemy law, which, although it has eliminated the death penalty, continues to maintain the possibility of sentencing a person to six months in prison.

The entity also urged to ”reform the Islamist vestiges in the judiciary and Ministry of Education”.

Christianity Today has reported that Sudan will not introduce Christianity into the school curriculum for the first time next year.

Sudan ranks seventh in the 2020 Open Doors World Watch List. With a population of over 42 million people, the country has approximately two million Christians.