The "alliance", led by Pope Francis and "Guardian" leaders of large multinationals, represents 500 companies with 200 million workers around the world. 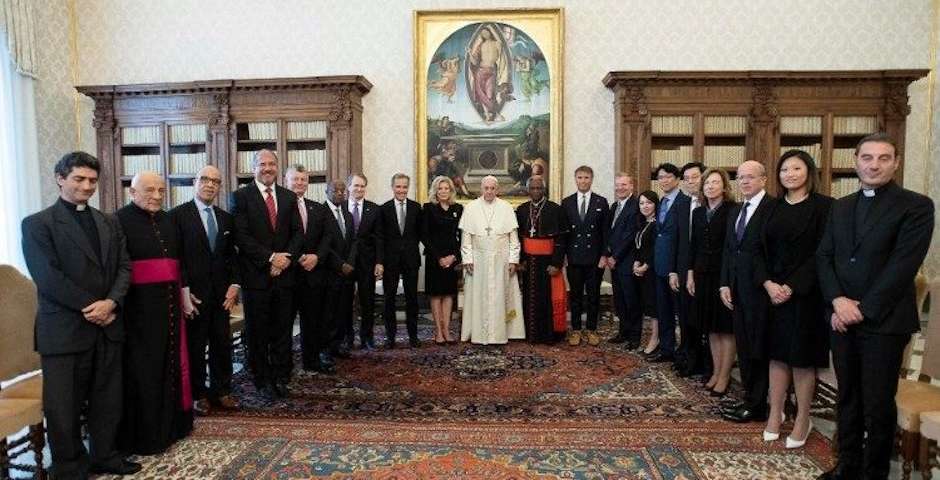 Members of the Council for Inclusive Capitalism, with Pope Francis. / CFIC

Reforming the economic system to make it more equitable and sustainable. This is how the raison d’être of the Council of Inclusive Capitalism can be summarised.

The Vatican has joined this platform formed by leaders of some of the biggest multinational corporations such as Visa, Johnson&Johnson, BP, Allianz and Bank of America, as well as foundations and large global non-profit organisations.

The Council defines itself as an “partnership” and “alliance” that “signifies the urgency of joining moral and market imperatives to reform capitalism into a powerful force for the good of humanity”.

In fact, Pope Francis stands out among the main leaders of the initiative, alongside Roman Catholic Cardinal Prefect of the Dicastery for the Promotion of Integral Human Development Peter Turkson, and a group of influential business leaders who call themselves “Guardians”.

According to the initiative, these Guardians coming from different businesses “have already committed to hundreds of measurable actions”.

The Council is formed by around 500 companies, which together represent 10.5 trillion dollars in assets under management and 200 million workers in over 163 countries.

“This Council will follow the warning from Pope Francis to listen to ‘the cry of the earth and the cry of the poor’ and answer society’s demands for a more equitable and sustainable model of growth”, said the founder of the Council, Lynn Forester de Rotschild.

In 2013, Francis stared in the document Evangeli Gaudium, that “the market, by itself, cannot solve all problems”. Now, the highest representative of the Vatican, whose debt has been controversial to the point that some analysts say the institution is close to bankruptcy, is defined by the Council of Inclusive Capitalism as their “moral guide”.

“An economic system that is fair, trustworthy, and capable of addressing the most profound challenges facing humanity and our planet is urgently needed. You have taken up the challenge by seeking ways to make capitalism become a more inclusive instrument for integral human wellbeing”, the Pope told the Guardians.

The Council say it is “inspired by the moral imperative of all faiths” and invites other businesses and non-profit organisation to join the “moral guide of Pope Francis”.

The alliance will have one annual meeting between the Guardians and the Vatican representatives Francis and Cardinal Turkson.

Published in: Evangelical Focus - world - The Vatican joins some of the largest fortunes to promote a “reform” of capitalism