The LGBT lobby in Castellón (Spain) asks the administration to “take actions” against the evangelical church and its social projects. The Spanish Evangelical Alliance condemns the “coercion” of freedom of speech. 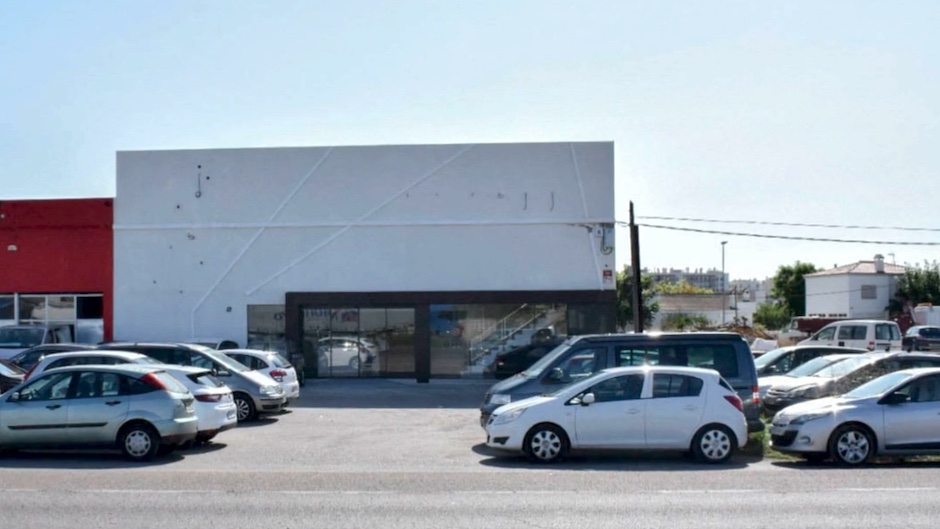 The worship place of the La Roca church in Vinaroz, Spain.

An evangelical church in the region of Castellón (East of Spain) cancelled a series of worskshops on family and sexuality after the LGBT lobby in the region denounced in the media the church’s alleged “LGBTphobia”.

The La Roca (The Rock) church in the town of Vinaroz, known for its experienced work supporting marginalised people, was denounced in the Spanish national newspaper El Mundo by the group Castelló LGBTI, whose spokesperson said the planned talks “go against the LGBT and trans laws in our region”, referring to legislation implemented in recent years to defend LGBT people.

The group also claimed it had discovered alleged “LGBTphobic and machoist quotes” in preachings uploaded by the church on its audiovisual platforms.

The views expressed by the church, the LGBT group said, “cannot be consented because hate speech, is not only a social scourge but a prelude to crimes”. Castelló LGBTI went on to say that they bring the church and its associations to the regional authorities so that “the needed actions are taken” by the administration. The regional legislation include fines of up to 120,000 euros, as well as the loss of state grants for organisations that violate LGBT rights. 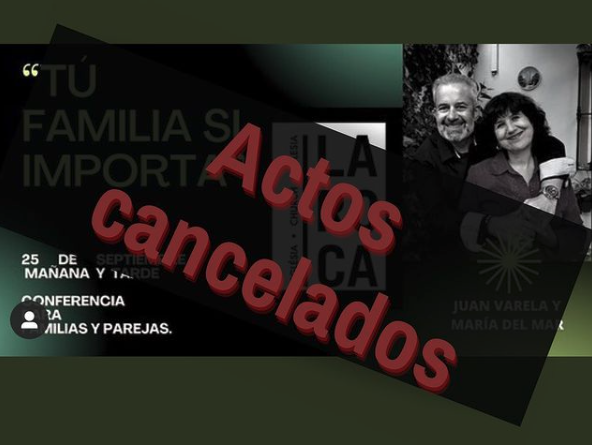 The church announced on social media that it had cancelled the workshops on family and sexuality.

After the unexpected backlash, the leadership of La Roca Vinaroz decided to cancel the workshops, which specificllay addressed the topics of education, responsible parenthood and sexual identity, and were initially planned to be addressed by two invited speakers in a church setting.

The church made clear that “what moves us is not hate or sectarianism but two great commandments for all Christians: loving God and loving our neighbour as ourselves”, adding that the Christian community is “well known in Vinaroz” for their social justice action in areas such as food distribution and drug addiction rehabilitation.

They lamented that anyone was offended by the activities and defended their Christian view of marriage, “a heterosexual, monogamic and permanent union”. This “may not be accepted by all in our society today” but “we do respect the freedom of our fellow citizens of expressing their opinions, spread their ideas and teach them”, and “we also defend the same right and respect for all, including for this church”.

La Roca church has good relationship with other evangelical communities in the Castellón region and across Spain, and sought the support of other organisations in handling the unexpected conflict.

Among them, was the Spanish Evangelical Alliance (AEE), which defended the fundamental freedoms of speech, worship and religion, calling the pressure on the church in Vinaroz  “authoritarian” and “undemocratic”. 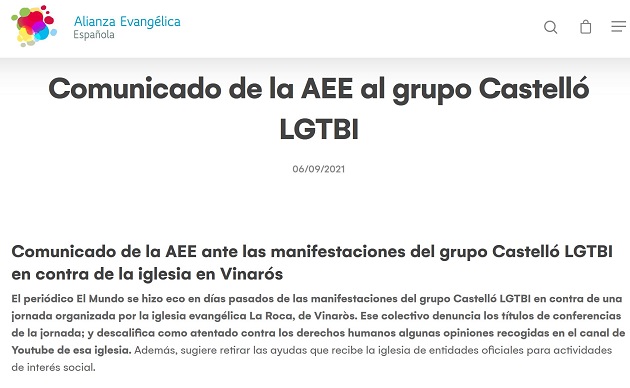 Statement of the Spanish Evangelical Alliance in defense of the evangelical church in Vinaroz.

Accusing Christians of “hate speech” should not be used to silence “those who simply have different”. The LGBT group, in trying to intimidate the church, acts with “dogmatism, disregard for fundamental rights”, the AEE says in a statement, “all of which has nothing to do with progress, and an open and tolerant society”.

“It is nothing new” that evangelicals are accused of being “heretics” and a “social scourge”, the AEE reminds, since in other historical contexts the ethics of Spanish evangelicals was also seen as problematic by “those in power”.

“Disagreeing with on how sexuality is understood in no case means no longer respecting others (…) Relationships in society become very conflictive if this basic principle is not understood”, they add addressing the issue of tolerance.

“Ideas are contrasted with ideas, and cannot be crushed with threats and coercion”, the oldest evangelical organisation in Spain added. It called on all citizens to not let “fear” restrict their right to openly speak, adding that such pressure campaigns against churches are “not a threat to the freedom of thought and of expression of the evangelical community, but a threat to the freedoms of everyone”.

Published in: Evangelical Focus - cities - Church accused of “LGBTphobia” in the media for organising workshop on family and sexuality