The Protestant Reformation started 499 years ago

Many celebrate #ReformationDay worldwide. Martin Luther was not aware of how his 95 theses would change Germany and the rest of Europe. 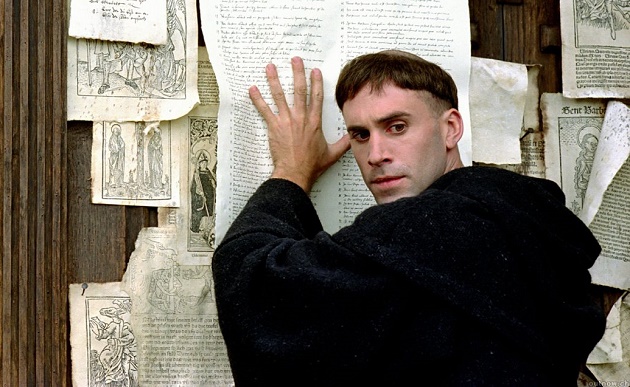 Luther and his 95 theses, as seen in the film featuring Joseph Fiennes.

On October 31, 1517, the eve of All Saints' Day feast, Martin Luther publicly announced his theses. The date has marked the beginning of the Protestant Reformation.

For some, Luther is the ogre who destroyed the unity of the Church, the beast that trod the Lord's vineyard, a renegade monk who devoted himself to destroy the foundations of monastic life.

For others, he was a corageous man who obeyed God's Word and helped many Christians to understand the gospel of Jesus Christ; the reformer of a corrupt Church.

Luther changed the course of history by challenging the power of the papacy and the empire, holding views against the practice and ordinances of the established religion, Roman Catholicism. He did this by teaching the evangelical doctrine of salvation by grace alone.

The spark that moved the monk probably started in 1515, when Luther began to lecture on the Epistle to the Romans. He later said that answers to his personal questions in the 1st chapter of that book.

According to his own account, the discovery of the meaning of the phrase "the just shall live by faith" was preceded by a long struggle and bitter anguish. Romans 1:17 starts by saying: "In the gospel, the righteousness of God is revealed". Luther was meditating day and night on how these two parts of the verse would make sense togethers.

The answer he fund was surprising. The "righteousness of God" does not refer to the fact that God punishes sinners, as traditional theology told. The verse actually means that the "justice" of the righteous does not come from his works, but from God.

The "righteousness of God" is received by faith, not because someone is fair or meets the demands of divine justice, but because God gives that gift fro free. Both faith and justification of the sinner come from God as a free gift.

Luther explained: "I felt I was born again and that the gates of Paradise had been opened for me. All Scriptures had a new meaning. And from then on, the sentence 'God's justice' did not fill my head with hate, but it became unspeakably sweet".

Luther seems to have been a relatively quiet man, dedicated to his studies and his spiritual life. His great discovery of God's Grace gave him a new understanding of the gospel, but it did not lead him immediately to protest against the way the Roman Church was preaching the Christian faith.

On the contrary, the monk continued his teaching and pastoral work in Wittenberg.

When he finally decided it was time to launch his challenge, he wrote a theological dispute in ninety-five theses, which he thought would help to open an academic debate. In this document, Luther attacked several of the fundamental principles of scholastic theology and hoped to open a debate to make his discovery known.

The controversy became much greater than what Luther expected. By attacking John Teztel's sale of indulgences in Germany, Luther had dared, even unknowingly, to oppose the profit and the designs of some who were much more powerful than him.

According to Luther, if it is true that the Pope has the power to take the souls out of purgatory then he should do that for free, not as a means to build a church in Rome (thesis 82). Although many in Germany and other places agreed with Luther, the selling of indulgences continued.

Luther also claimed that the Word of God is the starting point and the final authority of the Church and of all theology.

Most historians agree that Luther sent his theses to the Archbishop of Mainz, the Pope, some friends and to other universities at that time. However, the theses were printed very soon, and before 1518 had been widely read throughout Europe.

Luther discussed his ideas with theologians who supported the doctrines of Rome. The 95 theses were finally sentenced on 15 June 1520 by the Bull Exsurge Domine of Pope Leo X. Openly in conflict with the Roman Catholic Church, Luther was excommunicated early next year.

The Pope demanded that Luther would retract his theses, but the German monk rejected this demand publicly in the Diet of Worms in 1521, clearly challenging the authority not only of the Pope but also of Emperor Charles V.

The Protestant Reformation had just began.