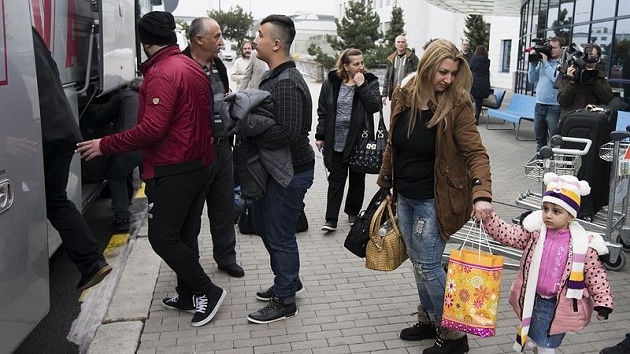 The arrival of some of the Iraqi refugees in February. / Pravo

Twenty five Iraqi Christians have abused Czech generosity by moving to Germany after they had joined a relocation programme,  Interior Minister Milan Chovanec said. Therefore, they should be sent back to Iraq.

THEY COULD STAY IN GERMANY

Later it appeared all 25 refugees will stay in Germany where they filed a request for asylum, citing family ties. Minister Chovanec wants Berlin to explain this. He also said he wants a legal analysis as the refugees applied for asylum in the Czech Republic already.

They should be returned to the Czech Republic, he argued. “The fact that a group of people, relocated by the Czech Republic, within the common EU resettlement, are allowed by the German partners to apply again for asylum on their territory, confirms the absurdity of the mandatory quotas.”

Last December the Czech Republic agreed on accepting 153 Iraqi Christians who had left areas controlled by Daesh (Islamic State). So far, 89 of them have arrived in the Czech Republic. The relocation programme is carried out by the Christian organisation Generace 21.

The move of the 25 refugees was also an unpleasant surprise to Generace 21, the Christian group that worked to bring the Iraqi refugees to the Czech Republic. Although it may seem that the refugees took advantage of the endowment of Gen 21, the organisation also understands them.

GEN 21: A THIRD PARTY MAY HAVE PERSUADED THEM TO LEAVE

Novinky.cz published an interview with the organisation’s spokesman Martin Frýdl and project coordinator Jan Talafant. They both said the group had not planned this move beforehand, because in the past weeks they were very diligent in learning Czech.

They suspect a third party persuaded them to try their luck in Germany where they might have a better life than in the Czech Republic. When asked about  who persuaded them to go to Germany Jan Talafant, the project coordinator, said he did not know.

“We know the refugees have a translator at their disposal and they also talked about a foreign lawyer who allegedly said the refugees shouldn’t be afraid to go to Germany or Sweden.”

Talafant also said it was a very risky move for them to do it this way. “If they had waited for only two more months they would have had a permanent residence and refugee travel documents so they could travel legally and not being caught at the border or lose their asylum.”

Asked whether Gen 21 considered the possibility of the refugees leaving the country and thus violating their agreement with the Czech government, Talafant answered: “We knew it was a risk but we thought they would stay here. I hadn’t expected this either and I regret it. But I also want them to thrive. I look at the children who didn’t have a voice in all this. They have a chance to live a new life.”

To the question whether the departure of the group was disappointing, Talafant answered that it really was a disappointment he is trying to process. On the other hand, the goal was to rescue these refugees and bring them to the Czech Republic. If they live in Germany they also will be safe, so their goal is at least reached partially.

President Zeman tweeted: “If you don’t like it here, then go away”, making it clear that the case is closed for the politicians.