Giorgia Meloni says she will try to restore the country’s pride. She opposes gender ideology, liberal abortion laws, and has a hard stance on immigration. 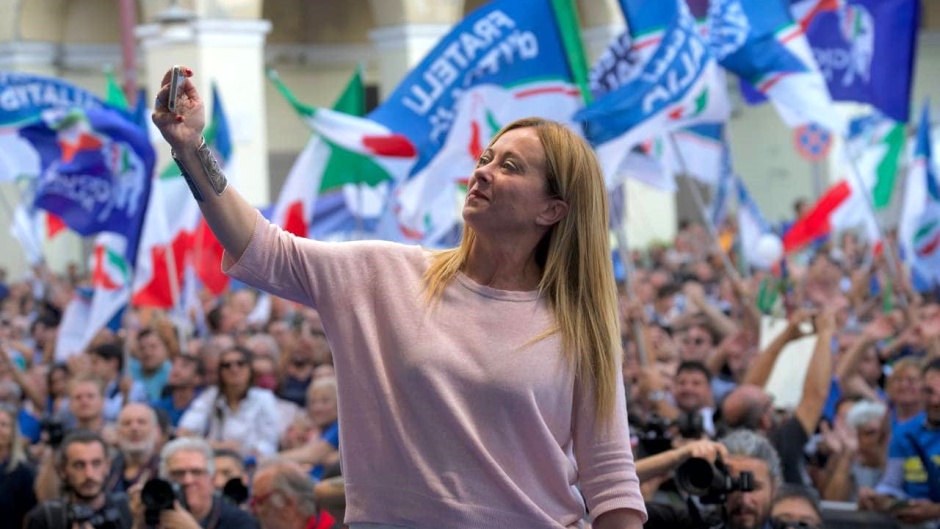 Giorgia Meloni, leader of the Brothers of Italy and future Prime Minister, in a political rally, September 2022. / Facebook Giorgia Meloni.

Giorgia Meloni is expected to become the first female Prime Minister of Italy, after winning the parliamentary elections.

The leader of Fratelli d’Italia (Brothers of Italy, a name taken from the national anthem) received the strongest support with 26.1% of the vote. The election was shadowed by the lowest turnout in history (64%, down from 73% in 2018, which was also a record low). This is seen as a sign of the fatigue of the Italian population with its political elite, with 6 different governments in the last 10 years.

In this slap election after the collapse of Mario Draghi’s techonocratic government in July, Meloni’s partners in her hard right-wing coalition (former Interior Minister Matteo Salvini and former Prime Minister Silvio Berlusconi) had bad results getting both around 8% of the vote. Nevertheless, the three will have a majority in parliament (around 240 of 400).

The Social Democratic PD of former Prime Minister Enrico Letta came second with a disappointing 19%, followed on the third spot by the Five Star movement of Giuseppe Conte with 15%.

Meloni’s party has been often described by international media as far-right and nationalistic. In her youth she was a militant of neo-fascist movements but she has recently said fascism in Italy belongs to the past. She has government experience as a Youth Minister between 2018 and 2010.

After her victory, she promised to govern “for all Italians with the clear objective of uniting this people”.

The first woman to lead Italy

During the campaign, she focused on burning issues such as the rise of energy costs, unemployment, the “technocratic elites” which imposed the heavy Covid-19 restrictions, illegal immigration, and the progressive ideologies which clash with traditional Christian values. Analysits say her populistic style has helped her connect emotionally with disenchanted voters.

Coming from a low-class neighbourhood in Rome, Meloni explained in her memories that her mother was close to abort her but changed her mind to become a single mother. Herself a mother of a six-year-old girl and pro-life in her narrative, Meloni also opposes gender ideologies.

The next Prime Minister is not married to her partner but defines herself as a Roman Catholic Christian who often fails to attend mass on Sundays. Meloni said she has a strong interest in angels, having many of such images at home and in the offices she works, hoping for protection. She says loyalty and determination in traditional values are the key strengths of a politician.

Brothers of Italy has been clear in its support for Ukraine against the Russian invasion, although its smaller coalition partners (Salvini and Berlusconi) have been often vocal in their admiration for Vladimir Putin.

Giorgia Meloni has also demanded the European Union to respect Italy more although her party is not advocating for leaving the Union. In the continent, Georgia Meloni has built alliances with Hungary’s leader Viktor Orbán, and far-right nationalists Marine Le Pen and Vox in Spain.

Ahead of the election, evangelical leader Giacomo Ciccone lamented the fragmentation in Italian society. He told Evangelical Focus: “Probably Fratelli d'Italia will be electorally rewarded for the linearity and simplicity of their positions in opposition to the other parties’ twisted changes during the last legislature”.

The President of Italy's Evangelical Alliance (AEI) says Christians in the country need to develop an effective socio-political alternative that takes nourishment from the Gospel. Our document "For the good of Italy" (2008), as well as our commitment for religious liberty, family, separation of church and state and social pluralism go in this direction”.