The Spanish Evangelical Alliance, “concerned” about the WEA’s “ecumenical” approach to the Vatican

The World Evangelical Alliance and the Vatican issue a joint document on ‘Scripture and Tradition’ and ‘the Church in Salvation’. 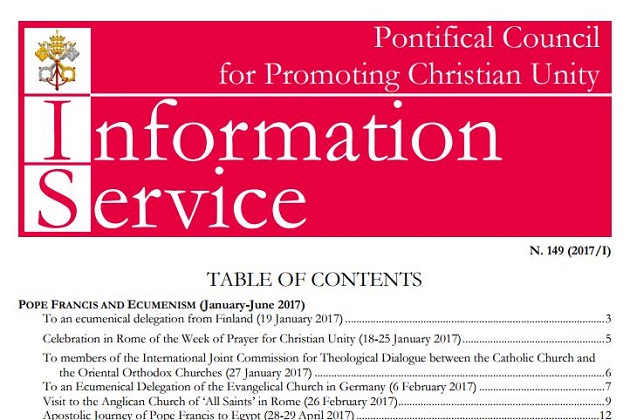 The 2017 (I) bulletin of the Pontifical Council for Promoting Christian Unity.

The Spanish Evangelical Alliance (AEE) has issued a statement on Protestant-Catholic relationships, commenting on “the new era of relations between Protestant churches and the Roman Catholic Church after the election of Pope Francis and the 500th anniversary of the Protestant Reformation”.

The Alliance in Spain said it wanted to clarify its position after both the World Evangelical Alliance (WEA) and the European Evangelical Alliance (EEA) have held meetings with Roman Catholic authorities (some of these with Pope Francis) and issued joint statements, which have been described as an opportunity to put an “end to five centuries of division”.

The latest document produced by the WEA and the Vatican was made public by the Pontifical Council for Promoting Christian Unity is “‘Scripture and Tradition’ and ‘the Church in Salvation’ – Catholics and Evangelicals Explore Challenges and Opportunities. A Report of the International Consultation between the Catholic Church and the World Evangelical Alliance” (see pages 26-45).

Spanish Evangelical Alliance representatives José de Segovia (former head of AEE theological commission) and Jaume Llenas (AEE secretary general) took part in the conversations with Catholic representatives for a period of time, but distanced themselves from the final joint document.

The main concerns laid out by Spanish evangelicals are mainly theological.

COMMON ASPECTS WITH CATHOLICISM, NOT COMMUNION

Accepting that there is a common ground with the Catholic Church in the doctrines related to the persons and attributes of the Triune God, “the Spanish Evangelical Alliance cannot ignore the fact that the Roman Catholic Church continues to maintain fundamental doctrines that are not found in the Scriptures, which led to the division of the Church in the sixteenth century”.

“Not even the well-meaning words of the present Pope have led to the correction of some of the doctrines officially proclaimed in the past that stand between us”, the statement says.

“Sadly, the theology of the Roman Catholic Church has not substantially changed in the last 500 years to correct the doctrinal errors that triggered the Reformation”, and therefore, “the truth can never be subordinated to strategic issues”, the AEE says to those who advocate for ecumenism. The differences between evangelical churches and the Roman Catholic Church are, in many cases, “insurmountable”.

This position, the AEE writes, does not close the door to “ground for common action with the Catholic Church on ethical issues like abortion and other issues of mutual concern such as the persecution of Christians”. It is more, this common social work “can also be possible with other religious or secular organizations and groups”.

The AEE outlines clear points in common with the Roman Catholic Church regarding the Trinitarian basis of the Christian faith; the doctrine of Jesus Christ, whose nature is both completely divine and fully human and the personality; and the divinity of the third person of the Trinity, the Holy Spirit.

THE AUTHORITY IN THE CHURCH

But one of this major concerns for Spanish evangelicals has to do with the question of authority upon which “any theological and practical statement of faith must be defined and evaluated”.

In this sense, it is impossible to accept any authority placed “above the Bible itself”, the AEE says. Examples of these are the Roman Catholic addition of apocryphal or deuterocanonical books (such as Judith or Maccabees) and the “equal or superior authority to that of the Bible” Catholics give to the Tradition and the Magisterium.

According to the AEE, any doctrine that grants or can grant infallibility in doctrinal matters to any human being, be it the Pope or any other person, is incorrect. Evangelicals “cannot accept” the Apostolic succession of Peter in the figure of the Pope, the mandatory celibacy for every Roman Catholic priest; the doctrine of the transformation (transubstantiation) of the wine into blood and bread into flesh; the doctrine of the mass as a continuation or recreation of the sacrifice of Jesus Christ, and the seven Roman Catholic Sacraments.

Those “errors which have been taught in the official documents of the Roman Catholic Church”, the statement says, “must be corrected for the sake of a real ecumenism, with a public rectification”.

The AEE goes on to say that “the Bible clearly reveals that the doctrine of salvation is by grace alone, independent of any work we can do; it is obtained by faith in the final and sufficient sacrifice of our Lord Jesus Christ through His atoning death on the Cross”.

Therefore, “we cannot accept that divine grace is infused or made effective through any sacrament, as it was decided in the Council of Trent”.

“The decisions of this Council are one of the major obstacles to even considering the Roman Catholic Church as an appropriate partner in spiritual matters”.

Another obstacle is the “continued use of indulgences in the Roman Catholic Church”, an issue that triggered “the publication of the 95 theses of Martin Luther”.

Based on the principle that the Bible “clearly teaches that no one is righteous, not even one”, the Spanish Alliance goes on to say tat that no human being (except Jesus Christ) can be exempt from the total corruption inherited because of Adam's sin and extended to all humanity without exception.

“This includes the Virgin Mary who, although she was an example to follow in her life and her faith, she was just a common human being”.

Additionally, the doctrine of the immaculate conception of the Virgin Mary, and her ascension to heaven is “indefensible with the Scriptures”, the document says.

PRAYERS FOR THE DEAD

“The merits of our Lord Jesus Christ are sufficient to guarantee our complete and immediate salvation”, says the AEE.

That is why they “cannot accept any possibility of altering the state of a deceased person, through the prayers of the living or any material or immaterial payment made in his name, or a state called Purgatory, since it is not found in Scripture and is purely fictitious”.

In addition, the Spanish Evanelical Alliance finds no grounds to suport the idea that “prayers to saints or other deceased persons are effective or have been recommended in any way by Christ or the apostles”.

Theological reasons are “not the only ones that prevent the Spanish Evangelical Alliance from accepting the Roman Catholic Church as a Christian church with which to have spiritual communion”.

There have been “500 years of direct persecution, rejection and hostility of the Roman Catholic Church towards the evangelicals in Spain”.

Since the democratic transition after Francoism, “there has been a considerable inequality and injustice between Spanish evangelicals and Catholics”.

The Spanish Catholic Episcopal Conference has not taken steps to change this situation, the AEE denounces, and “insists on maintaining its privileges” in society.

Spanish evangelicals “believe that it would be appropriate and good for the Roman Catholic church to officially express its regret for the crimes committed until the recent past; particularly for the atrocities of the Inquisition, but also for those committed during and after the Spanish Civil War, with the direct and indirect support and consent of the Spanish Catholic Church”.

“Although Pope Francis has shown sympathy not only for Protestants but also for Muslims, Buddhists, Jews and other important world religions”, the AEE says, “it should not be forgotten that Cardinal Ratzinger (later Pope Benedict XVI) in his encyclical Dominus Iesus (2000) denied Protestants the status of churches, describing them in terms of ‘Christian communities’, which he explicitly reaffirmed in 2010 after becoming the Pope”.

Therefore, “we cannot accept the recent statements of Pope Francis against proselytism”, because “we believe above all things in the proclamation of the Gospel of Christ as an inseparable part of His Great Commission, and it is something we will never give up”.

Finally, the Spanish Evangelical Alliance says that “it should not be forgotten that the ‘aggiornamento’ of Pope John XXIII was followed by the papacies of Paul VI and John Paul II”.

“Something similar could happen after the papacy of Francis, who must deal with considerable opposition within the Roman Catholic Church”, the AEE writes.

“As evangelicals, we cannot let our evaluation of the Roman Catholic Church depend on the caprices of the current pope, but we must rely on perceptible and explicit changes, collected in official documents of the Roman Catholic church regarding its theology and its practice”, the text concludes.

Published in: Evangelical Focus - europe - The Spanish Evangelical Alliance, “concerned” about the WEA’s “ecumenical” approach to the Vatican