Russians (including evangelicals) measure their loyalty to Putin

Polls say the President will win again with at least 70% of the vote. Evangelicals hope the state’s efforts to stengthen national unity will not further restrict the freedoms of faith minorities. 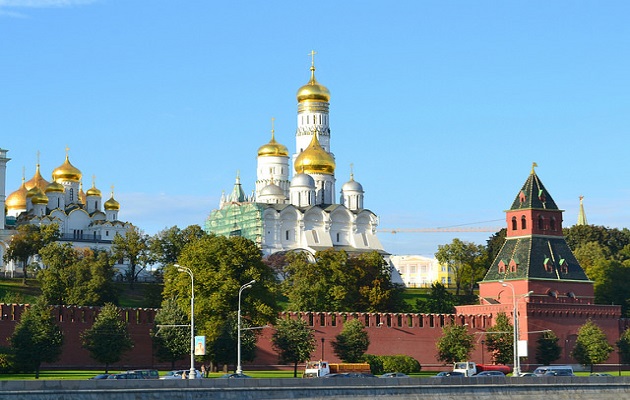 The building of the Kremlin, in Moscow. / Larry Koester (Flickr, CC)

Russia will hold Presidential elections on Sunday 18 March. The vote looks like a mere formality because everyone expects Vladimir Putin to win again.

In Russia's modern history, only Stalin has lead the country for more time than the current President.

Polls say Putin will get around 70% of the votes, and everybody expects him to continue ruling with no serious opposition.

Since 2000, “many evangelicals, maybe most of them, have voted for Vladimir Putin, hoping for a new stage of positive country development”, says the Secretary General of the Russian Evangelical Alliance (REA), Sergey Vdovin.

“After considerable amount of time spent for prayer and thinking of whom to vote for, I have found no any other answer than Putin”, Vdovin tells Spanish news website Protestante Digital and Evangelical Focus.

Vdovin thinks it is difficult to trust other candidates as “able leaders for Russia in the country’s situation right now”. Alternative candidates include Pavel Grudinin, a food insutry businessman leading the Communists, the septuagenarian Vladimir Zhirinovski and the young liberal Ksenia Sobchak, a TV presenter who is against financing religious institutions and that considers the annexation of Crimea is illegal.

“Sobchak would be the candidate most clearly in favour of religious pluralism”, expresses William Yoder, spokesperson for the REA. “But she is a kind of movie star, and will find very little favour among evangelicals”.

Freedom of religion and pluralism have hardly been an issue in this campaign. But the religious minorities (evangelical Christians are less than 1% of the population) know they will depend on the steps the Kremlin takes after the election.

THE PRECEDENT OF THE JHEHOVAH’S WITNESSES BAN

In April 2017, the Russian Supreme Court banned the Jehovah’s Witnesses in the country, after they were labelled as a “dangerous sect”.

Thre are political motivations behind this decision, the Secretary General of the REA says. “Jehovah’s Witnesses are foreign to the Russian soul, which was formed in Byzantine Orthodoxy settings”, a depiction that could as well be applied to Protestants. “By banning them, the state defended itself from the very active brainwashing strategy of what is seen as an enemy ideology. Donald Trump’s invitation, just after the ban, to go to the US, showed that the state was ‘right’”.

In Vdovin’s opinion, “religion and politics go hand-in-hand with one another” in Russia. This means that “if followers of any religious movement become influential, the state immediately will sense a possible threat - and will react”.

The evangelical community in Russia (approximately 1 million people) is also aware of the disputes between Moscow and Washington.

Yoder explains it like this: “Religious freedom for the evangelical minorities is very much dependent on the course of East-West relations. If they get worse, so will relations between evangelicals and the state. The state will be less willing to tolerate diversity, especially with groups deemed to be sponsored by the West. They would increasingly be seen as a fifth column of the West”.

Perhaps this is why most evangelical communities in Russia close ranks with Putin in the midst of a tense context of international relations.

Western countries continue to criticise Russia for its support of Al-Assad in Syria or its relations with Turkey. The poisoning of a former Russian spy in the United Kingdom has also lead to more crossed messages with UK Prime Minister Theresa May.

Yoder adds: “Evangelicals in Russia are viewed very much in light of the Ukrainian situation. Some Pentecostals and Baptists there are seen as leading the fight against Russia. The Baptist Turchinov, now the Ukrainian security chief, is called the “bloody pastor” by Russian media. And not entirely without cause, for he is involved with the extreme-rightest Azov movement”, says Yoder. “Western mission societies are blowing the trumpet in favour of Western, also military, involvement in Ukraine, which of course greatly hurts any of their positive efforts in Russia”, says William Yoder.

“I find this very unwise and short-sighted and the vast majority of Russian evangelicals now distance themselves from such missions. But they, in contrast to the Ukrainians (and me), are reluctant to express their political opinions publically”, he explains.

THE ROLE OF THE RUSSIAN ORTHODOX CHURCH

Respected media outlets such as Le Monde Diplomatique and The Economist have lately published articles analysing what they consider to be a rapprochement between President Putin and the Russian Orthodox Church.

This has been described as a way of reinforcing the national identity against the interferences of the West. Vdovin, says this rapprochement started back in the days of President Boris Yeltsin. What Putin is doing now is only to “continue with that agreement”.

“Since the Russian Orthodox Church has more than 1,000 years of history in this country, for most Russians it is just a part of our DNA. Most will say: ‘We're orthodox’. And it does not matter that most still do not know who Jesus Christ actually is”. In other words, “the ‘informal’ connection between the state and the Moscow Patriarchate is rather strategical for the present course of the country’s development”.

“The state and Moscow Patriarchate of the Russian Orthodox Church will do their best to make a country orthodox with some three to four another minor ‘traditional’ religions”.

“RUSSIA IS NOT LOOKING FOR ONENESS AND UNITY”

The image of the President immersed in icy water to celebrate the Epiphany reminds everyone of the religious reality of the country.

“What Russia is looking for now is not pluralism. It is rather oneness, unity. One clear authority, and one ‘truth’ that will satisfy, first, the state and then, citizens”, says Vdovin.

With its connection with the Orthodox Church, “the state wants to be a standard of morality and purity. So, unless the Lord will change the situation in Russia, there won't be enough possibility for evangelical movement to grow here.

In addition, “we need to be aware that the evangelical movements historically came here from Germany, Great Britain and the United States. These three countries now are not the best friends of Russia”.

Even so, Yoder makes the point that, for example, “the Billy Graham organization remains committed to positive relations with the Russian Orthodox Church”. “The Moscow Patriarchy is trying to become big and strong as quickly as possible. She of course needs the support of the state to do so. But I would not say she is ‘below the heel’ of Putin”, he adds.

THE FUTURE FOR EVANGELICALS

Although Russia has not been included in the 2018 Open Doors World Watch List, the organisation defending persecuted Christians has said the evolution of the country should be followed closely, especially after the ban of the Jehovah’s Witnesses.

“The accounting books and buildings of evangelicals are going through a thorough review by the authorities. There are many cases of fines in the outlying provinces”, Yoder explains.

“But in general, in the large cities, evangelicals do not feel any effect from the Yarovaya Laws. Evangelicals still meet outside of church property almost everywhere; evangelization on a low-key level is still very much possible. But that could change if East-West conditions continue their downward slide”.

“NO SURPRISE, PUTIN WILL WIN”

So, what will happen on Sunday? “No surprises. Putin will win”, says Yoder.

“I think that among evangelicals the percentage of them going to the polls will be less than the national average. But the majority of them will vote for Putin. Russians are not choosy when they vote – they will tend to vote conservatively, for continuity”, he concludes.

Published in: Evangelical Focus - europe - Russians (including evangelicals) measure their loyalty to Putin