‘Main issue is not blessing of gay marriages, but authority of the Bible in the Protestant Church’

CNEF director Clément Diedrichs tells Evangelical Focus: “The bad news became an opportunity to clarify who we are, the evangelical branch inside of Protestantism in France.”

The CNEF is the official representative of most evangelical churches in France. / CNEF logo

One month after the United Protestant Church of France decided to bless homosexual unions, evangelicals in the country are deciding how they will relate to the liberal Protestant churches from now on. Although “it is too early to decide”, said CNEF’s director Clément Diedrichs, it is almost “impossible” to keep the relationship as it was until now.

“It is too early to say anything on that. The next month will be important, and we will see what happens”, told Clément Diedrichs in an interview with Evangelical Focus.

The decision of EPUdF church, which unites Lutherans and old Reformed Protestant churches, has had consequences for the evangelical churches: “After EPUdF’s decision to bless gay marriages, we reacted very fast for two reasons. On one hand, many evangelical churches were shocked by the subject of the decision, and the high percentage of representatives who voted 'yes', 90% of the EPUdF delegates… this was a big surprise.” 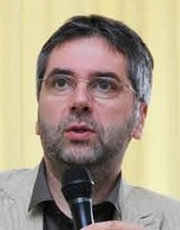 The second reason that led the CNEF to issue a statement clarifying their position in the following days was the fact that “the Media were saying that all French Protestants were now in favor of the blessing of homosexual marriages”. In this sense, argues Diedrichs, “the name ‘United Protestant Church of France’ is ambiguous and the media got confused, so as evangelicals we had to react quickly.”

Diedrichs explains this situation with a personal example, from his own local church: “After the decision of the EPUdF, someone told me ‘I will come to your church service next Sunday, since you now accepted homosexuality’”. He had to explain to that person that his church’s vision had not changed.

DISAGREEMENT INSIDE THE EPUdF CHURCHES

Almost all delegates attenfing to the EPUdF synod in May voted in favor of blessing homosexual unions in their temples, but did the decision of the delegates reflect the reality on the ground? Diedrichs thinks no, and argues: “Many churches do not agree with that decision, and many churches were not adequately represented by their delegates on this topic.”

In fact, “nearly 50 pastors so far have started a movement inside the EPUdF, called ‘Les attestants’, which is saying very clearly that they are against the decision of blessing gay marriages.”

CNEF AND PROTESTANT FEDERATION: WHAT'S NEXT?

The CNEF unites and represents the churches of the Evangelical Federation and the Evangelical Alliance, which fused into one new organisation only 5 years ago. But the CNEF has now the same legal status in front of the French state administrations as the French Protestant Federation has, the Federation being much older (created in 1905).

Bearing in mind that the EPUdF and other liberal Protestant denominations are members of the French Protestant Federation, how will the CNEF interact with the Federation from now on?

Diedrichs insists that “conversations will be held in the next weeks, and nothing can be said so far”, but for the evangelical churches it seems clear that “it will impossible to have the same relationship with this denomination [EPUdF], and with the Protestant Federation.”

Decisions in this stage are not easy, the director of CNEF argues, because “the world is not black and white, there are many grey areas. In this denomination you have pastors who have a clear evangelical faith, and the same happens in the Protestant Federation, you have evangelical churches there. And some of these pastors are really asking the question: ‘Can there be communion with other Protestant churches with these differences?”

In this sense, the branch of evangelical churches who are still members of the Protestant Federation of France issued a critical statement asking this kind of clarifications.

The main obstacle for evangelicals to keep a sense of “communion” with the old Protestant Churches “is not the blessing of gay marriages, but the issue of ‘how they consider the status of the Scriptures’.”

“If you don’t consider the authority Bible, why would there be limits in ethical questions, like homosexuality and others?”, asks Diedrichs.

The Media coverage of the evangelical churches’ statement was very positive, Diedrichs explains. The CNEF clarified a month ago that “among practicing Protestants - those who attend the church and are involved members in their Christian communities-  ¾ of the total are evangelicals.”

It was “a good surprise” that no newspaper came out attacking the evangelical biblical position on marriage. Most newspapers quoted an article written by the Agence France Press (AFP). “The AFP really took what we wrote and just informed clearly. And many newspapers quoted this information”, explains Diedrichs.

So this positive Media coverage was a “real grace”. And the whole situation and public debate helped the evangelical churches to share their opinions in the public space.

“The bad news became an opportunity to clarify who we are, the evangelical branch inside of Protestantism in France”.

THE BALANCE: LOVING EVERYONE AND STILL HOLDING BIBLICAL POSITION

Finally, Diedrichs was asked if it is difficult for evangelicals to explain their position on homosexuality, which combines the love and acceptance of every person and a clear vision on the biblical view of marriage between a man and a woman.

“Yes, every time we say we are against the decision of EPUdF, we also say that we must accept homosexual people in our churches, especially if they are trying to find God.”

“This is something evangelical leaders are telling to their own churches, too”. A clear biblical vision on the practice of homosexuality does need to be accompanied always with “respect for every person”, Diedrichs concludes.

Published in: Evangelical Focus - europe - ‘Main issue is not blessing of gay marriages, but authority of the Bible in the Protestant Church’