‘Freedom of expression needs to be kept, including blasphemous attacks against our faith’, evangelicals say

The brutal decapitation of a teacher near Paris for showing caricatures of Muhammad fuels the debate about radical Islamism in France.

Tens of thousands took the streets in Paris and other French cities to condemn the terrorist attack against a secondary school teacher. / Photo: France TV Info

‘Jes suis prof’ (I am a teacher) was one of the most seen signs in the gatherings that were organised across France on Sunday to condemn the brutal murder of a secondary school teacher.

Samuel Paty, a history teacher of a school north of Paris, had shown caricatures of Muhammad in a class to open a conversation about  the fundamental right of freedom of expression.

On Friday October 16th, a radical Islamist beheaded Paty in the midst of the street. The young man aged 18 year was later killed by the police. The father of a student had called on social media to take actions against the teacher. He and other ten people have been arrested.

“Whatever our political difference might be, we must show unity and demonstrate that we are not afraid of the enemies of the Republic. Unity is the condition for success”, the Minister of Culture said.

Meanwhile, fellow teachers expressed their “deep concern about the impact of social media. The speed with which information is disseminated, and its irreversible aspect, are a real scourge in the exercise of our profession. We claim the right to practice our profession with respect for educational freedom and in complete safety”.

The effort to preserve the French “values” was a central idea in an address of President Emmanuel Macron just two weeks ago. He outlined his plans to “combat Islamic separatism”.

The “extreme hardening” of some Islamic groups in France was forcing the government to prepare new legislation to counter the imposition of “principles that do not conform to the laws of the republic”, the President said. The last terrorist attack seems to strengthen these governmental plans. 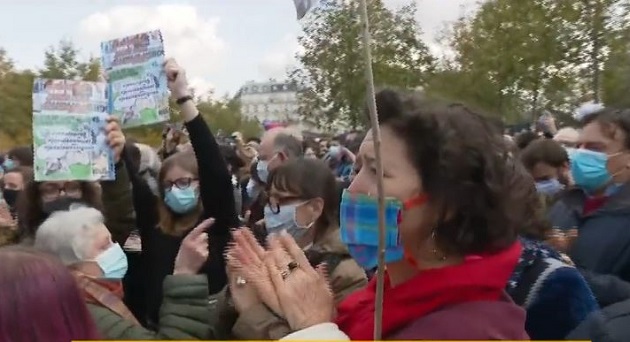 Evangelical Christians are among the many groups who have condemned the murder of the teacher. Romain Choisnet, Director of Communications of the National Council of Evangelicals in France (CNEF) told Evangelical Focus: “We all want our freedom of expression to be maintained, including blasphemous attacks to our faith or opinions”.

This Christian defence of freedom of speech has been backed by campaigns such as Libre de Le Dire, which encourages believers to know their rights and freely express their faith.

Choisnet admitted that such Islamist terrorist acts affect the conversation about the role of religion in society. “The debate is becoming more complex as the ability to peacefully critique Islam is compromised”.

“Some state representatives continue to try linking Salafism and evangelicals”, he laments, “but the fruits of evangelical presence in neighbourhoods are very positive and peaceful”.

In contrast with radical Islam, evangelical churches have the chance to “show how a new and fast-growing religious movement can help the common good and be positive for a city, and a whole country”.

Published in: Evangelical Focus - europe - ‘Freedom of expression needs to be kept, including blasphemous attacks against our faith’, evangelicals say