The Parliament passes the law with a majority of 198 votes. Dozens protested outside. Spain becomes the fourth European country and the sixth in the world to approve euthanasia. 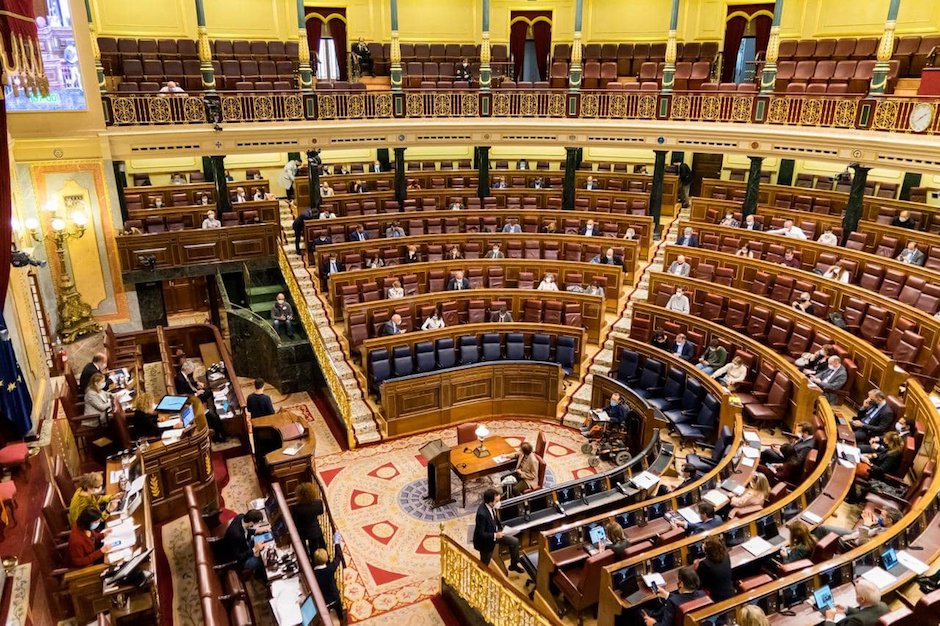 The Spanish Parliament during the session when the euthanasia law was approved . / Twitter @Congreso_Es

The Spanish Parliament has approved the first euthanasia law in the country on 17 December.

The rule, promoted by the Social Democrat government party, PSOE, received 198 votes in favour, 138 against and 2 abstentions. Spain becomes the fourth country in Europe and the sixth worldwide to legalise euthanasia, after the Netherlands, Belgium, Luxembourg, Canada and New Zealand.

The law was approved after several attempts in which the Parliament voted against it. The government coalition of PSOE and leftist party Unidas Podemos, along with the deputies of liberal party Ciudadanos, leftist party Más País, Catalonian parties ERC, CUP and Junts per Catalunya, Basque parties PNV and EH Bildu, and Galician party BNG, all voted in favour.

The conservative parties PP and UPN and far-right Vox voted against it. Vox has announced that they will file an appeal of unconstitutionality against the text.

The law, which has yet to be approved by the Senate, although it is expected to do so, could come into force in the first months of 2021.

During the vote, dozens of people gathered outside the Parliament building to protest against the measure with posters that read: “Government of death”.

Defending the law presented by the government, the PSOE parlamentarian María Luisa Carcedo, pointed out that the text “absolutely guarantees the patient rights” and that it is "the patient who decides in a situation of extreme suffering”.

PP deputy José Ignacio Echániz responded that “without universal access to palliative care there is no choice, no freedom because the only option offered to patients is euthanasia”. “The level of civilisation and maturity of a country is measured by how it treats the most vulnerable”, he added.

The Minister of Health, Salvador Illa, described the law as “a response to a very transversal demand from Spanish society”. He also stressed that, once the law is approved by the Senate, euthanasia will be included as a “benefit” of the National Health System.

Response to the Bioethics Committee

Asked about the negative report published in October by the Spanish Bioethics Committee, Carcedo confirmed the executive's rejection of the recommendations of this official advisory body, saying: “Of course we have read the Bioethics Committee's report but it seems that they have not read the law”.

In the document, the Bioethics Committee warned that “there are solid health, ethical, legal, economic and social reasons to reject the transformation of euthanasia into a subjective right and a public service”.

Prior to the Bioethics Committee's report, the Spanish Evangelical Alliance (AEE) had already released a statement calling on the government to promote the development of model for terminally ill patients that combines access to palliative care with family and economic support.

“The number of patients who consider euthanasia as an option diminishes drastically if the alleviation of pain is facilitated, and human accompaniment and resources to combat hopelessness are offered”, the evangelical body said.

Speaking of the impact of the law's approval on society the AEE warns that “it is dangerous to build a social opinion that says that terminal patients are a burden”.

The law states that anyone with “terminal or incurable illness causing intolerable physical and mental suffering” will have access to euthanasia.

According to the executive director of Areopago Protestante and medical doctor, Pedro Tarquis, “the key point here is the word intolerable, as it is a totally subjective assessment of the patient that can justify euthanasia in any serious and incurable disease”.

Furthermore, “it is more than questionable whether the decision of the patient is free and voluntary. The lack of social and health support for chronic and incurable problems may lead to see euthanasia as the only possible final solution”, Tarquis writes.

“The devaluation of human life, as it already happens with the 'unborn', will undoubtedly bring a poor ethic of personal and social values that will lead to decisions in which human life itself loses its meaning in the face of pragmatism”, Tarquis concludes.

The law will allow access to euthanasia to anyone suffering from a “terminal or incurable illness causing intolerable physical and mental suffering”, although it does not specify the criterion for determining what is “intolerable”.

Such people must be of legal age and have Spanish nationality, a legal residence permit or a legal registration certificate which confirms that they have been in Spanish territory for more than twelve months.

Being a “benefit” of the National Health System, euthanasia may also be practised in private centres and at home. Individuals must first submit two written requests, which must be approved by the doctor in charge of the case and a medical consultant, then, euthanasia can be applied within a maximum of 32 days.

In the event that the patient is “not in full possession of his or her faculties”, the doctor may submit the request through the “living will or a legally equivalent document”.

The law also allows to reverse the request whenever the patient wants to do so, as well as the conscientious objection of those health professionals who reject this practice. They will have to make their request in writing first and a “Register of objecting health professionals” will be set.