Some of the criticisms that can be made against the Acts of Nicaea II, specifically its use and interpretation of historical sources and its claim to be an ecumenical council. 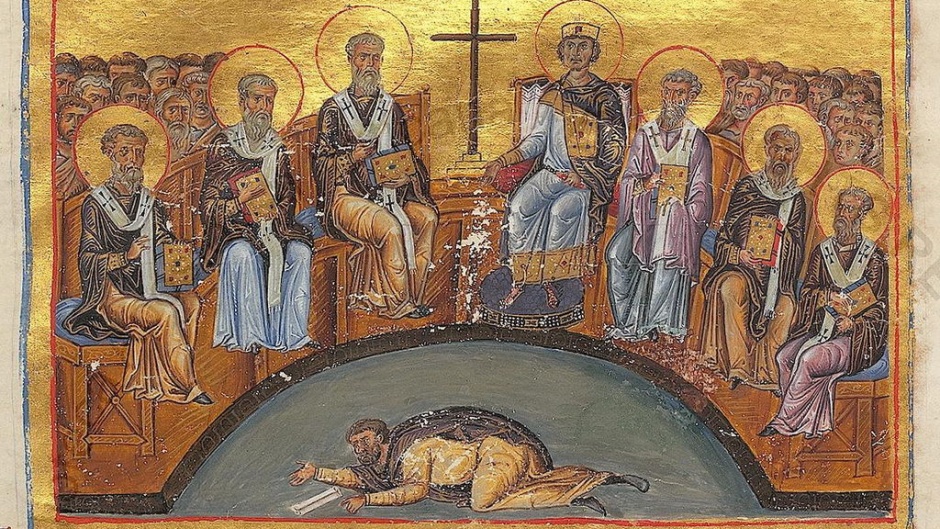 Depiction of the Second Council of Nicaea from the Menologion of Basil II.. / Anonymous. Wikipedia, CCO.

In 2020, Richard Price published the first English translation of the Acts (“minutes”) of the Second Council of Nicaea of 787 in over 150 years. 1

This Council famously decreed that the veneration of icons was part of the Apostolic faith and therefore a necessary component of Christian doctrine and practice. 2

Since the Reformation, Protestants generally have rejected Nicaea II, and it has often been at the center of Protestant–Orthodox ecumenical dialogue.

The Acts provide crucial contextual information regarding the Council’s decision-making process, use of sources, and other important matters.

In this brief article, I would like to summarize some of the criticisms that can be made against the Acts of Nicaea II, specifically its use and interpretation of historical sources and its claim to be an ecumenical council.

Many of the council’s shortcomings are pointed out by Price himself, and the fact that he is a Roman Catholic priest who subscribes to this council means that the following criticisms do not come from a Protestant bias, but rather enjoy some degree of objectivity.

For those interested, I have included references to Price’s work throughout the article. 3

1. Seven methodological and factual errors at Nicaea II regarding the use and interpretation of historical sources

In what follows, I would like to summarize seven important methodological and factual errors in the Acts of Nicaea II.

The reason why this is important is that a crucial component of Nicaea II’s argument in favor of the veneration of icons was its claim to be simply expressing what the Church had always taught and believed since the time of Christ and the Apostles (Price, 480).

In other words, Nicaea II was so adamant about the rightness of its claims because they thought that they were upholding the historic doctrine and practice of the Church.

Therefore, to the extent that the validity of Nicaea II’s argument depends on the correct use and interpretation of historical sources, any legitimate criticism of its historical methodology ought to be taken seriously.

Since the Middle Ages, Nicaea II has been referred to as the seventh ecumenical council. 7

The purpose of this article has been to criticize Nicaea II on two basic fronts: its handling of historical sources and its claim to be an ecumenical council.

To the extent that the validity of Nicaea II’s fundamental affirmation depends on historical continuity with the pre-Nicaea II Church, at best only a weak argument can be made.

Similarly, to the extent that Nicaea II’s claim to be an ecumenical council depends on its subsequent reception, again only a weak argument can be made.

However, this does not necessarily settle the issue, since Nicaea II also presented biblical arguments in favor of its position, and if these arguments are correct, then regardless of its historical continuity and subsequent reception, it is correct and ought to be followed.

Additionally, Nicaea II also maintained an important distinction between “veneration” and “worship”, something which is lost on many critics of the council. 12

These two issues, the Scriptural data and the correct meaning and practice of icon veneration (including what is essential to veneration and what is secondary and culturally derived), could be a way to overcome all of Nicaea II’s historical deficiencies.

Scripture and tradition must continue to guide Christ’s Church, and I think that there is much conversation to be had on both sides of the debate. May God grant us all a deeper understanding of his Truth.

1.  Richard Price, The Acts of the Second Council of Nicaea (787) (Liverpool University Press, 2020). The previous translation was John Mendham, The Seventh General Council, the Second of Nicaea … with copious notes from the “Caroline Books” (London, 1849).

2.  “By decreeing at an ecumenical council that images must be set up in churches and venerated, Nicaea II had implied that image veneration is an essential part of the Christian faith” (Price, 73).

3.  Richard Price briefly corresponded with me over email, and was very helpful and friendly. My overall pessimistic assessment of Nicaea II does not necessarily reflect his own.

6. During its Sixth Session, Nicaea II responded to the Council of Hiereia’s patristic quotations, which were important iconoclast passages of the time (Price, 496–521).

7.  Although it should be remembered that the Council of Hiereia was called the seventh ecumenical council in the 8th and 9th centuries in the East.

8.  This may have been due to the difficulty of communicating with these bishops due to their Arab rulers.

9.  Price notes that the Synod of Constantinople of 815, which reinstated the iconoclast Council of Hiereia, enjoyed “immediate acceptance […] by the overwhelming majority of bishops, clergy and monks”, and thus “We may presume that […] the claim of Nicaea II that a failure to venerate images was an actual heresy had failed to stick” (62). Germanos would be an example of a “moderate iconophile” who didn’t think that iconodulism was idolatrous, but neither would argue that it was required (Price, 250–251).

10.  This was, essentially, Gregory the Great’s position as well. Interestingly, this is not too far from Hiereia’s position; Prices writes, “But the prime concern of the Byzantine iconoclasts was not to destroy images – and we have seen that the extent of actual destruction is unknown – but to stop their veneration” (18).

12. Apparently, the distinction between “worship” (latreia) and “veneration” (proskunesis) went back to the late sixth century with Patriarch Anastasios of Antioch, or early to mid-seventh century with Leontios of Neapolis (Price, 301, 553).