What is the Islamic caliphate and why should Christians care?

A number of Muslim groups are actively seeking a Caliphate, although their conceptions of it differ. These groups include Al-Qa’ida, Daesh (IS), Hizb ut Tahrir, and the Muslim Brotherhood. 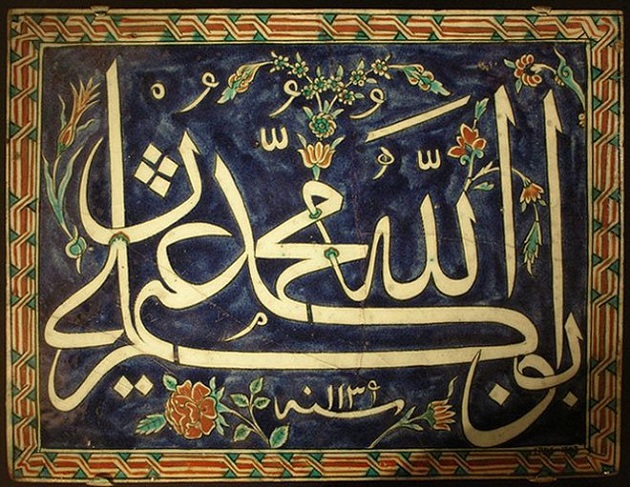 Arabic writing on a fritware tile, depicting the names of God, Muhammad and the first caliphs. Istanbul, Turkey, c. 1727.

The term ‘Caliphate’ has become more familiar over the last 2-3 years due to the rise and now decline of Daesh/Islamic State (IS).

However, a global Caliphate has been the acknowledged aim of a number of other Muslim activist and terrorist groups for the last 15-20 years. Indeed, the desire for a Caliphate has been an aspiration for some Muslims going right back into history.

What is the Caliphate?

Meaning ‘vice-regent’, ’deputy’, or ‘successor’ in Arabic, ‘Caliph’ was the title given to the heads of the Muslim community, the ‘Umma’, following the death of Muhammad. There are very few references to it in the Qur’an. It is only applied to an individual once as a title—the Prophet David in Q38.26. It is applied to all Muslims in Q2.30 (the creation story, in which Caliph is the title given to the humans who were to rule earth as vice-regents of Allah).

Two recognised dynasties of (Sunni) Caliphs followed the first four ‘rightly guided’ (rashidun) Caliphs: the Umayyads and Abbasids. Their rule came to an end with the capture of Baghdad by the Mongols in 1258.

From that time on, a number of Muslim dynasties claimed the title ‘Caliph’, the final one being the Ottoman Sultans in Turkey. Before the title was finally abolished in 1924 following the Turkish defeat in the First World War and its shift to a secular presidency, Islamic revivalism had already begun. So by the time the title was abolished, the Caliphate had re-acquired a kind of trans-national communal leadership standing that it had not enjoyed since its earliest years. The abolition of the post therefore left a gap in Sunni Muslim leadership at exactly the moment when revivalism was beginning to gather pace.

Very few polls have asked Muslim populations about their desire for a Caliphate specifically. Those that have been conducted indicate substantial support for the concept, even if there is less support for groups such as IS which claim to be creating one. A Gallup poll of Muslims in Egypt, Morocco, Pakistan, and Indonesia conducted in 2006 found that 65% of those surveyed wanted to unify all Muslims under a Caliphate. A poll of British Muslim students by The Daily Telegraph in 2008 found 33% of respondents desired a Caliphate.

It is reasonable to connect support for IS or a desire for a ‘shari’a state’ to a desire for a Caliphate, as the Caliphate (especially that of the first four Caliphs) represents the ‘ideal’ Islamic state where, according to Muslims of this persuasion, shari’a was the state law of the Umma. Recent polls across the Middle East and other Muslim-majority states have found significant support for an ‘Islamic state’. For example, a poll by the MacDonald Laurier Institute published in 2011 found that 62% of Canadian Muslims desired shari’a in Canada.

A number of Muslim groups are actively seeking a Caliphate, although their conceptions of it differ. These groups include (but are not limited to) Al-Qa’ida, IS, Hizb ut Tahrir, and the Muslim Brotherhood. When the Muslim Brotherhood briefly held power in Egypt in 2012-13 they quickly moved to establish shari’a as the law of the land. Even groups that are generally more nationalistic than globally orientated, such as the Taliban and Hamas, are also seeking to establish Islamic states.

There are three main differences among these groups:

1. The methods they are seeking to establish a caliphate. IS uses violent confrontation whereas Hizb-ut Tahrir and the Muslim Brotherhood are working through established political systems in order to bring about their aims.

2. The nature of the manifested political system that would embody the ‘ideal’ Caliphate.

Measuring the support that these individual groups enjoy among the global Muslim population is almost impossible. However, a poll published by the highly respected Pew Research Centre in 2015 found that, although there was considerable variation across Muslim majority states, an average of 10% of respondents reported a favourable view of IS. In those same states, between 99% (Lebanon) and 28% (Pakistan) had a negative view of IS, with anywhere between 1% (Lebanon) and 62% (Pakistan) of respondents not able to give a firm view. This figure of 10% approximately coalesces with the number of Muslims who adhere to the Hanbali interpretation of shari’a—the form practised in Saudi Arabia and most associated with groups such as Hamas, the Taliban, the Muslim Brotherhood, al-Qa’ida and the Deobandis.

The desire for a Caliphate, or Islamic state in some form, is not confined to terrorist groups or other proscribed organisations; it also exists in states such as Saudi Arabia and Iran. Neither would self-describe as a Caliphate, but their desire to be seen as ‘pure Islamic states’ arises from the same aspiration. The new arrival on the scene is President Recep Tayyip Erdogan’s Turkey.

Erdogan has talked openly of re-creating the Ottoman Empire, for example in the speech he made at the Foreign Policy Centre in Washington DC in 2014.[1] He has also systematically sought to expunge the name of the post-First World War secularising leader of Turkey, Mustafa Kemal ‘Ataturk’. Erdogan’s argument for the re-creation of the Ottoman Empire is based upon a version of Ottoman history that could be best described as containing blind spots, particularly regarding its treatment of religious minorities.

Erdogan’s utopian vision differs from that of the non-state groups mentioned above in that his harks back to the more recent past, whereas the Muslim Brotherhood and others seek a return to the perceived purity of the Rashidun Caliphate. This represents for Muslims an era where Islam was a powerful global player, even though the height of the Muslim empire came under the Abbasids. That vision is attractive for those Muslims who cast the rise of the European powers and later US domination as a humiliation of their faith. Since it also involves a return to the practice of faith in its ‘purest’ form, the Caliphate represents a time of doctrinal purity coupled with political ascendency.

Those Muslims who sympathise with IS and Al-Qa’ida propose that Islam rotted theologically from the inside over centuries as ‘innovative’ practices (such as Sufism) were allowed to flourish. The revival of the Caliphate is therefore not simply about restoring Muslim pride and power, but also about returning to a practice of Islam that would be recognised by Muhammad and his immediate successors. It is thus no coincidence that in those lands under the rule of Muslims who claim to adhere to the ‘purest’ form of Islam, such as IS and Wahhabi Saudi Arabia, Sufis, Ahmadiyyas and Shi’a are persecuted just as much as non-Muslims, for they are seen as corrupting Islam.

It is probable that in the short term IS will be defeated, insofar as the territory under its control will be entirely wrested from it. However, IS has already begun to ‘franchise’ itself, with offshoots now flourishing in the chaos of post-Qadhafi Libya, as well as fighters slipping into the West to carry out attacks there.

Moreover, the defeat of IS militarily will not end the search for a Sunni Muslim Caliphate. As long as there are Muslims who espouse a literalist interpretation of the Qur’an and Sunnah (those parts of the Hadith—the traditions about Muhammed, his wives and Companions—which can be directly attributed to Muhammad himself), the aspiration for a Caliphate will continue to draw some towards its recreation, whether through violent or non-violent means.

The prominent French academic Francois Burgat has argued that the violence is symptomatic of the decline of Islam and that the lack of success of recent ‘jihads’ will ultimately turn Muslims off  Islam itself.[2] There can be no doubt that increasing numbers of Muslims are turning away from Islam.[3] However, the aspiration for a Caliphate is so potent that it is likely to continue in some form into the forseeable future.

How should the church respond?

Clearly the principal tools of the church in such a situation, as always, are love in action and prayer (including praying for those Christians living under the Caliphate today). Beyond these responses, there are a number of specific things that Christians can do.

They should love Muslims enough to share the gospel of Christ with them, such as through the work being done by some individual churches and agencies such as Mahabba,[4] Interserve, and Frontiers. The only long-term answer to the struggle to achieve a new Caliphate is the gospel. In order to present it to Muslims in action and word, Christians need to get over our general fear of evangelism and our specific fear of evangelism to Muslims.

The aspiration for the Caliphate speaks to a longing for ‘greatness’. This could be seen either as a re-assertion of political dominance or a desire to see Islam ‘respected’ once again. There is a sense of impotent anger which radicalisers seek to exploit in funneling people towards a violent response. However, there is also a potential opportunity here for evangelism from at least three angles:

Christians believe that spiritual struggle is the key struggle which will ultimately bring us through judgment to be with God forever and that this has been enabled by God’s sacrifice for us, rather than any works we have done.

The prestige of our God’s name is not dependent on the conquest of territory, or on displays of human strength. Indeed the opposite is true: God’s power is made manifest through our weakness.

We also need to make policymakers aware of the implications of the Caliphate and the breadth of support for it. They need to be aware of the long-term, religious aspiration that lies behind the Caliphate in trying to form effective counter-radicalisation strategies.

However, ultimately, government strategies or policies cannot be the long-term solution. Governments cannot be seen as making value judgments about any one religion. At best, they can counter suspicions of democratic pluralism, the whole concept of democracy—the idea that sovereignty rests with representatives of the people—being anathema to the Caliphate worldview.

They can also disrupt networks and take military action to defeat those claiming to be fighting for a Caliphate. This will serve to undermine the ‘validity’ of the Caliphate vision for some Muslims, as battlefield success is seen as a sign of the favour of God and the greater power of one God over another.

However, only the gospel holds out the prospect of a long-term solution to radicalisation as embodied in the aspiration of the Caliphate.

The author (name withheld by request) is a researcher and writer on the inter-connected fields of identity, radicalisation, global religious trends and religious liberty. He has written a number of books and articles, and is a regular public speaker.

This article was first published in the May 2017 issue of the Lausanne Movement Global Analysis magazine.

3. Editor’s Note: See article by a Syrian pastor entitled ‘The Crisis in Syria’ in January 2016 issue of Lausanne Global Analysis. ↑

Published in: Evangelical Focus - Lausanne Movement - What is the Islamic caliphate and why should Christians care?