La Palma volcano forces evacuation of 6,000: “We are in the hands of God”

The lava has destroyed around 200 homes in the Spanish Canary island. Evangelicals in La Palma distribute emergency aid. “We ask for prayer”, says a pastor. 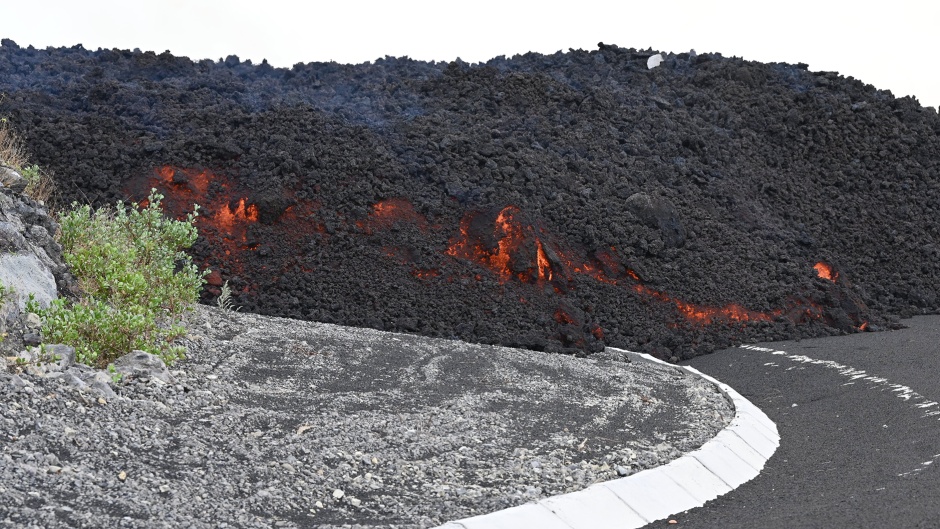 The La Cumbre Vieja volcano that is erupting since Sunday in the Canary island of La Palma (Spain) could be active for weeks, experts are saying.

48 hours after exploding for the first time, there are five cracks that spew tons of lava. The destruction can be seen in spectacular images taken by the police from the air, as everything is destroyed under a lengua (tongue) of lava advancing at over 1,000 ºC degrees of termperature: houses, roads, infrastructures.

Over 160 homes have been destroyed so far and at least 6,000 people have been evacuated in four municipalities. Temporary shelters have been set up.

Experts expect the lava to reach the sea in the upcoming hours, which could cause dangerous chemical reactions.

Evangelical pastor: “Many people will lose everything”

Spanish news website Protestante Digital spoke to an evangelical pastor in La Palma. “Our place of worship is about 7 kilometres away from where the first eruption happened, it is affecting many people from the churches who live in the zone”.

Pedro Ángel Rodríguez leads the Evangelical Baptist Church of La Palma and is also a representative of the Evangelical Council of the Canary Islands. “A young man from our church lives in the neighbourhood of Puerto Naos, a coastal place that has been isolated. Although he wanted to go pick up his belongings, he no longer could do it because of the evacuation”, he explained. 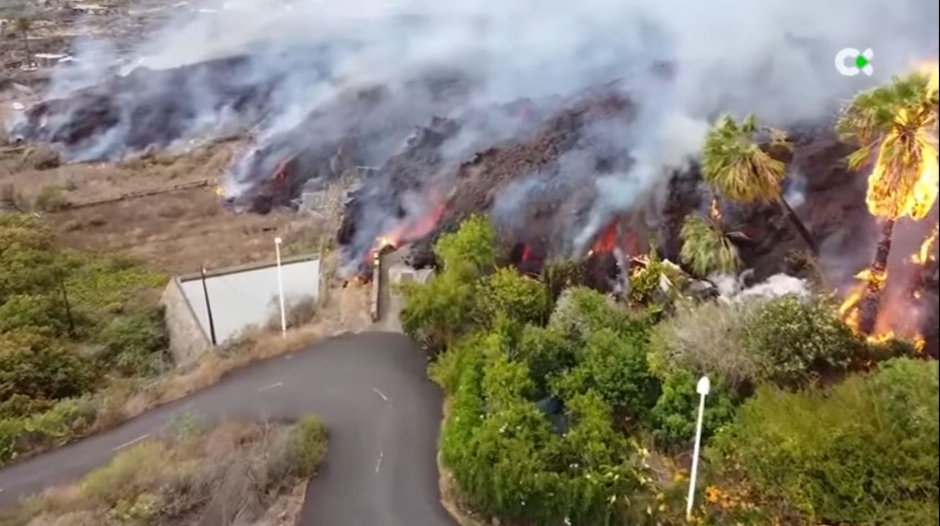 Lava of the La Palma volcano devours a house and its garden. / Canary Islands Public Television.

The population feels the impact of an eruption that had not happened since 1971. “We are deeply troubled thinking about the material damages, many people will lose everything”, the pastor said.

There are seven evangelical worship places in the island, distributed throughout several municipalities, populated by 85,000 people. “In the case of the Baptist Church of La Palma, we have three worship places: in Santa Cruz (capital), Los Llanos and Tijarafe”, none of them has been affected by the eruption so far.

The church has immediately contacted the authorities to offer their support. “We already had a clothes and food bank, working with the town hall, but now we are asking believers to help by giving hygiene products and light clothes”, says Rodríguez, “these are the most immediate needs at the moment”.

His church is also offering volunteers who speak German, because many of the affected by the destruction of the lava were elderly retired foreigners living in the Spanish island. “Already 166 houses have been devoured by the lava, and many of these people are Germans, which lose their belongings, and this produces great anxiety. We have to be available for them”.

Prayer and trust in God

Pedro Ángel Rodríguez also speaks of the spiritual accompaniment in this difficult situation. “We want to transmit calm, tranquillity, and confidence, because we are in the hands of the Lord at all times. I think knowing this helps both the believers and our friends”.

“We ask believers to pray for us”, adds the pastor. “Firstly, that people do not harden their hearts with what is happening. Some only think about God when tragedies happen, but we should be thankful that there have not been deaths. But for many, the material loss is huge. It is impressing to see that the lava covers your house. We ask for prayer for all of them”.

“The Covid-19, the fires one month ago, now the volcano… Anything can happen, but as believers, we want to share that God knows what is happening, and He will protect us, or give us the strength to let go and trust in his mercy, be it for living or dying”, concludes Pedro Ángel Rodríguez.

The Canary Islands government has estimated the material losses after the eruption in around 400 million euros. The European Union has already announced it will send financial support to the island. 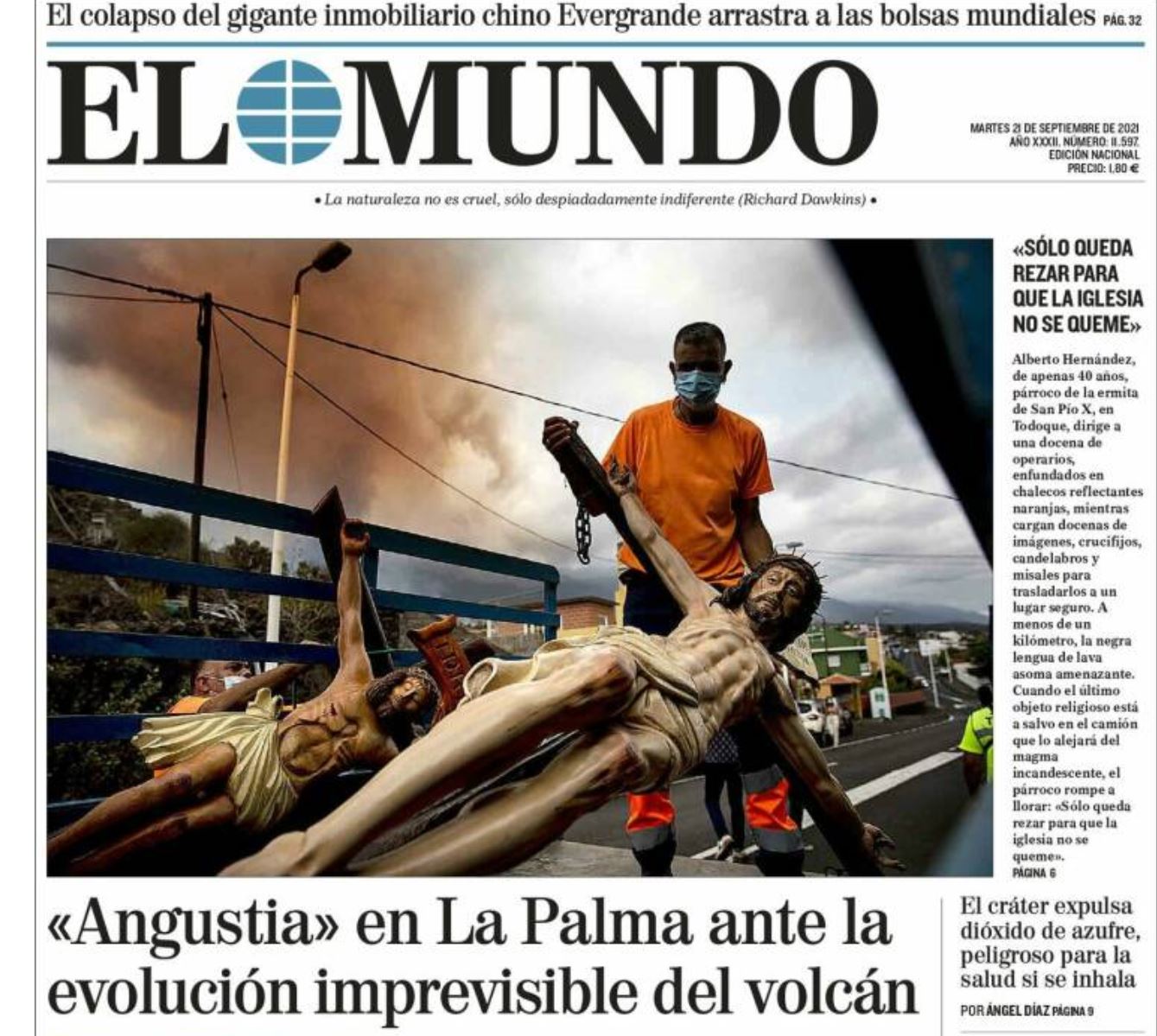 The front page of Spanish newspaper El Mundo on Tuesday 21 September showed one of the pictures the crisis. Catholic images were being evacuated from a temple in the town of Todoque.

“We only can pray that the church does not burn down”, the priest told the newspaper.

Published in: Evangelical Focus - life & tech - La Palma volcano forces evacuation of 6,000: “We are in the hands of God”